A couple months ago, I found this floating around on Pinterest. It was adorable…and I immediately thought of my mother-in-law, whose birthday was coming up.

What is it you do when you can’t afford to buy something? You  make it.

I was originally going to make it just like that, but I couldn’t tell the difference between glass and plastic. I bought an extension for my power drill that looked like Hole Saw because the person at Lowe’s said it would cut through plastic… and then I attempted to cut a hole in a piece of what I assumed was plastic. It wasn’t. It shattered immediately.

So I decided that she didn’t need a hole to put the corks in…that it could just be a decorative piece, rather than an “interactive” piece. And then I came up with something I was relatively happy with. 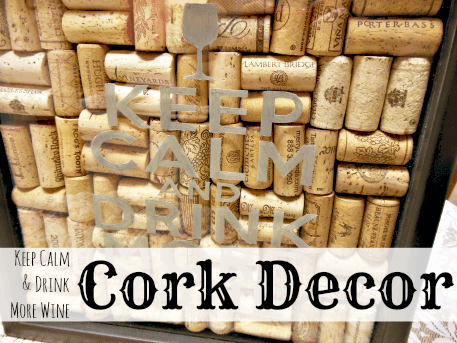 Step 01: I made my own stencil out of contact paper. If you bought a stencil, skip this step.

I created a text stencil in Microsoft Word. 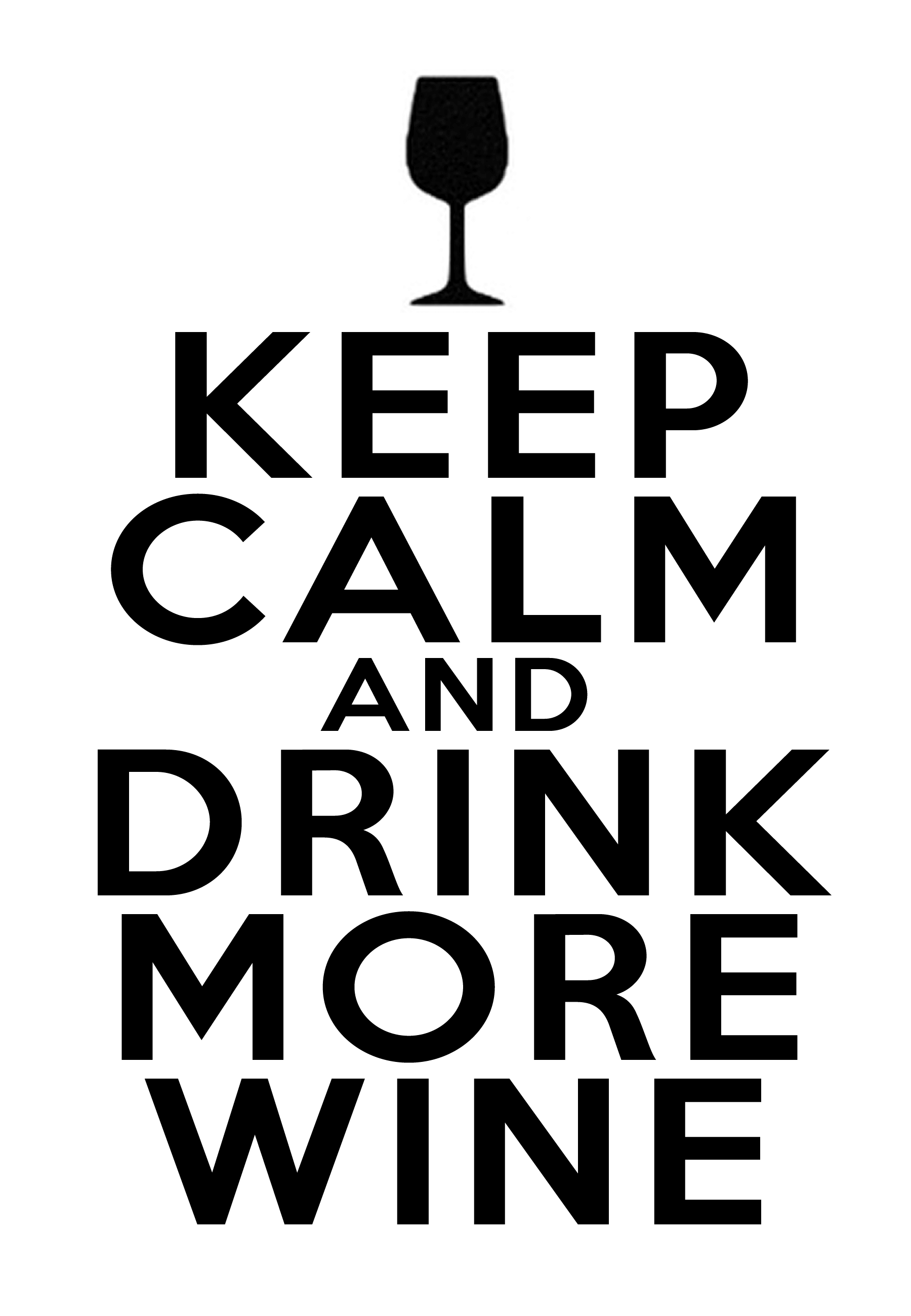 Click for a larger size. Feel free to print and use this for your personal needs.

Then I put a piece of contact paper on a cutting board, taped it down, and taped the print over the contact paper. Using an X-Acto knife, I carefully cut out each letter. 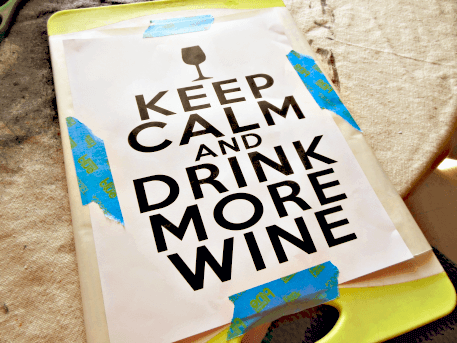 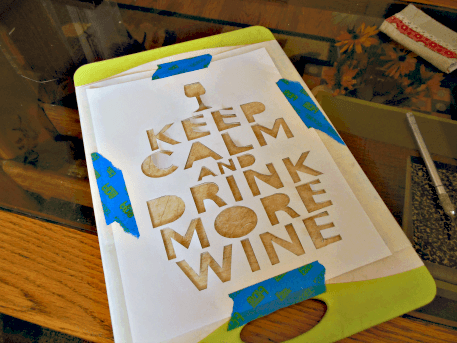 This part took me about an hour. Worth it. Just make sure the ADHESIVE part of the contact paper is facing up…I didn’t and I wound up having to do this step twice.

ALSO! Keep the centers of the letters (like O and R). Put them somewhere safe. Somewhere organized.

Step 02: Remove the backing from the adhesive paper and lay it on the glass. Flatten it out as best as possible and make sure the area around the letters are completely flat so your etching cream doesn’t spread too much. 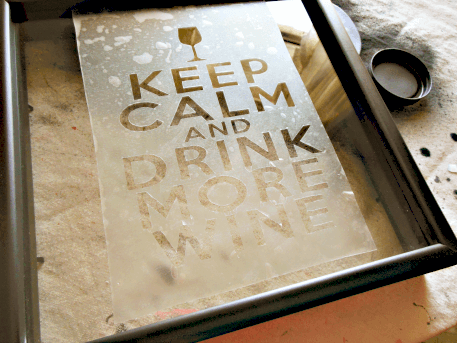 Step 03: Use a clean paint brushes to spread the frost etching effect over the stencil. Let each layer dry before adding another (it only needs about 5 minutes to dry). I recommend 3-5 layers. Once finished, remove the stencil. You can also add a couple drops of paint to tint the cream. I wound up doing this later when I realized the frosting couldn’t be seen with the corks behind it. 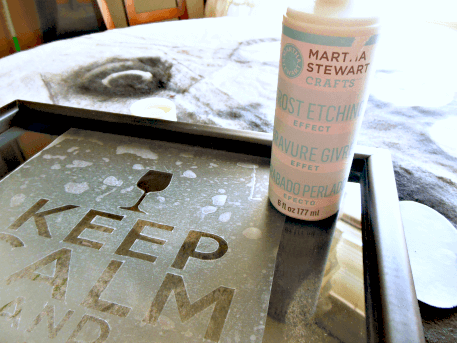 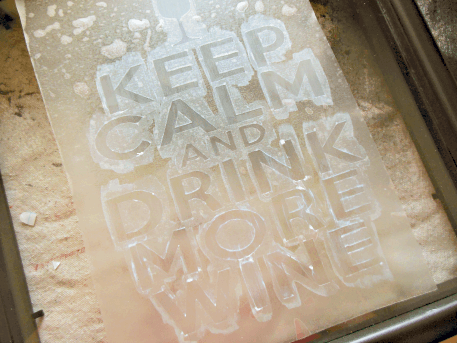 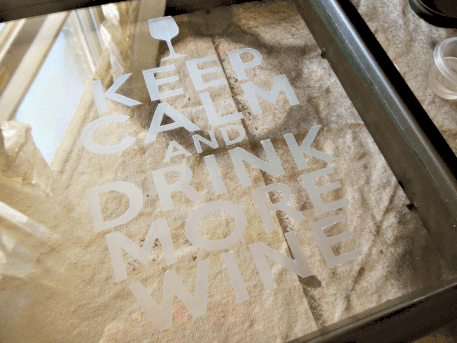 If you see any areas where the cream spread too much, you can use an X-Acto knife to gently scrape it off. If you wound up doing the whole thing wrong, you can scrape it all off. That’s the reason I bought this frosting cream instead of the etching creams with acid.

Step 04: Lay the corks down the way you want them and put the back of the shadowbox back on. 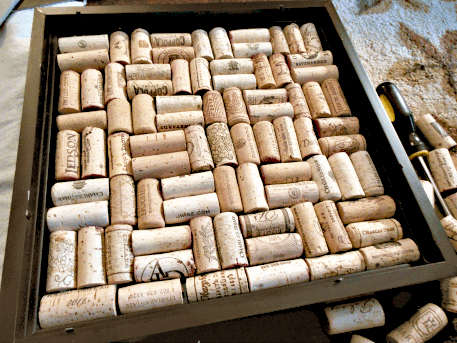 And you’re done! I used a very thin brush to go back over the frost with some paint. 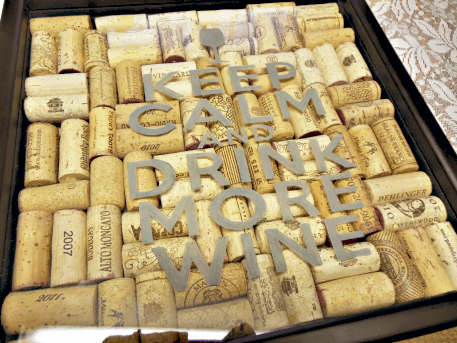 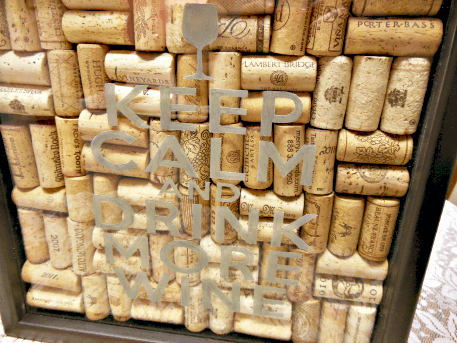 As with all gifts, I won’t tell you how much it cost to make. I will say it was muuuuuuch cheaper than buying it would have been. And my mother-in-law loved it. 😀

Edit 9/25/14: My in-laws built a bar right off their new deck. It’s awesome, though it was apparently a pain for my FIL because my MIL put this cork holder right in the middle of the wall and had him build around it. 😛 Well, it turned out awesome! 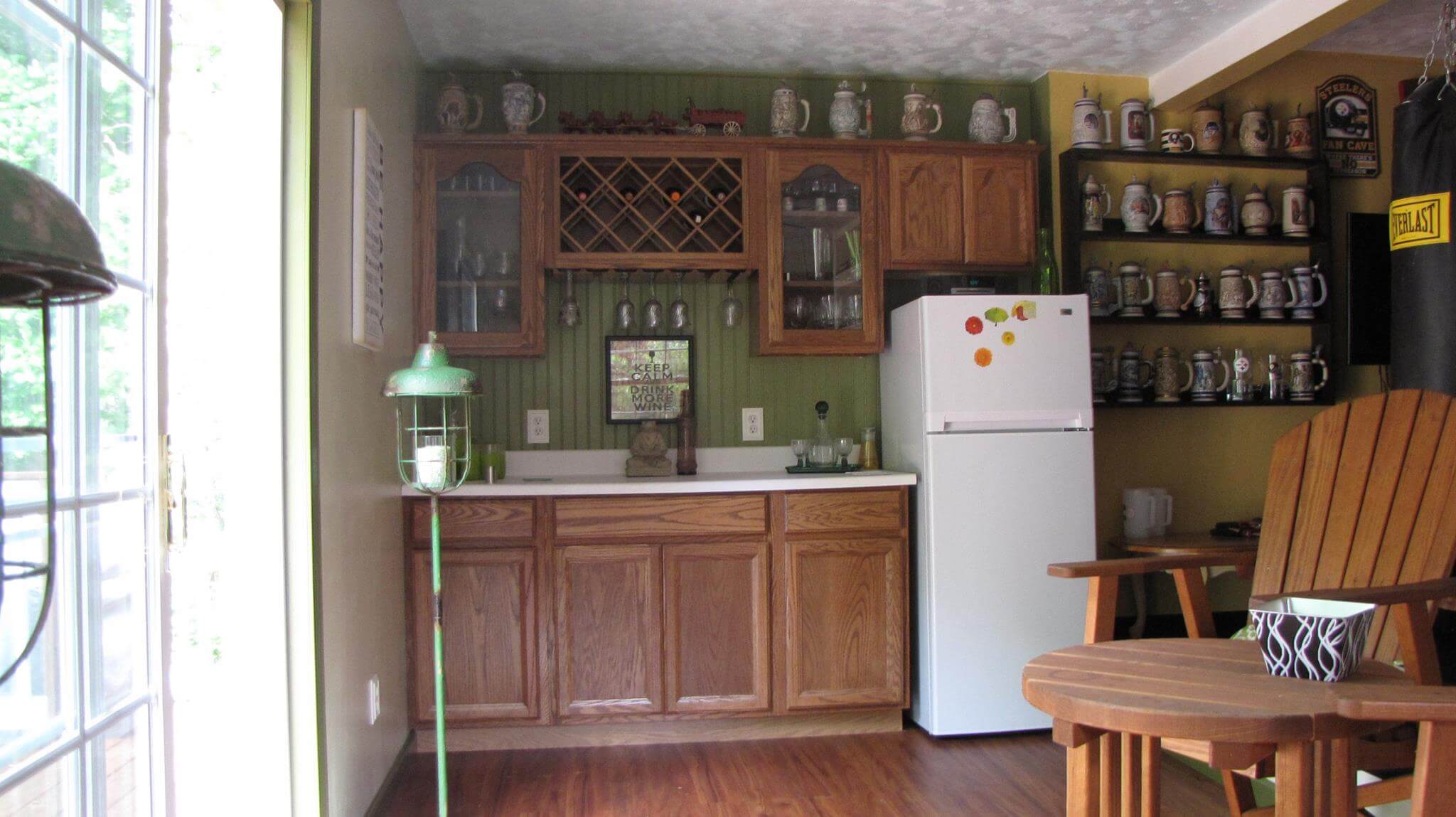 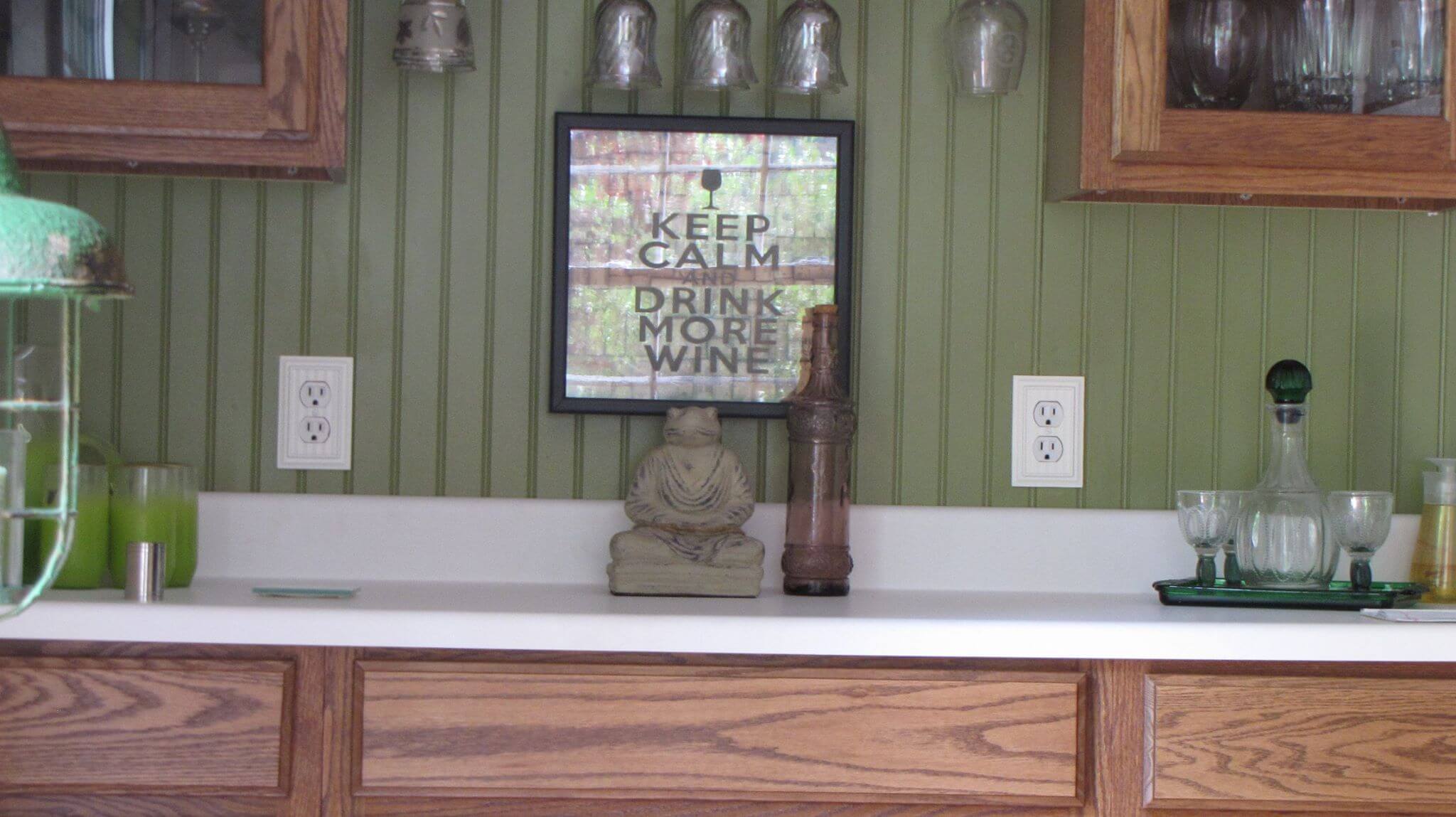 I can’t wait until Zach and I can visit and see it in real life!

Awesome! I love DIY Cork Decor Project 🙂 Thank you for sharing here. I found you via A Lovely Blog Hop –

Hope to read your posts more 🙂

I’m glad you liked it! Thanks for following! 😀

I love how this came out! Nice job.

Hey there, I’m stopping by to let you know you’re featured at the TGIF Link Party this week! I hope you’ll stop by to grab a button and link up again. The party starts at 8pm EST.

Thank you! I will definitely grab a button! 🙂

This looks really good, I love it! What kind of paint did you use? I think I may need to buy some for mine, but not sure what kind to use, thanks.

Thanks! I just used one of those little bottles of acrylic paint. I mixed a couple drops of it into a small portion of the etching cream (a little bit of paint goes a long way in shading the cream, so do it just a little bit at a time to get the color you want). Good luck! 🙂

I absolutely love this! I want to use it for my wedding. I was just curious where you found the shadow box from?

Thank you! I actually got that shadowbox at Wal-Mart, but you can find much nicer ones at Michael’s. And a corky wine wedding sounds ADORABLE!

Very cool! I supply items such as glass etching cream and stencils to crafters and wanted to see if you would test some of my products for free in exchange for feedback. Any interest? These will be shipped directly to you at no cost. Looking forward to hearing your thoughts. Thanks in advance for your reply. Eric

Hi Eric! If you can email me at chelsey@diybudgetgirl.com with your website and company information, I’ll be happy to talk more about this with you.

Will do. Thank you!