Does anyone else carry an emergency sewing kit? I do, but not consistently…and I definitely didn’t always do it. My mother, on the other hand, carries three. Three. In one purse.

You’re probably not as crazy as she is, though. But it is a good idea to keep a tiny sewing kit in your bag. Even if you’re not very good at sewing, nothing motivates you to learn more than having a very important button fall off your blouse at your friend’s wedding. (This didn’t happen to me, but you get what I mean.) You didn’t bring extra clothes because it’s only a wedding. But now you’re popping out of your shirt a bit and no amount of alcohol will keep people from noticing. (In fact, they’re likely to notice more…and then draw everyone else’s attention to it.)

And this is why you need a DIY emergency sewing kit.

Here are some basic things you should always keep in it: 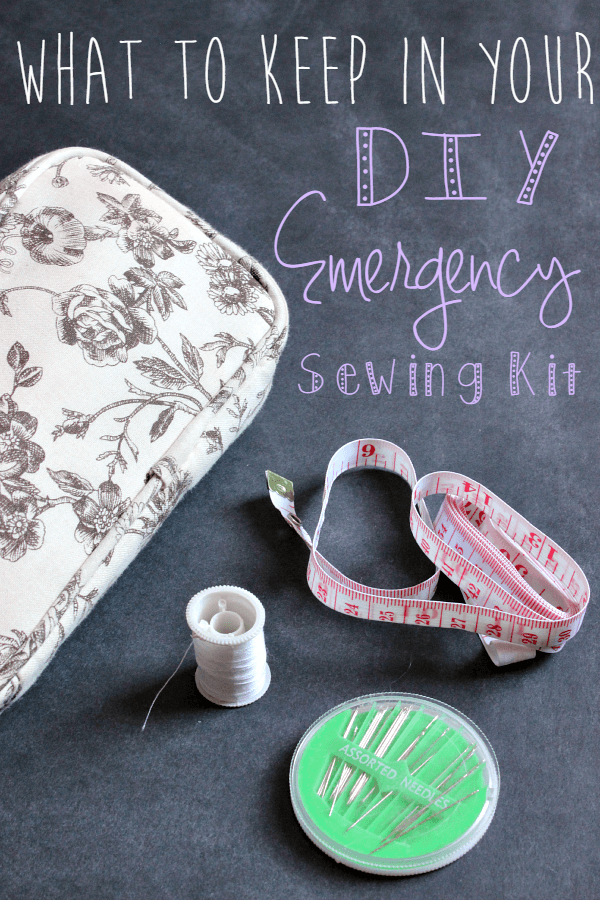 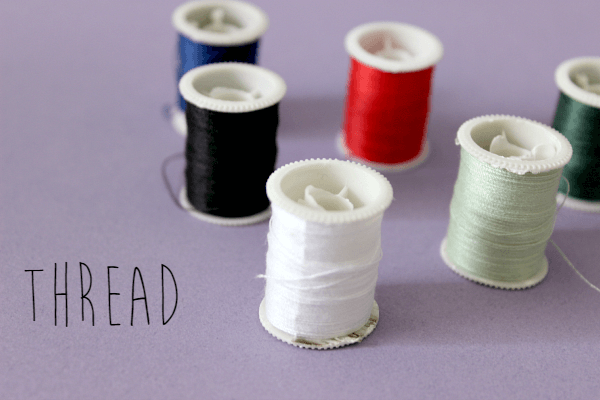 Should I go into detail? (Don’t worry, the list gets better.)

Actually, I will go into a bit of detail.

There are SO MANY different colors of thread. So how many is too many?

For the record, I keep about six on hand. The colors you see above, in fact. I’ve found that those six colors will handle just about any project. However, make a note of which colors are seen most often in your own wardrobe. If you have a pretty even variation, go with the six above…and maybe add some brown thread. 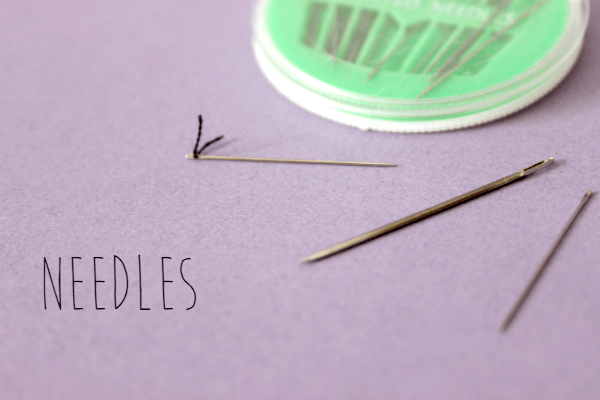 I promise it gets more interesting.

FYI, don’t JUST get the needles that have the large eyes. I know they’re WAY easier to thread, but they aren’t useful for everything. Plus, the larger the needle, the more difficult it will be to push it through the fabric. Get some assorted needles. 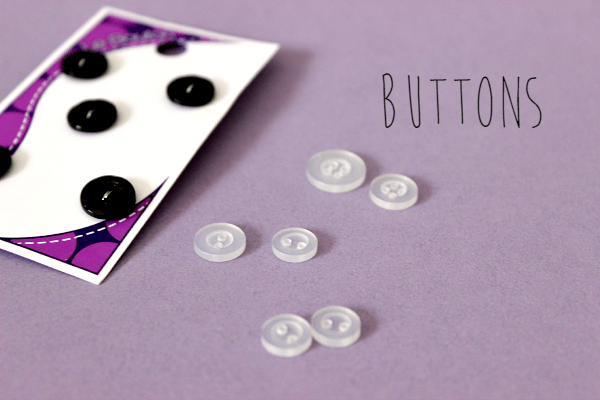 OK, so this one may not be so obvious. But what happens when your button pops off and falls into a lake? (I don’t know why you’re on a lake. Maybe you should drink less.) Anyway, buttons are small. When they pop off suddenly, they get lost easily. So it’s a good idea to keep some spare buttons in your kit. If you’re keeping individuals instead of buying an assorted pack, stick with the basics–white, translucent, black, and brown. Keep a couple of each and you’re golden.

Also, most articles of clothing come with a spare button. Sometimes it’s attached to the tag and sometimes it’s sewn onto the inside of a sleeve or something (so you have a spare, but it can’t be seen). If you have an extra button that isn’t already sewn to your clothes, I recommend doing it yourself. That way, you have a built-in spare.

4. Scissors or a Thread Clipper 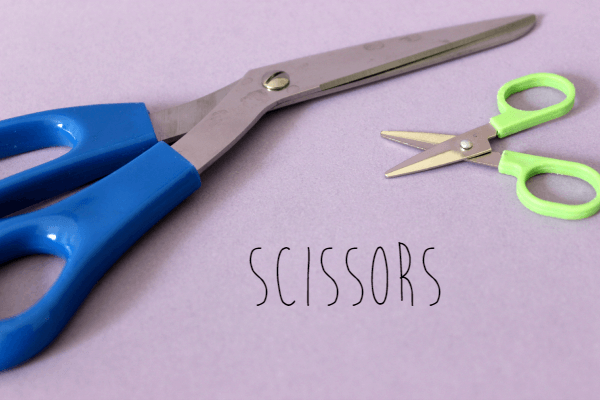 Another one that isn’t quite so obvious. But cutting thread with your teeth isn’t as easy as it looks in the cartoons. Trust me.

A few years ago, I got a pre-made kit, which I don’t recommend. Not everything in it actually works–particularly the scissors (the green ones pictured above). They’re tiny and they’re meant to cut thread, but they’re even more useless than child-safety scissors. My mom has a thread clipper, which is awesome. I definitely recommend keeping something like that instead of normal scissors. 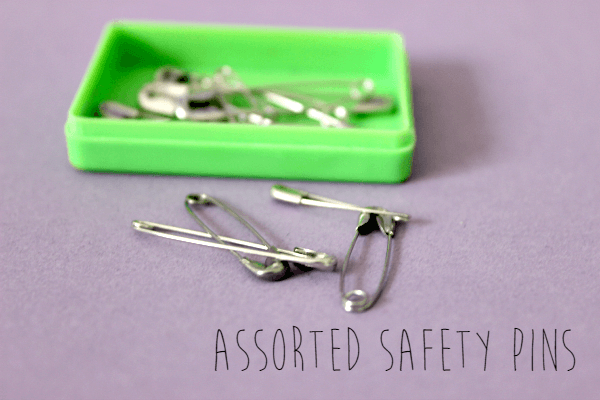 Safety pins are versatile. You can use them to replace the fallen button, but you can also hold the fabric in place if you rip your pants. This happened to my sister-in-law’s boyfriend last winter. They got stuck at our place during a snowstorm and he didn’t have extra jeans. I got out my emergency kit, safety pinned the hole closed, and then sewed it shut. You couldn’t even tell when they had torn. That was the first thing I have ever successfully sewn.

Making sure you have safety pins of different sizes is important. Some clothes, like blouses, just need a small, dainty safety pin that hides well. But if you have a hole in something large or thick, longer, heavier safety pins are needed.

Other things I keep that are less than essential, but still good to have: 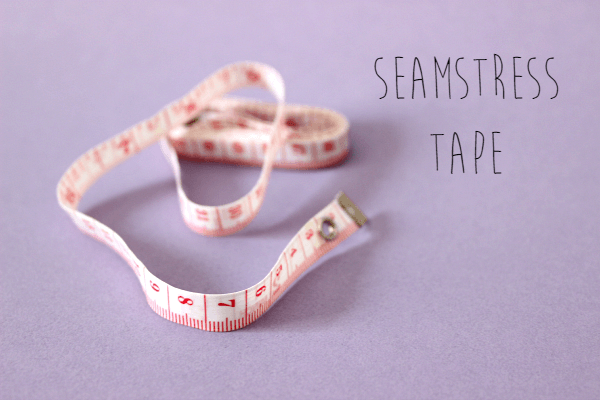 OK, so this isn’t so essential. But it’s incredibly handy! You’d be surprised by the number of times I’ve needed measuring tape while I was out, so I just pulled out my seamstress tape. Yeah, you get weird looks (especially at Home Depot), but it does the job! 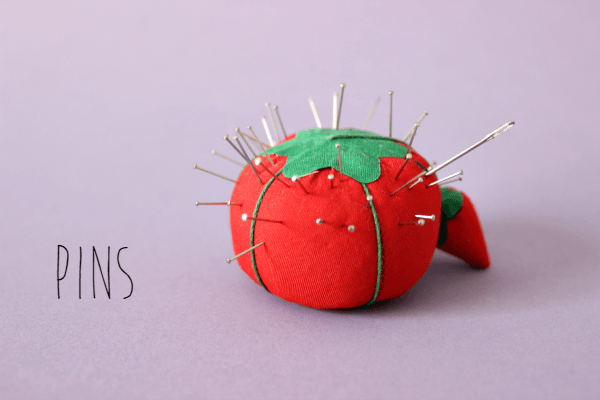 The little ones that look like tinier carpenter nails. Those flannel shirt pillow cases I made last month? I used my emergency kit to make them. (Clearly I am very strict about what constitutes an emergency.) Pins do the same thing as the safety pin thing I mentioned above, except they’re easier to remove as you go and they’re more accurate (since they lay flat with the fabric). They’re very handy if you have more than 5 minutes to correct your wardrobe malfunction.

The pins are kept in the little green box with my safety pins. The tomato is handy at home. 🙂

And of course, you need…

Something to keep it all in. 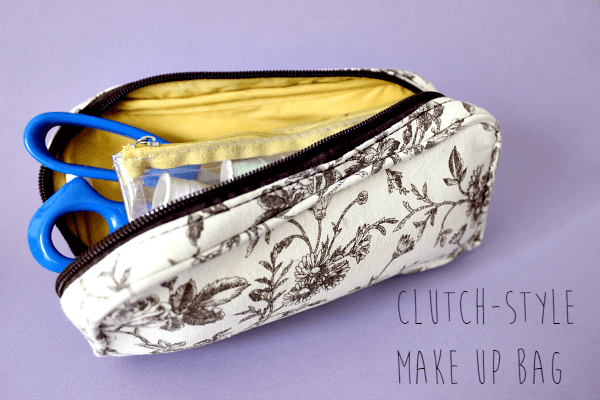 I use an old clutch-style make-up bag. But you can use a variety of things, from an old Altoids tin to a pot holder.

But the bag is adorable.

Do you have an emergency sewing kit? What do you keep in it? 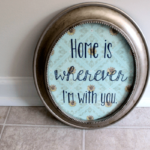 Home is Wherever I’m With You Printable 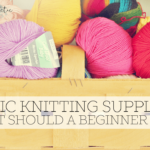 I had them but I hate sewing! I always wait till i have no choice before I whip it out.
Thanks for your tips! Thank you for sharing it with us #Pintorials

If only I could sew better than I did.

Great ideas! Pinned and tweeted. Thank you for being a part of our party. I hope to see you on Monday at 7 pm. It wouldn’t be a party without you!
Happy Sunday! Lou Lou Girls

I agree! I have all those things with me all the time too. I actually had someone at work ask me if I could sew up his outer shirt for him once, haha. Good things to have on hand. Thanks for linking up to Snickerdoodle Sunday!

Everyone should have a simple sewing kit at least. Love the pretty bag you put your supplies in. Thanks for sharing at the party @DearCreatives pinned

I agree! Thank you, Theresa! 🙂

I’m going to have to start carrying my sewing kit with me, again. I never used it, so I stopped carrying it. But, now that they carry some really cute ones at the craft stores now, maybe I’ll just have to go do a little shopping. Thanks for the reminder. 🙂