I’m having a wisdom tooth extracted this afternoon, so I’m going to try to set up the rest of this week’s posts before that happens. Just in case. 😛

I’ve been really into stuffing things with other things…particularly zucchini. Because zucchini is good. This time around, I stuffed it with enchilada filling. Basically, make enchilada filling the way you normally would and put it into a zucchini instead of a tortilla. Here’s how I did it! 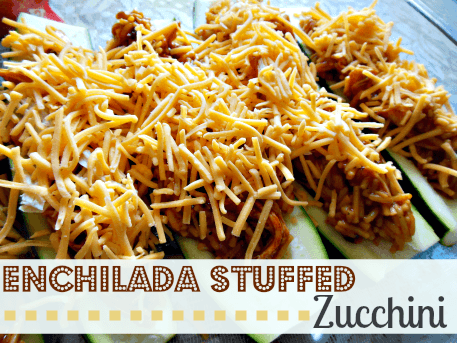 Step 02: Boil and pull the chicken–use as much as you want. I decided to use a little and save the rest for other meals. Make your Mexican rice (I used Rice Sides, which are $1 each at the grocery store). Combine them with the enchilada sauce in a container and then spoon into the zucchini halves.

Step 03: Bake for about 35-45 minutes. Remove from oven, cover in cheese, and let sit until the cheese melts.

This is quite good and it makes a nice dinner all by itself. It has so much flavor and I really didn’t miss the tortillas–though I’m not a huge tortilla fan, anyway.

I have more plans for stuffing zucchinis, so stay tuned. 😉