I tend to stress out over Father’s Day. I always forget that it’s in June and then stores don’t start advertising it until a week before and suddenly I’m scurrying to think of something.

This year I’ve remembered to look up the date (it’s June 16, by the way)…and I think I have an idea of what to get.

Dads are always incredibly difficult to get presents for. I see a ton of homemade things on Pinterest all the time, but let’s be honest, do we really think these are dad-appropriate? Homemade cards, ties, candy in a pretty jar? No. All of those presents were obviously thought up by girls who just have no clue what men like. There are some homemade gifts that would be pretty nice and I’ll get to those in a moment. They seem to be the exception, though, and not the rule (if the lame gifts my Pinterest search brought up has anything to say about it…don’t get your dad M&Ms in a mason jar…it’s not as thoughtful as you might think).

Of course, many simpler gifts are pretty appropriate and meaningful when coming from a young child or toddler. But once you’re an adult, it’s not so easy. Adults tend to be held to higher standards. Who knew? 😛

A tip that I always find helpful when I’m searching for a present for my dad is this: is it useful or fun? I have never met a man who liked home decor (I seriously saw a Father’s Day gift idea that was a wreath…are you kidding me?). The idea of having one more thing sitting in the way is usually fairly irritating to a guy. (This is, of course, not true for all guys. But in my own experience, men don’t actually like home decor items unless it’s really meaningful for or made by a small child.)

But a useful item or an item made for entertainment…they love that. Over the years, I have given my father a long line of crappy gifts that I honestly thought he would like. I can’t remember what any of them are.

As for what works…here’s a list of things most men would appreciate–some are cheap, some are more expensive, and others are free (but require a good bit of effort):

Here’s the biggest problem I have with buying presents: what can I get that won’t weigh him down while he travels? My dad carries a lot of stuff–a duffel bag, a suitcase, a briefcase, a cooler, and a bag for his electronic devices all make up his usual luggage. So whatever I get him either has to be a nice treat for when he finally goes home, or needs to be really useful and very compact so he’ll want to take it with him, but so it doesn’t take up a lot of room.

This year, I’m thinking about some speakers for his iPhone, because he listens to Pandora constantly. I haven’t completely decided, so we’ll see.

Now…all that said, I did find homemade gifts that would be good for a dad whose children are a little older, or even no longer living in his house (which is what I’m going for…there are plenty or DIY gifts for young children, but not so many for adult children).

1. A picture of you (and your siblings) holding the letters that spell “dad.”

This is the lowest on the list, actually. It’s nice, but still probably better if you’re not in your 20’s when you make it. 2. Pictures surrounded by your favorite dad-isms.

My favorite dad-ism: “I oughta knock you back down those stairs.”–when I came up from the basement and got mouthy about doing the laundry. 😛

3. Lucky As Can Be Handprints

This is obviously best done as babies…. But if you can find your old handprints (or footprints) in a baby book or something, then you can scan them to your computer, put them through some photo editing software, print them out (maybe on some nice scrapbook paper), and mod podge them. If you can make it work, I personally think this is the best option (especially for my dad, who loves how small babies’ hands and feet are.) This would be a great Mom gift, too, if you do it with a locket. But the pocket watch is perfect for a dad, especially if you and your siblings have children. You can fill it with family pictures of your individual families, or put individual pictures of you and your kids in it. Dads love to show off pictures of their kids and grandkids (especially their grandkids). This would be a beautiful, unique way to do that without taking up valuable wallet space. 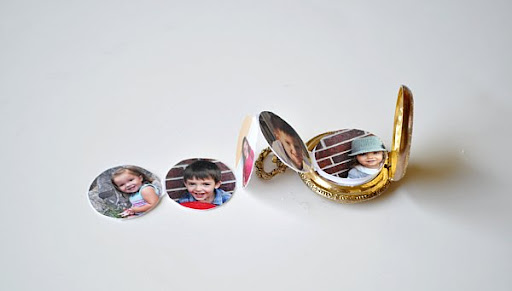 This is great for the dad who travels frequently by plane. Finding your luggage is a huge pain and this would make it much easier.

What are your most successful Father’s Day gifts?