Home Back to Basics Guest Post: How to Fry an Egg

Zach loves eggs. I don’t, though, so I didn’t know how to cook them for YEARS. I can make them over easy (though we always call them “soft fried,” but don’t get into the habit of doing that because no one will ever know what you’re talking about :P), but it was all I knew how to do. So making Zach eggs for breakfast did not come easily. (“You want scrambled eggs for your birthday breakfast? Yeah, you’re on your own, dude.”) I definitely could have used Lydia’s help during the first two or three years of my marriage. 😛

Since her post was kind of long and involved two different aspects of frying eggs, I split it into two parts. (Also, I was having trouble filling out the whole month, so this worked out well. :P) Today she’s going to discuss how to just fry an egg. On Friday, she’ll be back to explain how to scramble eggs. Which I’ve come to discover is a whole different ballgame. Enjoy! 🙂 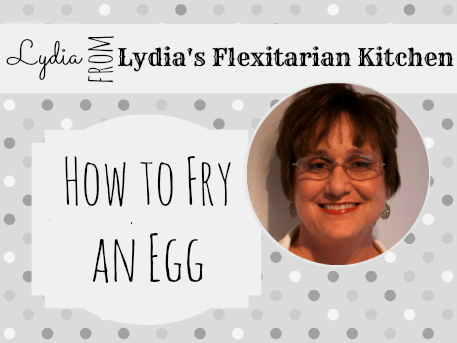 Sunny side up? Over easy? Yolks hard or runny? Whites set or a little runny? Which is your favorite way to eat a fried egg? I prefer mine sunny side up, while Rick likes his over medium. Today we’re going to show you how we fry our eggs. It can be a little daunting to fry an egg if you’ve never done it before. The white tends to spread all over the place and it can be difficult to get the whites to set without overcooking the yolk. Here’s how to fry an egg our way:

The following video should help clarify the instructions.

Could you fry an egg in butter or cooking spray? Absolutely! It’s a great way to reduce calories especially if you use a non-stick pan. You’ll want to manage the heat while the egg is cooking so it doesn’t cook too quickly and stick to the pan. If you can, you want to avoid breaking the yolk, but if it happens it’s not a tragedy. The egg may be ugly, but it’s still edible. If a shell falls into the pan, pick it out as quickly as possible. Besides the obvious breakfast with some toast, a fried egg is awesome over a hash of white or sweet potatoes. If you have leftover spaghetti, reheat it with a little Parmesan cheese and place the fried egg on top. The yolk will run down into the spaghetti and coat the noodles. In the same way, you could top a bed of spinach or other greens with an egg.

Guest Post: What is a roux and how do you make one?

{ FREE Printable } Home is Where You Know How the Shower Works

I can scramble eggs, but that’s it. I’m afraid to make eggs any other way because of how disgusting they might turn out. This is a great post, thanks for sharing!

Haha! I know what you mean! (Though I’m the opposite. I can fry an egg with the yolk broken, but scrambling or doing anything else confuses me. :P) I’m glad you liked it!