Home Back to Basics Guest Post: Recipe for Disaster–Staying Safe in the Kitchen

Guest Post: Recipe for Disaster–Staying Safe in the Kitchen

When Zach and I were first married, one of the first arguments we had was over a gallon of milk. He had gotten it out for one reason or another (probably cereal) and never put it back. I didn’t notice until the  next day, so that milk sat out all night. We didn’t have much money, so I was pretty miffed about the idea of having to buy another gallon of milk. His response, though, was to put it back in the fridge to use later because, “Mom always did that and nothing bad ever happened.” Whether or not that was true, I don’t know. Our parents’ generation in the region we live in isn’t too picky about food safety, so it wouldn’t have surprised me if my own mother had done it. (Washing your hands before you cook? Why would you do that? I’ve eaten a lot of questionable things in my lifetime.) But it’s actually extremely important! Crystal is here to explain why it’s so important and what you can do to keep your family safe from food-borne bacteria that could make them sick. Today she’s going to talk about something extremely important: how to make food safe (meaning, how to keep it from poisoning you!) by properly preparing, cooking, and storing. (As for the milk, I crept back into the kitchen after he went to work, dumped it out, and threw the empty container away. 😛 ) 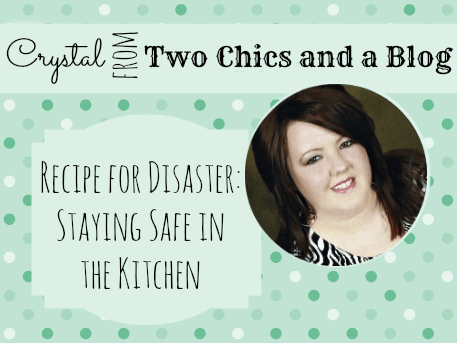 For several years I was a Family & Consumer Sciences teacher (Home Ec.) and food and kitchen safety was something that I really spent a lot of time discussing with my students. If you have ever experienced an episode of food poisoning or were injured in the kitchen you will understand how important food and kitchen safety is. Several years ago I attended a chili supper at my church and later that night I became extremely ill because of tainted meat. It turned out that several people in the church that had ate that specific chili got very sick. I can say that was probably the sickest I have ever been and I don’t EVER want to experience that again! That’s why I am so attentive to what goes on in my kitchen as well as what foods I eat when I go to pot-luck dinners and picnics.

Did you know that, according to FoodSafety.gov food poisoning sends more than 100,000 people to the hospital each year? That’s 1 in 6 people!

So let’s take a look first at food safety. There are 4 simple steps to keep you and your family safe from food
poisoning.

Wash your hands and kitchen surfaces often. Illness causing bacteria can live on surfaces all over your kitchen: your hands, counters, utensils, cutting boards, and dishes.
* Wash your hands with hot water and soap for at least 20 seconds. I always told my students to sing the alphabet song while they washed their hands. This ensured that they were washing their hands long enough and not just a quick dash under the water!
* Wash surfaces and utensils after each use. If you have a dishwasher I recommend using it especially to clean utensils and surfaces such as cutting boards. The high temperature will help to kill bacteria.
* Wash fruits and veggies even if you plan on peeling them. Bacteria spreads to the inside as you cut and peel. I always wash before and after peeling or cutting, just to be safe.

Don’t cross-contaminate.
* Use separate cutting boards and plates for produce and for meat, poultry, seafood, and eggs. I have one cutting board that I use solely for fruits and veggies and another cutting board that I use for raw meats. It’s also a good idea to avoid cutting raw meat on a wood cutting board. The bacteria from the meat can get into the cuts and cracks of the wood and is difficult to clean. I avoid using wood cutting boards at all in my kitchen. Also when grilling I take two plates out to the grill, one with the raw meat on it and a clean one that I will place the cooked meat on when it comes off of the grill.
* Keep meat, poultry, seafood, and eggs separate from all other foods at the grocery. I like to divide my grocery cart into zones. Produce goes in one zone and raw meat goes in another to avoid cross-contamination.
* Keep raw meat, poultry, and seafood separate from other foods in the refrigerator. How many times have you had to clean up a bloody mess in your fridge because a package of meat was leaking? When you bring meat home from the grocery place it in ziploc bags or in a dish that will catch the juices if it does leak.

Cook foods to the right temperature. Bacteria that can cause food poisoning spreads the quickest in what is known as the “Danger Zone”. This is when food is between 40 degrees and 140 degrees Fahrenheit.
* Use a food thermometer to check to see if your food is cooked to the proper temperature.
* Keep hot foods hot after cooking. You can keep foods hot by using a warming tray, chafing dish, or slow cooker.
* Microwave foods thoroughly (to 165 degrees).

Refrigerate promptly after cooking. When perishable food is in the Danger Zone, illness causing bacteria can grow within 2 hours, and if the food is outside, like at a picnic, and the temperature is 90 degrees or higher, you can cut that time down to 1 hour. How many times have you been to a picnic or holiday gathering and the food is left sitting out for hours?
* Refrigerate perishable foods within two hours. This is especially important with foods that have a mayonnaise base such as cole slaw and potato salad. I love both of those foods but I am hesitant to eat them at picnics because I know that they are often sources of bacteria if the food has been in the danger zone for too long.
* Never thaw or marinate foods on the counter. Instead you should choose to thaw foods in the refrigerator, in cold water (be sure to change the water every 30 minutes), or in the microwave.

Crystal is one-half of the blogging team at Two Chics and a Blog. She is a former teacher with a background in nutrition and culinary arts. Crystal lives in Kentucky with her husband and two dogs, Max and Jack.

Guest Post: What is a roux and how do you make one?