Yesterday I posted about the Guitar Shelf I made Zach for Christmas. Today I’m going to tell you what I wish I had done differently…in case you decide to make something similar.

The only way I could see you needing primer is if you’re going to paint your guitar all one color instead of using multiple colors like we did. In that case, I would use it to be safe, because your wood shelves and your guitar will probably be made from different woods and the paint might look a little different on them (that was a problem I noticed at first with the inside of the guitar, but after we sprayed it with the polyurethane and I added more coats, that seemed to help). The primer will make it look more uniform. That’s also helpful with the neck, since it’s difficult to sand…which is why we didn’t sand it.

I hope that helps. If you have any questions, feel free to ask! =) 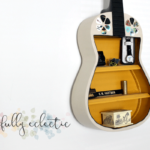 How to Make a Guitar Shelf

A year for change