I love cooking and making things from scratch. Finding ways to make an everyday household item instead of going to the store and buying it is really satisfying (because screw going to the grocery store–I hate that place). But somehow it never occurred to me to make my own almond milk. Until some friends from college came to visit me on Sunday.

I was telling Jenn and Brittni–who switched to a healthier lifestyle a few months ago and have been very successful at it–that I wanted to drink more almond milk because cow milk is just so high in calories and sugar (especially if you want low-fat). You just can’t win with cow milk. But almond milk is so expensive! I also wanted to try almond flour in place of regular flour. (My husband has convinced me that experimenting with the paleo diet might be kind of interesting.)

And then Brittni told me something that Blew. My. Mind.

She makes her own almond milk.

Oh. It gets better.

So she promised that when she got home, she would send me the instructions for her almond milk. And she did. Yay! She also gave me permission to share it with you. So yay for you, too! 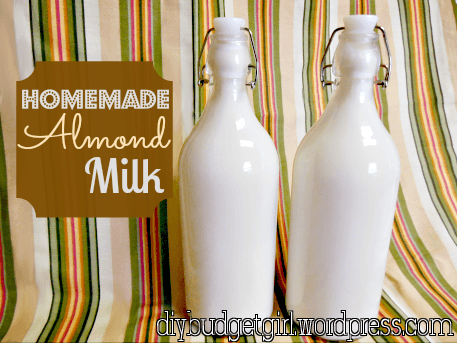 Step 01: Soak one cup of almonds (by volume, not by weight) in water for at least eight hours. I did this before I went to bed. You don’t need a lot of water, just enough to completely cover the almonds. This will make them soft and puffy so they will be easier to blend.

You start with this:

And a few hours later you have this:

Step 02: Drain the almonds and then put them in a food processor or a blender with 5 cups (or 1 1/2 liters) of water. Blend until the almonds are very fine, or about 3-4 minutes.

My blender started leaking out of the top, so I wrapped a couple paper towels around it. That seemed to work pretty perfectly. 🙂

Step 03:  Put a strainer over a bowl and put some cheesecloth into it (if you’re like me and you hate cheesecloth, see my post called Alternatives to Cheesecloth). I prefer to use a reusable coffee filter because it’s easier to wash and it gets all of the meal.

See all that meal? I use a spoon to stir that while it strains (which isn’t nearly as bad as it sounds). Once it’s done, I take the meal out, wrap it up in something (a towel, cheesecloth, whatever), and squeeze the remaining liquid out of it. Be sure to do that over the filter, though, in case some of the meal would happen to pop out (I hate having meal in my milk). Dump the meal into a bowl and set aside.

Step 04: (This is completely optional, but I recommend it if you want to get your money’s worth.) Once you’ve finished straining that batch, put the almond meal back into the blender and add 5 more cups of water. Blend for about 30 seconds to a minute and repeat the above steps.

I strained the milk into the same bowl, because the second batch of milk might not be as strong as the first. This way, it all mixes together and has a nice almond flavor that isn’t too strong because the second, weaker batch waters it down a little.

Get out your funnel and whatever jar or bottle you plan to store this in and funnel the liquid into it. I used the Slom bottle from Ikea. They hold 34 ounces each. So if you go with these, you might at least want two of them.

It’s not going to be the same consistency as store bought…this is actually more of the consistency of cow milk! Which I really enjoy. The reason the store bought almond milk (and coconut milk, for that matter) is so thick is because they add xanthan gum (a thickening agent) to it.

FYI, if you use the cinnamon or the chocolate, it’s best to blend those into the milk using a food processor or blender. Otherwise, it will be clumpy.

If you have more flavoring ideas, leave them in the comments! If you want me to post them and credit you, I’ll be more than happy to!

As for that bowl of almond meal, this post got way too long. So I made a separate post explaining the almond meal. You can read it here.

As for the cost:

We got a 3 pound (9 cup) bag at Sam’s Club for $10.49. Which would make this $2.24 a gallon to make (keep in mind that what the grocery store sells generally comes in a half gallon container). Plus you also get almond flour out of it, if you choose to keep the meal. You can get much better deals online if you have the room to store all the almonds (we do not). The only problem with homemade is that it’s not enriched with the calcium and iron that store bought is.