I made the best homemade shaving cream a few weeks ago. It smells good and makes my legs feel so silky. However, it looks like a tub of fat…as my sister pointed out when she came over. (“Chelsey…why are you keeping a container of fat in your bathtub?” BECAUSE SOMETIMES I GET HUNGRY WHEN I SHOWER, JEEZ!) 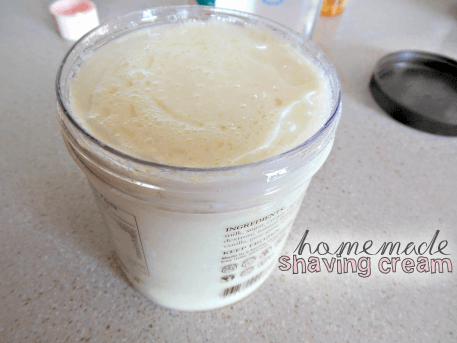 It was pretty easy to make and I used “ingredients” that I already had lying around.

Step 01: Dump all the ingredients into your container. Yep.

The conditioner is obviously what causes this concoction to look like lard.

I love how much it looks like a lava lamp.

Step 02: You may be tempted to stir this…but it doesn’t work that well. Stirring doesn’t mix it enough and, as you can see, my shaving cream is near the top of the container. Stirring it made kind of a mess. So the easiest way to mix everything together is to just put the lid on and shake it.

I love this! It smells good and feels good. I should have put it in a squeeze bottle, so it would be easier to put on. But this works, too. It’s especially nice after I use my lemon scrub. (You get a closer shave if you exfoliate the dead skill cells surrounding your follicles first. Just try not to over shave after you do this, because shaving also exfoliates and you could damage your skin.)

Updated November 8, 2013: Now that I’ve been using this a while, I can really review it. I accidentally knocked it over while I was using it and spilled half of it. That said, it has lasted me seven months. If I hadn’t spilled it, I believe I could have gotten a year’s worth of shaves out of it. After I ran out, I switched back to store bought for a while, just as an experiment. Here are some things I noticed:

Tip for getting your shaving cream to last longer: In the unedited post, I mentioned that I wished I had put this in a squeeze bottle. I no longer feel that way, because putting it in a squeeze bottle means I wind up using more of it than necessary. Instead, I leave it in the container pictured above (which works nicely anyway, because it separates and leaving it in the container makes it easy to just shake and mix again). I dip my razor in it, as needed (rinse it off well before re-dipping). Which means I only use what I need. Shaving cream isn’t necessary, it’s just a lubricant. It keeps you from cutting yourself too often (by helping the razor glide more easily) and it helps prevent your skin from drying out. So caking it on (like I tend to do when I use a bottle) is too much. Dipping it gives me the perfect amount.

I stand by what I said seven months ago. This is the best shaving cream I have ever used. If I can help it, I would like to never use store bought again.

Tips for Selling Your Home

Awesome cream, Chelsey. I also prefer natural creams and add either aloe vera or tea tree oil in it.

Thanks! I ordered a bunch of ingredients to attempt to make a more natural version of this cream. Hopefully it turns out as well as this did! 🙂