I finally had enough with digging through my make-up. I had pouches, bags, boxes. Some of it wasn’t even usable anymore, being either broken, dried out, or just really, really old (it’s been a long time since I’ve purged my make-up bags, guys…I mean years. I won’t tell you how many). So I went through, chucked out a bunch of stuff, and kept the stuff that I use at least once week. But still…digging through was a pain. Especially since I don’t have a special place to put it. Usually, it winds up under the bed. So I decided to take a leaf from Pinterest’s book and make a magnetized make-up organizer.

Most of the supplies were found at The Dollar Tree. The rest I already had. Score! In the end, this cost me about $12 to make. Because I had to buy neodymium magnets (I got 100 for $7 on Amazon! They’ve gone up a little, but they’re here). 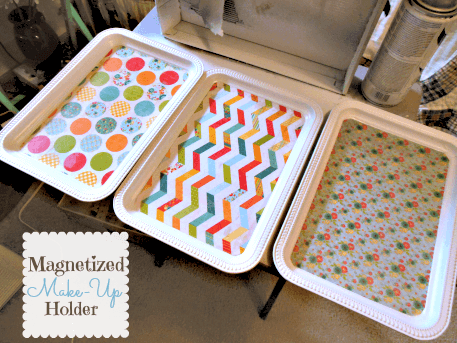 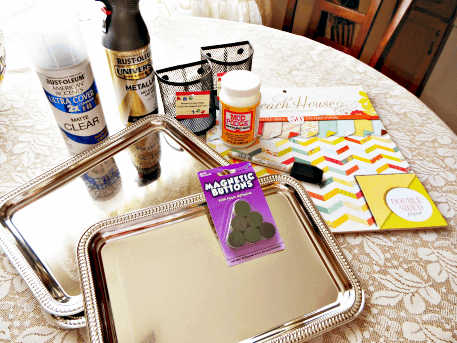 The cheap magnet buttons (found in Wal-Mart’s craft aisle) work if you’re going to be tilting your boards back a little. But I hung mine on the wall…and my make-up immediately fell right off. If you’re going to hang them straight up, you’ll want to get neodymium magnets. You might also notice that I have oil-rubbed bronze spray paint in the background. Originally, that’s what I was going to paint my trays…but then I decided I wanted something lighter for the bathroom. So I switched to plain white paint. FYI, I recommend shopantibioticsonline Valspar (which I got at Lowe’s). It has the best coverage, it dries faster, it sprays evenly. I’ve never had a problem with it dripping (wish I could say the same for Krylon). It’s my favorite spray paint and it’s not much more expensive than Krylon or Rustoleum.

Step 01: Lay your tray on the scrapbook paper you’ve picked out and trace around it. 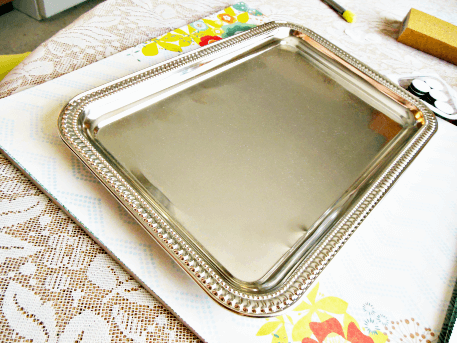 The trace doesn’t have to be perfect if you have a straight paper trimmer, so don’t worry if you screw up. Mostly, you need to know how long and how wide to cut.

Step 02: Cut! The rounded edges made this part more difficult. Some of my edges turned out smaller than they should have, but you can’t really tell once it’s on the wall and covered in make-up. Do your best. 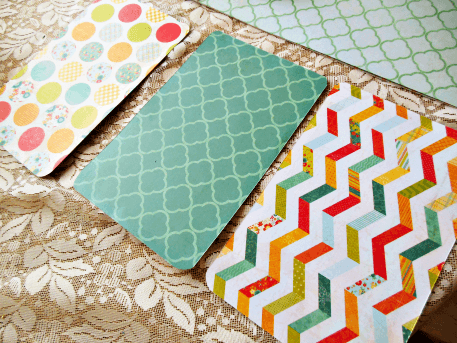 I changed my mind about the middle piece. You’ll see what it looks like in a moment.

Step 03: Spray your trays with white spray paint and let them dry. I let each side dry for about 24 hours. 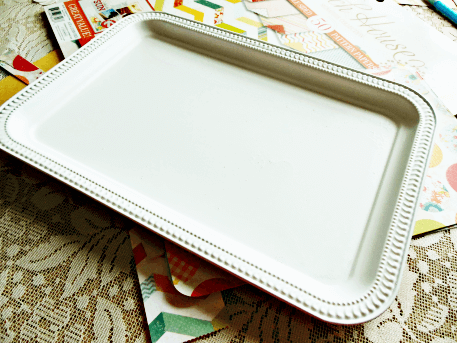 Step 04: Coat the bottom of the paper in mod podge and stick it to the tray. Do not coat the tray and stick the paper to it. Why? 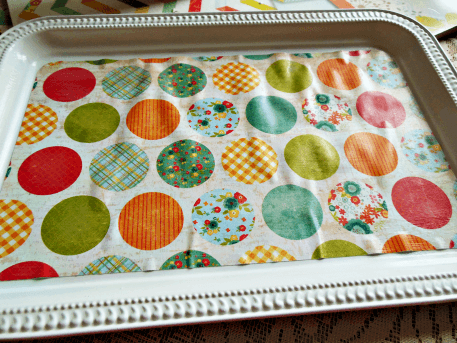 Because this happens. I was able to mostly fix it by flattening it with my hand over and over again. But it was a pain. And there were still a couple spots that didn’t turn out great. The other two trays came out perfectly. As I said, the secret is putting the mod podge on the paper and then running my hands over it (especially the edges) until it dried and not putting the mod podge directly on the tray. It is messier, but c’est la vie.

Here is what I chose to replace the original blue paper: 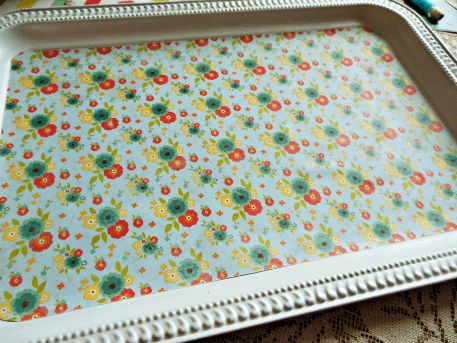 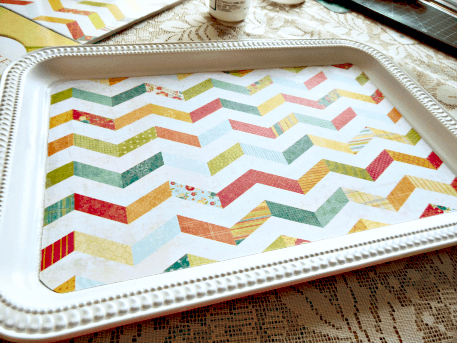 Step 05: Once the paper has completely dried, coat the entire tray in mod podge, paying particular attention to the edges of the paper. Wait for that to dry and then spray it with a matte sealer (this is optional and only really necessary if you’re worried about it getting wet…I was, because I put mine right beside the bathroom sink). 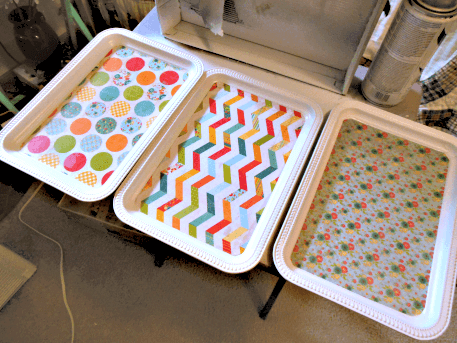 Step 06: You can actually do this when you spray the trays, but I’m going to treat it as a separate step. Spray your locker pencil holders. I painted mine white to match the trays. 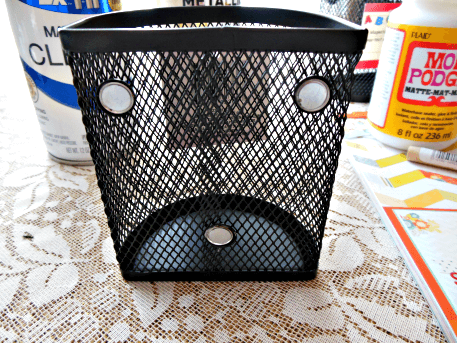 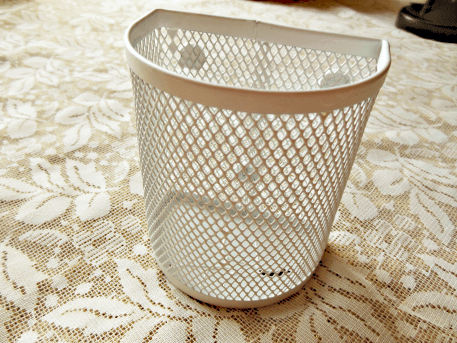 By the way, I got these ones because they already had magnets attached. If you don’t like them, you can just get others and attach the magnets yourself. Amazon also has a nice selection of pencil holders (these are not included). If I had had the extra money, these ones would have been my first choice. They’re pricey, but Amazon says they come in a pack of 12, which is nice if you need/want more trays.

Step 07: Take your neodymium magnets and hot glue them onto the back of your make-up. Wait for it to completely cool. I gave it an hour, just to be sure. Just because they look like they’ve set doesn’t mean they have. When I put them up immediately after the surface cooled, the magnets fell right out. So be sure to give it some extra time.

With larger pieces, I put used two magnets. You could also try spraying the backs with magnetic spray paint. I’ve never used it, though, so I don’t know if it works. The nice thing about hot gluing the magnets, though, is that once you throw that piece of make-up away, you can remove the magnet (if somewhat forcefully) and reuse it. 🙂

Now to find a way to attach the trays to the wall. This is the part that gave me the most trouble. My trays sat around for weeks until I could figure out how to successfully attach them to the wall. In the end, I did it by drilling holes into each corner using a 20V hand drill and a 1/16 inch (1.58 mm) drill bit. I sanded the edges of the drill holes so they wouldn’t cut anyone. Afterwards, I simply nailed them to the wall, put my pencil holders on them, and loaded them with my make-up supplies! 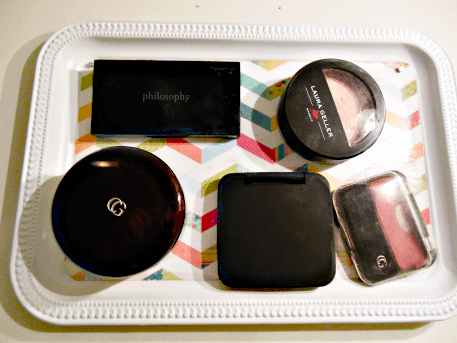 Just be sure to leave some space between the tray and the nail, just in case you ever need to take it down. 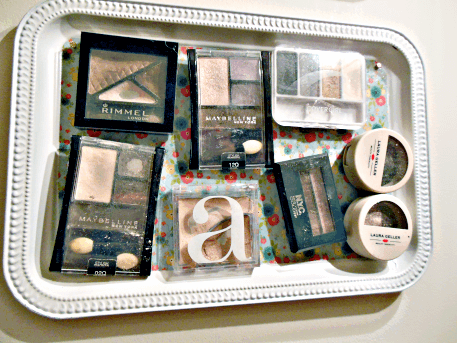 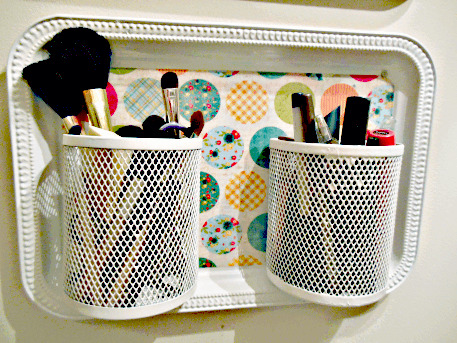 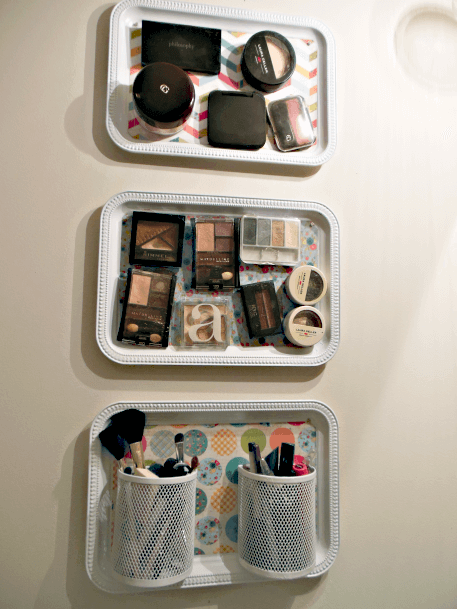 This definitely works for me. 😀 The only thing I can’t figure out is how to add my lipstick to it. So that’s still in a bag for now. 😛

Is there a special way you like to organize your make-up?

Updated 10/17/13: I’ve had these in my bathroom for nearly two months now and I can’t tell you how much easier they’ve made my life. My apartment no longer has make-up scattered all over the place. It’s really nice to have a specific spot to do my make-up. I’m sure most of you do it in the bathroom, but I used to just do it wherever (living room, bedroom, office, etc.), since I didn’t have anywhere to keep the make-up. And then putting my make-up away was something I used to be incredibly lazy about, meaning it would sit on the coffee table or on my desk until I felt compelled to clean. Also, since I put these right beside the bathroom sink and mirror, there is no excuse for my make-up not to end up right back where it belongs. So I definitely recommend this, especially if you find your make-up counter (or your daughter’s make-up counter) constantly cluttered.

Updated 10/24/13: Something I forgot to mention in my last update is one problem I’ve been having with my make-up. The neodymium magnets are incredibly strong, so sometimes when I pull my make-up down, the magnet doesn’t want to budge and it causes the hot glue to separate from the make-up. This happens very frequently with my blush and certain eye shadows. I intend to explore more options with magnetizing the make-up. So far my ideas have been:

How to Edit Lighting

Sweet! Absolutely love this DIY. I have the paint at home already, must try the pencil holder and tray for the mess of my lip liners and what not. Thank you for sharing this.

Thanks, I already did the tray..need to get a magnetized pencil holder..or glue magnets to the one I have. You have me excited. 🙂

lol In case I didn’t say so in the post, I got the pencil holders at The Dollar Tree in the school supplies section. 🙂

Hey! Very Intelligent idea! I love your DIY makeup organization! Thank you for sharing this. BTW, I found you via A Lovely Blog Hop @ Her and Nicole Blog. I follow your bloglovin’ 🙂

Thank you! Your blog is gorgeous, by the way. Following you now. 😀

wow I love it