I finally got containers for the kitchen! Which means the flours and sugars I’ve had sitting on the counter are no longer there. I love not having that counter clutter! It’s made cooking and cleaning such a breeze! The containers have actually been here for a couple of weeks now, but I just got to labeling them. So now I have pictures for you!

The labels were the hard part, because I didn’t know what I wanted to do. I didn’t want to make labels like my spice labels because I may change what’s being kept in some of these. After some deliberation, I decided to go with chalkboard paint. I found this tutorial on how to make your own chalkboard paint, but I couldn’t find any tile grout at Wal-Mart and did not feel like running all the way across town to Lowe’s. So I just bought a can of chalkboard spray paint. Boring, but it was still only $3.89 (compared to $10.00 for the regular stuff you put on with a paint brush…what?).

Ideally, I wanted to this. But since the wine glasses are on the top shelf, I don’t have room for my containers to sit upright, so they lay flat on top of each other. Eventually, I want to get a wine glass rack to install under my cabinets and then my containers can sit upright. When that happens, I’ll redo this. But for now, only the lids are getting painted. (But aren’t those adorable?)

So anyway, to keep from inhaling too many fumes, I went outside.

Step 01: I laid down a cheap vinyl tablecloth I got at Family Dollar a while ago specifically for projects like this.

Step 02: I laid my container lids down on top and sprayed them.

If you happen to make this mistake, fix it immediately. I recommend taking the paint off. I suppose you could also cake more paint on there, but you should really just take the paint off. Do that by filling your sink (or a bucket, if you’d prefer not to get paint in your sink) with water, put in about 1/4 cup of Pine Sol (or more…I got frustrated and just dumped it in there straight from the bottle) and let the lids soak for an hour or so. Then put some Dawn dish soap on them and scrub.

But hopefully you were smarter than I was and just shook the freaking can.

Step 03: Let the lids dry and repeat the spraying process until they are completely coated. For me, it was about three coats of paint (I had trouble with the sides).

The back of the can says to wait about 24 hours before you actually use your chalkboard paint, which means don’t write on them. So some of mine are done and some aren’t. But they’re all on the containers and looking quite sleek. In the end, I don’t really like spray paint. It’s faster, yes, but I felt like I didn’t have so much control over where it was going. And it smells horrible. For my first time using spray paint, though (living in dorms and apartments all of my adult life generally discouraged me from doing so) it was a relative success. I don’t look forward to doing it again, though.

Anyway, hopefully the cabinet won’t look like this much longer. I’d really like for the containers to sit upright.

Oh! And the containers were $2.50 each. I bought eight, so that’s $20.00. The spray paint was $3.89 and the chalk was less than $2.00 (can’t remember the exact price. So that brings us to about $25. Not so bad. Definitely under budget. After spending about a month or two looking, though, I don’t think I could have done it much cheaper.

Also, I called the landlady about the leak under the kitchen sink. Hurricane Sandy has put our maintenance guy temporarily out of commission, so it will have to wait (understandably). I have a bucket there for now, so I’m not too concerned about it. I’ve been looking into it and I can’t seem to find the source. But this morning, a new puddle had appeared. I’m starting to suspect the dishwasher. Possibly. 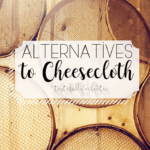 These are super cute. I actually like the idea of keeping the containers on their sides – it’s different!