Painting antique furniture is something I’ve been dying to do since starting this blog. But I didn’t have room in our old place and I didn’t have any idea of how I wanted to do it. Now that we’ve moved, though, I’m noticing an increase in the number of household projects I need to get done. For instance, my cedar chest.

A long time ago, my grandmother obtained an old 1950’s Cavalier cedar chest. And, for some reason, painted it a green-ish color.

Thirteen years ago, when my grandfather died and she found herself living on her own, she gave me the chest. For a while, it sat in my mom’s basement. And then when Zach and I got married, I took it with me.

Over the last four years, we’ve put it through all kinds of stuff. Zach’s laid tools and bed pieces on it (creating huge gashes in the top). I’ve done “quick” projects on it and wound up spilling paint all over it. For a few years, it was being used as a bench in our bedroom, so the gashes and stains and such didn’t matter.

Now it’s in the center of our living room, being used as a coffee table. So I wanted it to look nice. And now it does!

Note: This post contains affiliate links, meaning if you purchase anything through one of my links, I’ll make a small commission. Read more about my affiliations on my Disclosure Statement. 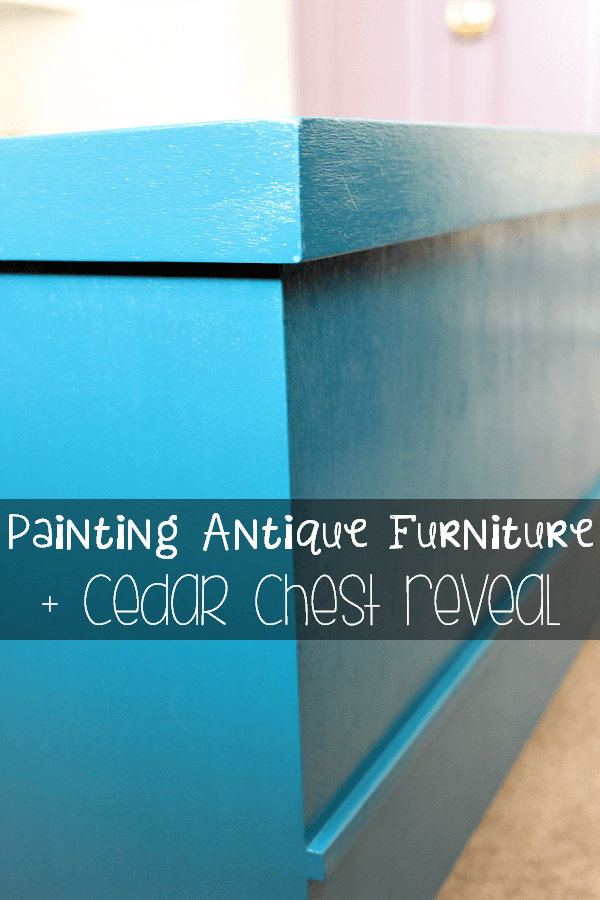 If you have a Cavalier cedar chest or a Lane Company cedar chest, DISABLE THE LOCK. Many people say you should call a locksmith, but it’s really easy to disable them yourself.

Both companies created twist locks and push locks that were used up until the 1980’s. Meaning the lock is meant to look like it takes a key, but it doesn’t. All you do is push or twist the lock to get it open. Except the locks fail…especially when they’re nearly 70 years old.

With the twist locks, they get stuck (Mom and I forced my lock open years ago when all of my bedlinens got stuck inside. We then immediately disabled it). With the push locks, the chest will lock as soon as it closes…and doesn’t open from the inside. So children have climbed into these chests, gotten locked in, and suffocated to death.

If you have a Lane Company chest, they’ll replace the lock for you free of charge (even if you don’t have the warranty). Cavalier won’t because the company doesn’t exist anymore. You can disable the lock yourself by opening the chest and removing the part that’s attached to the lid using a small screw driver (like the ones you use to fix a pair of glasses). The chest will still retain its appearance, but the inside part of the lock won’t work anymore.

If you want to know exactly how to do this, let me know and I’ll write up a quick tutorial. It’s really not hard and it’s something you absolutely need to do if you have children.

About updating the chest:

First, if you happen to have a piece of old Cavalier furniture that happens to be painted: paint stripper will not work on it. It will get some of the paint, but leave behind all this weird, gooey yellow stuff. That’s because Cavalier furniture is made with real wood, but for some reason it has veneer glued to it. This isn’t something I knew when I started, so I tried stripping the paint. Nope! I wound up buying two cans of stripper before breaking down and getting a rotating orbit sander. So this project wound up costing more than I’d planned.

Now…if you have a piece of Cavalier furniture, you may not want to sand it, either. Cavalier isn’t extremely valuable (depending on the piece, they usually go for $150-$500. Weird, considering the company stopped existing about 50 years ago and made what many people call the “Cadillac” of cedar chests). However, it’s more valuable, and likely to remain valuable, if it’s restored to its original condition, rather than updated.

But I chose to update mine. Not that I would have been able to restore it, anyway, with the paint my grandmother slapped on there. 😛

Updating it meant sanding off everything, so only the actual wood was left. It took me a while.

My “before” pictures aren’t great, since I got impatient and used the flash. So bear with me. 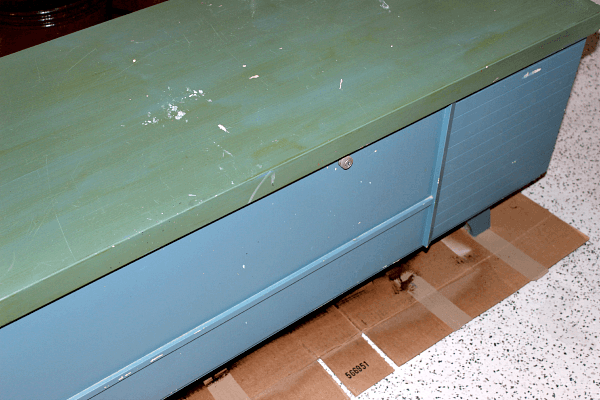 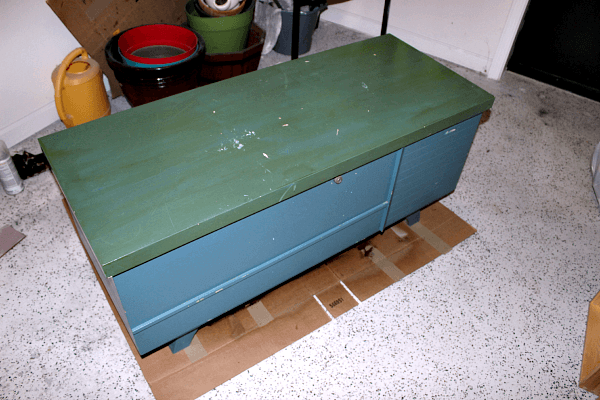 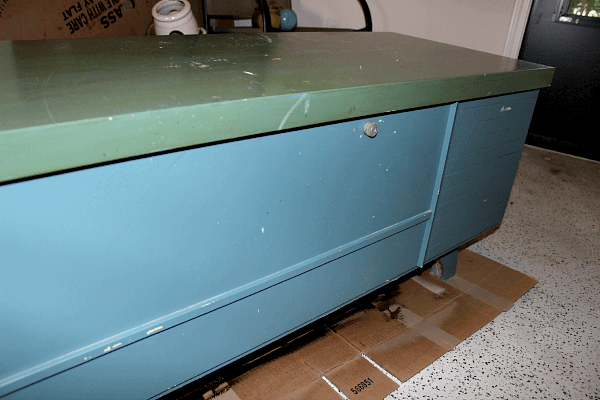 The top and bottom are actually the same color. But I think what happened was that Grandma decided the bottom didn’t need protection. So she used polyurethane to protect the top and put nothing on bottom. Polyurethane has a tendency to turn paint yellow and what happens is what you see above.

Plus it’s had the hell beaten out of it over the last 60+ years.

And now for the paint removal!

First, I took the lock off. I left everything else on, because I didn’t want to paint the back since it faces the fireplace, anyway. (As of this moment, I’m undecided on whether or not I’ll paint it later.) 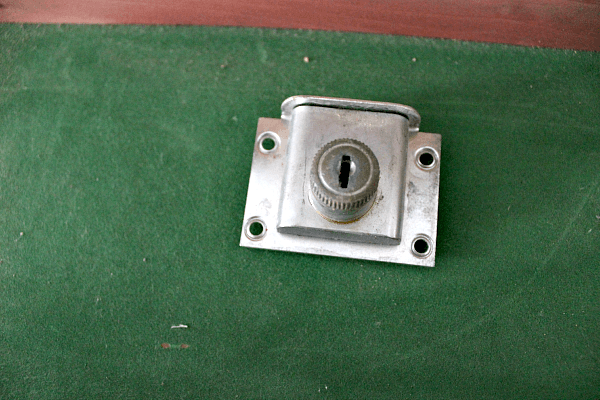 And then I got to sanding! 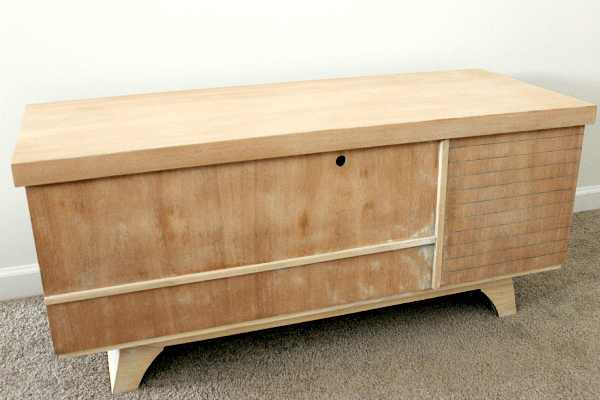 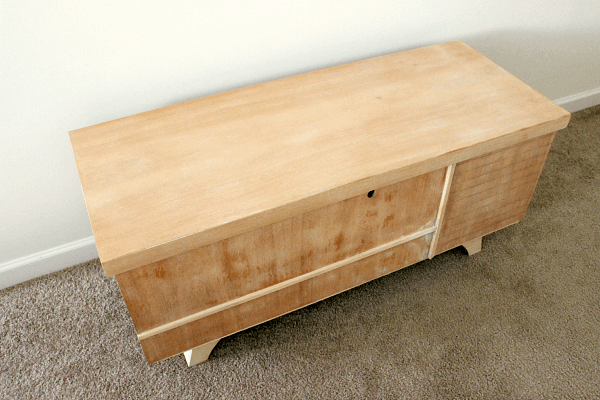 I actually loved the look of the natural wood, but I had a  lot of trouble sanding inside crevices . Not only is there that awkward corner (which a Genesis tool would have done nicely, if I’d had one), but that horizontal paneling was impossible to get the old paint out of without a Dremel. This would look gorgeous with a light stain, but I decided to continue on with the paint so I could cover those areas more easily.

To paint the chest, I used the tutorial Painted Furniture Ideas posted about How to Paint Furniture Without Showing Brush Strokes. Mainly it just requires a lot of patience. But I was successful! No brush strokes at all, which is a first for me. You might see areas that look like they have brush strokes, but it’s just the wood grain showing through. 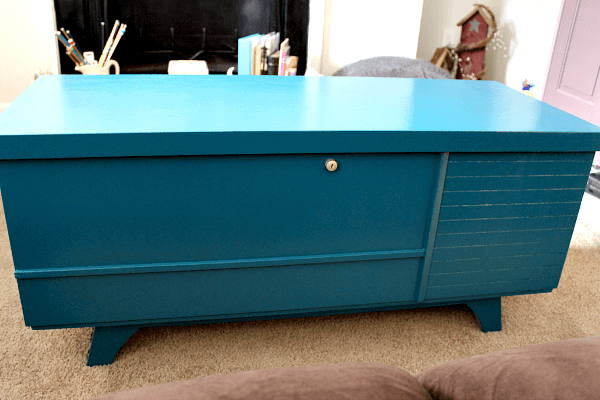 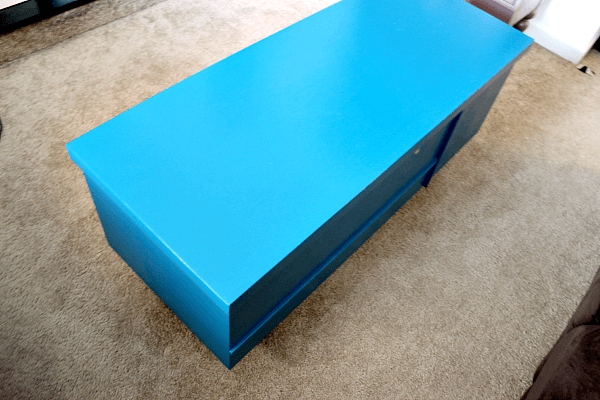 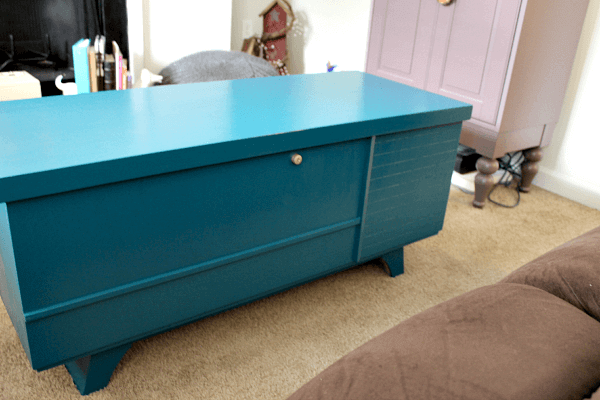 For the paint, I used Behr’s Tropical Sunset, which I found at Home Depot. I brought home about 100 paint chips one day and as soon as I laid that color down on the cedar chest, Zach and I both said, “Yep! That’s the one!” Picking a paint color is usually so difficult, but this one just seemed like the obvious choice for us. 😛

I also sprayed the lock with Satin Nickel from Rustoleum. 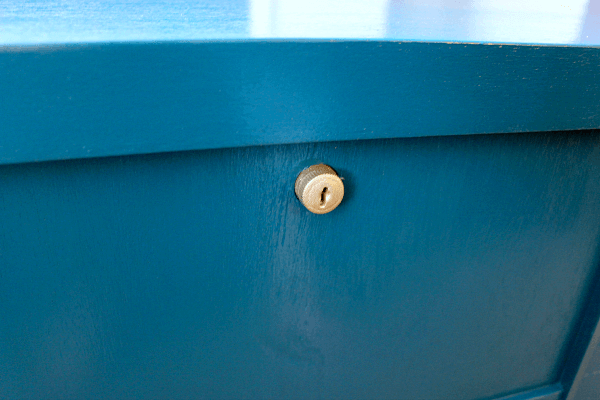 It’s hard to tell in the picture, but the lock looks so much better.

I let the paint cure for a month and then I went over it with the polycrylic, as per the instructions from All Things Thrifty on How to Seal Your Furniture. I only put one coat on the bottom, since it’s not going to see much wear and tear. I put four coats on the top. I let each coat dry for 2 hours before lightly sanding and applying the next coat. Then I let the whole thing sit for 48 hours before even touching it. Because I know that moving it into my living room means people will set things on it, whether it’s dry or not. 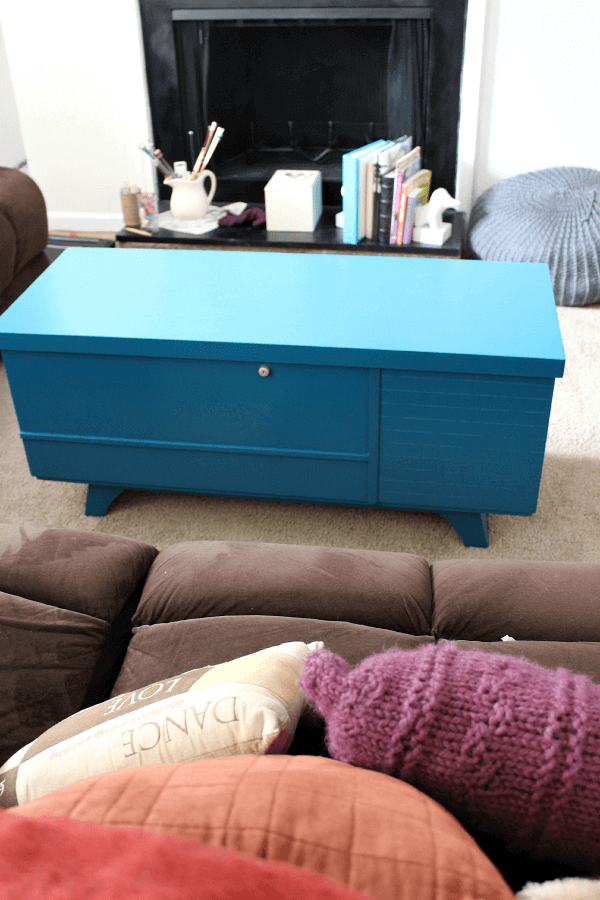 Once the sanding was over, this was an incredibly easy project! The only issue I had was when the paint was still curing, I had this sitting in a corner of my living room on some cardboard (so I could keep it out of the humidity). My BIL came over and immediately set his wet soda can down on the paint…you know, for about a milisecond before I screamed, “GET THAT SHIT OFF MY FURNITURE!” Which was effective in keeping both him and my FIL from even looking at it wrong during their visit. 😛 Needless to say, we’ll be using coasters on this.

I’m REALLY happy with the end results, though! What do you guys think? Let me know in the comments!

This is beautiful, Chelsey! Thanks so much for sharing it at Coffee and Conversations!

Help!! My cavalier chest is locked shut! How can I get it to open?!!

My Cavalier chest didn’t have a key, the lock turned and that was how it locked and unlocked. It got stuck at one point and I managed to force it open. After that, I removed the lock from the inside so it couldn’t get stuck shut again.
Sorry, that’s the best I can do without seeing your chest.