And we don’t even have an air popper.

He just uses a plain old-fashioned stock pot to make it. And I can’t in good conscience keep this secret any longer. Because you have to have this popcorn.

Step 01: Coat the bottom of your stock pot with oil. Put your kernels in the pot and swirl it around until they have all been somewhat coated with oil (this doesn’t have to be perfect and they don’t have to be completely coated).

Step 02: Place your lid on your stock pot, at an angle so steam can escape.

Step 03: Turn your burner up to medium heat (on our stove, that would be 5). Heat your pot after you’ve put everything in it. After about three minutes, you’ll hear kernels start popping. Give it another minute–they’ll pop more violently and then the sound will start to die down. When it does, remove the pot from the burner. Don’t wait for it to die down completely, because you’ll start to burn.

And don’t worry about unpopped kernels–they’ll keep popping for a few more seconds after you’ve removed it from the burner. Which is also why you should wait to remove the lid until you can no longer hear popping.

(FYI, it took me 9 minutes from the time I turned my burner on to the time my popcorn was done.)

Step 04: Put your popcorn in a bowl, sprinkle with your seasoning of choice, and enjoy!

This is one of my favorite snacks. And fun fact: popcorn is actually a superfood. It’s filled with fiber, so it keeps you fuller longer. It’s relatively low in calories (this particular recipe is 100 calories, without seasoning and salt–that’s for the whole bowl! Also, what you see pictured above was not the whole bowl…that was about half of what it made. I had a metal bowl off camera containing the rest of the popcorn). As I said, the popcorn doesn’t come out oily. In face, a lot of the oil stays coated on the inside of the pot.

What I love most about this particular recipe is that we don’t have to have an air popper to do it. I imagine air poppers are great, but if it’s the only way you know how to make your own popcorn, then you’re limiting yourself. Having movie night at a friend’s house, but they don’t have an air popper? I bet they have a stock pot. Learn how to use that, too. It comes in handy.

Honestly, though, popping our own popcorn has turned me into a popcorn snob. I can no longer stand to eat that nasty, greasy, bagged crap. We bought some last summer while my sister was here and I attempted to get through a bag of it…and just couldn’t do it. No. Plus bags leave so many kernels. This leaves very few.  You’ll get some every now and then, but the bowl I made for this entry had maybe eight kernels that didn’t pop. Very few.

The point is that making your own popcorn on the stove is worth it. Try it! 😀

ETA: As Zach pointed out in the comments, you need a flat-bottomed stock pot. We have one that, for whatever reason, bulges in the center and it makes terrible popcorn. So if you have a flat-bottomed, heavy stock pot then that one is going to be your best bet at getting evenly cooked popcorn. 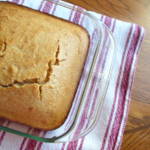 Note also that your stockpot should be the kind that has a nice, thick, flat bottom. This helps to cook the popcorn evenly. We have another stockpot that is thin and should be heated over flame, and it SUCKS for popcorn.

I forgot about that! That other stock pot does suck for popcorn. And pretty much everything else. What a waste.