Inspired by Harry Potter, this pumpkin juice is wonderful chilled and tastes like fall.

Today is inspired by Harry Potter…because I’m too obsessed for my own good.

Every summer, I reread the Harry Potter series and every summer I catch something I didn’t notice before. One thing never changes, though–Rowling somehow makes pumpkin juice sound like both the most refreshing and the most comforting drink in the universe.

Ever since The Wizarding World of Harry Potter opened in Orlando, I’ve been dying to go and try all of the food and drinks mentioned in the book. In the meantime, I thought I’d try my own recipe.

This post was featured on Anyonita Nibbles and In the Playroom.

First, I started by doing a little research. Do I actually juice a pumpkin? Do I add spices? Boil it like cider? I needed to know. So, naturally, I looked up pumpkin juice in The Wizarding World of Harry Potter’s shop. I actually did this because I wanted to see how much it would cost to have some mailed to me. Maybe I could taste it and then figure out the recipe on my own? That shouldn’t be too hard to do with a beverage.

I decided not to buy it, though. For one thing, $30 is way too much for a 4-pack of pumpkin juice (though the bottles are adorable). Also, when I read the description, I realized they have a list of ingredients. Woo! So I went off of that.

What are the ingredients? Let me explain!

Ingredients are always listed in order of how much was put in the recipe (so most juices would have “water” as the main ingredient). The ingredients for pumpkin juice are: water, apple juice concentrate, pumpkin puree, apricot puree, sugar, natural and artificial flavors, citric acid, acesulfame potassium, and sodium benzoate.

A lot of that is self-explanatory…but then we get to citric acid. Citric acid is a preservative found in citrus fruits (lemons, oranges, etc.). Acesulfame potassium is a sweetener (mixed with the sugar that’s also listed, I’m going to go out on a limb and say these drinks are VERY sweet). You might recognize this sweetener by its more common names–Sunette or Sweet One. Finally, sodium benzoate is a preservative. To simplify, it’s a type of salt.

Knowing all of that told me what I needed, which also allowed me to make a few changes. Here’s what I wound up with. 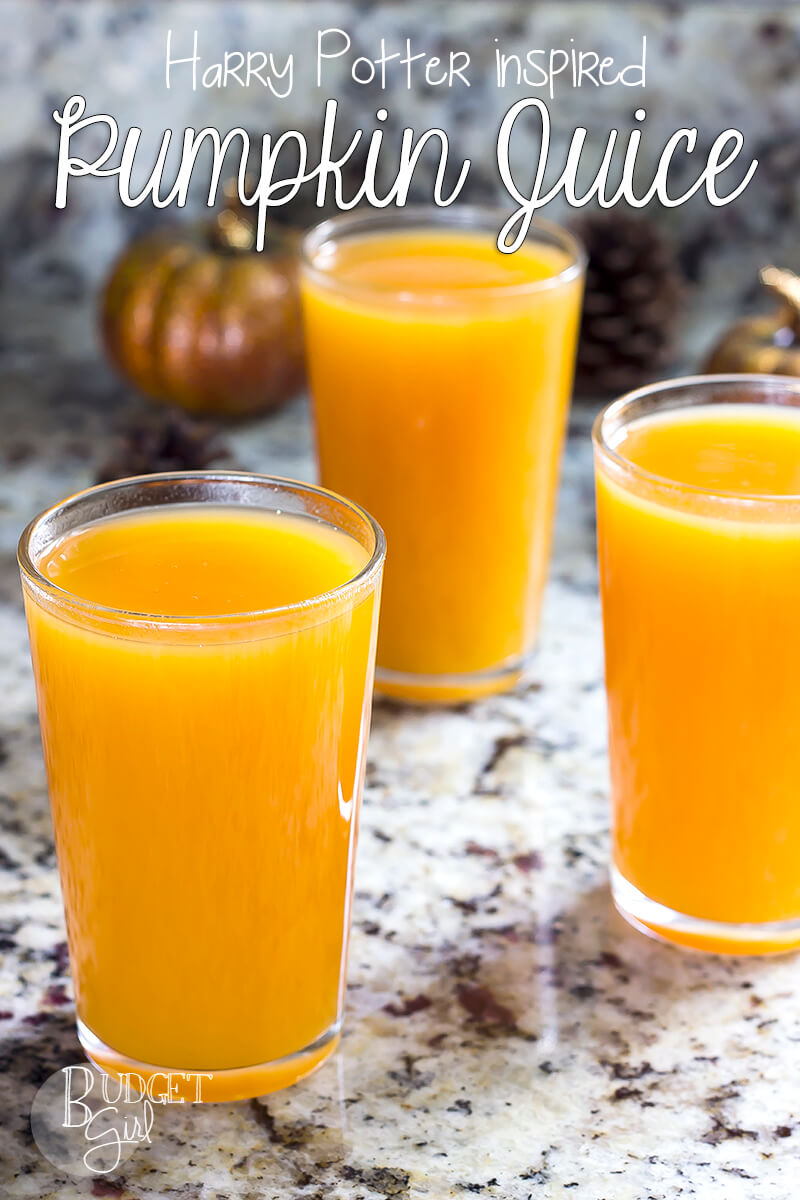 Step 01: Add the peaches and the water to a blender. Let the peaches thaw in the water for a few minutes and then puree them. Add the apple juice concentrate, the pumpkin, and the lemon juice. Puree until well-blended. 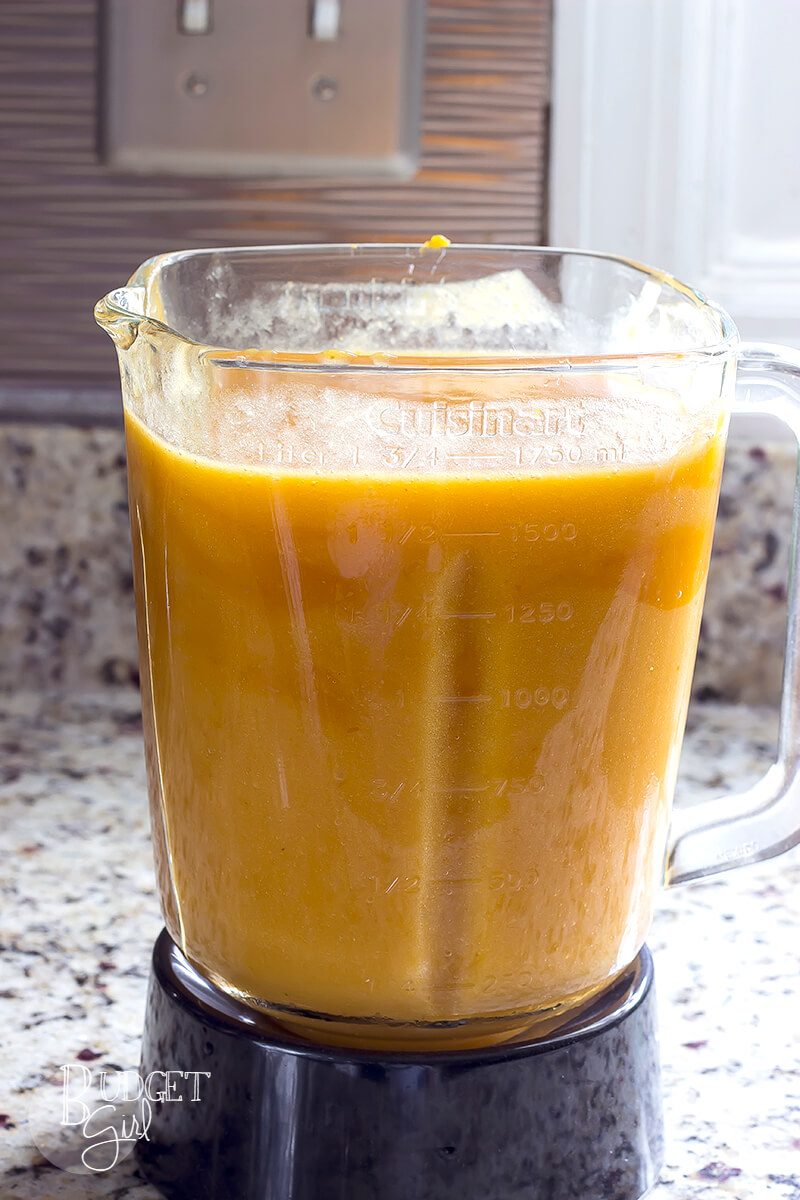 Step 02: Strain the mixture in a fine mesh strainer, cheese cloth, or a nut milk bag (I use this one, but this one gets fantastic reviews). I’d even recommend going through a mesh strainer first, because it will be faster. And then fine strain it with the nut milk bag. 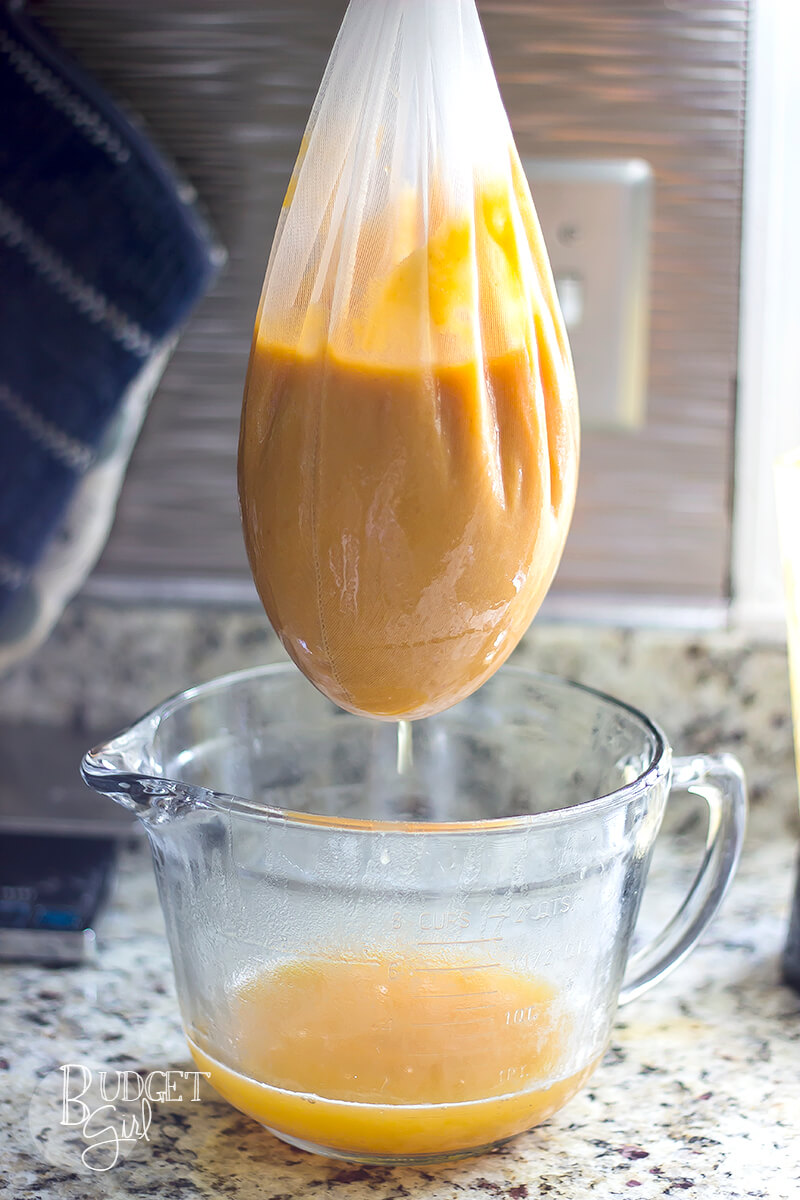 I use my nut milk bag by pouring the liquid in, tying the draw string around my cabinet knob, and hanging it over a bowl. This way, I can clean up while it’s straining. However, you will need to massage the bag every once in a while. (Writing this post just gets more and more awkward….)

Step 03: Once the juice has been strained, pour it into a container and enjoy! This recipe makes about 5 cups of juice. 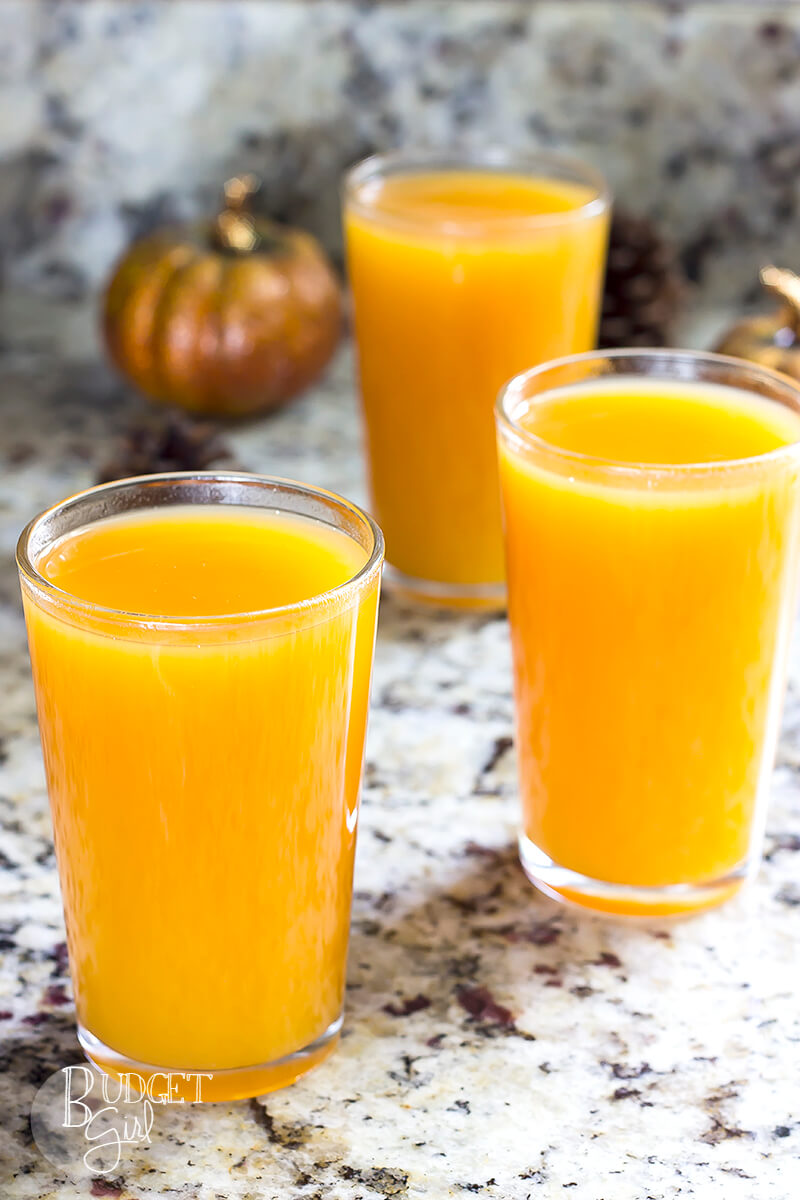 I wound up using peaches for two reasons.

I wound up not needing any extra sweetener. The apple juice concentrate and the peaches made it sweet enough. I added the lemon juice so it would keep longer…but we sucked it down within a couple of days, so there was no need. 😛

This juice is my new favorite drink. It’s refreshing and it tastes like fall. It made me really miss Morgantown, though, because all I could think of was how awesome this would be to take to a tailgate during football season and drink ice cold (and possibly spiked 😛 ). Mmmmm.

I also used this to make pumpkin beer cocktails (beermosas) for Growing Up Gabel. Check it out!

Are there any foods or drinks from Harry Potter that you’d like to see come alive? I would LOVE to do more of them! 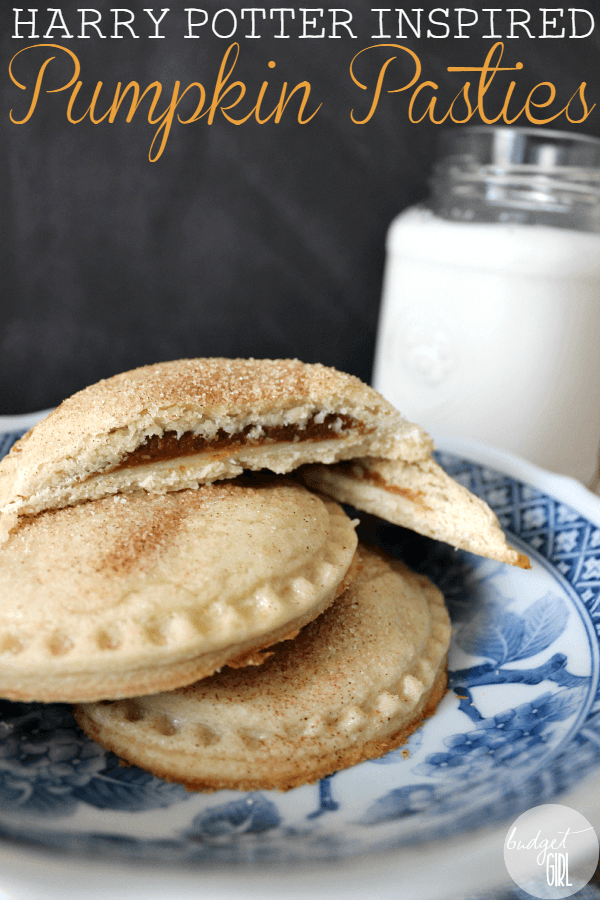 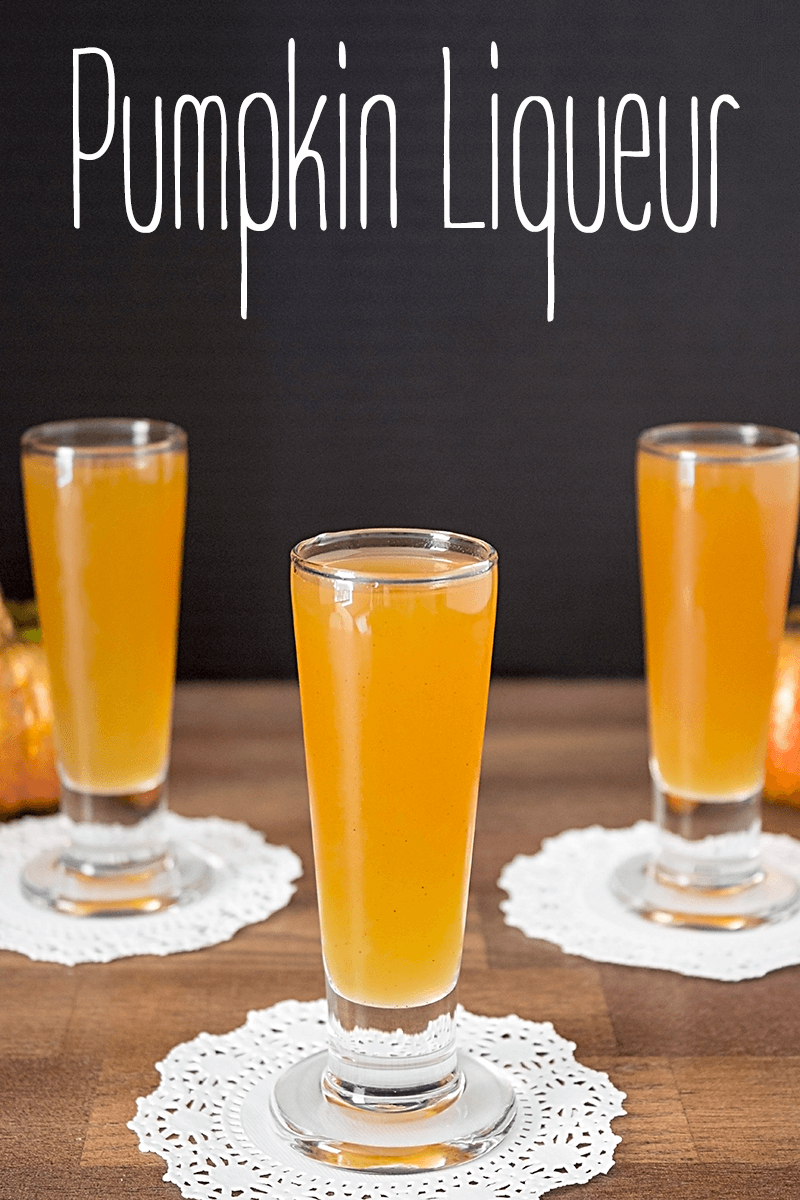 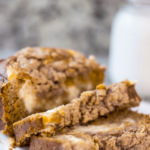 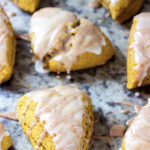 Phew! You are on a pumpkin recipe roll! But I think this is my favorite. I bet the peaches taste great. Thanks for linking up at Gingerly Made!

Hahaha! And I still have nine days of pumpkin left! 😛

The peaches were fantastic! They accented the pumpkin really well, which was unexpected.

Wow, this is AWESOME!
Thanks for sharing at #Pintorials 🙂

This sounds amazing. I just need to find some pumpkin puree now!

This sounds amazing! 😀 Can’t wait to try making it!

This is so different. I think this would make such a nice drink for a fall breakfast. Thanks for sharing on Merry Monday. Pinned & FB shared.

It definitely would! Thanks so much for pinning and sharing! 😀

I am so loving all your pumpkin recipes! Keep ’em coming:) Thanks for sharing all of them with us at the Teach Me Tuesday Linky Party!

This sounds like a wonderful fall drink, I am going to have to try this!

This sounds so good! I will surely have to give this one a try!

Oh wow! I had never heard of pumpkin juice before, but it sounds lovely! 🙂 Lisa

The color is just gorgeous and I think the recipe you came up with sounds fantastic. Refreshing and like Fall! Good job. Thanks for sharing on #overthemoon

This recipe sounds like so much fun! I love that it is Harry Potter inspired. Very creative

Visited from pinterest….looks and sounds awesome! As a WV girl now living in Florida i loved your Morgantown reference! Loved tailgating in the fall! Even though im a Marshall fan (GO HERD! Lol)…your post makes me think of home

Hello! My sister-in-law and cousin both went to Marshall and loved it, it’s a beautiful campus. (I very nearly went there, as well!) Hope you’re liking Florida! 🙂