I have a ton of cookbooks. 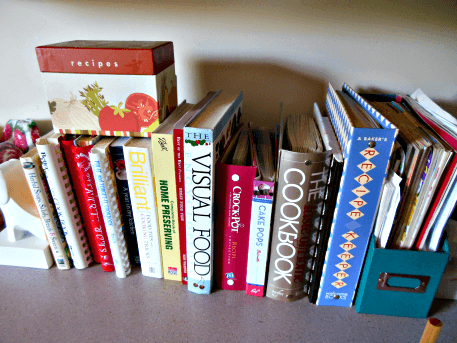 They all have their uses. “My Favorite Recipes” was given to me by my mom when I first got married, so I would have a recipe book to write in. My “Recipe Keeper” is a binder that came with these very nice pages (no lines! Love it!) that my mother-in-law gave me for my birthday a couple years ago. It’s made specifically for baking, which is wonderful because I have so many bread and dessert recipes, I didn’t know what to do with them all. I keep a magazine holder for the magazines I gathered while I was a member of The Cooking Club of America and Taste of Home. I especially like to pull those out around the holidays for some new ideas. I keep a composition notebook for recipes I want to try, so I don’t have to attempt to use my computer while I have ingredients all over my hands. It also prevents me from wasting precious space in an actual recipe book on a recipe I might not like. I have a special recipe book for my pressure cooker, also given to me by my mom. The other books were given to us by Zach’s grandmother (except the Cake Pops book, which was given to me by Zach). Zach’s grandma has dozens of cookbooks. Enough that she needed an entire bookcase installed in her kitchen to hold all of them. (If only I had a big enough kitchen….)

But my absolute favorite way to store recipes? A recipe box.

It’s just so versatile. You can remove sections, move sections, add new cards, lend your cards (without lending a whole cookbook!). If you decide you hate a recipe (or that you skipped an entire step when you wrote it down! Done that), you can throw it out without screwing up page numbers. If you accidentally put something in the wrong section (done this, too, but in a book…ugh), you just pluck it out of there and stick it where it belongs.

So when my sister-in-law told me she wanted to learn how to cook some of the things I’ve made for her, I decided that a special recipe box would be the perfect gift for her birthday. But not just some store-bought, write-it-yourself recipe box. What she really needed was a handmade, recipes-included recipe box. Which is exactly what I made her. 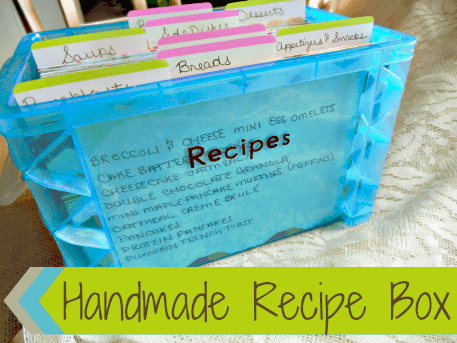 It took me a while to get into the groove of this project, so I’m glad I started this in March (her birthday is near the end of July). I screwed up so many times and wound up having to start completely over, even after finishing the project (originally it was going to be a handmade recipe book–and then I realized it wasn’t working and “DUH! Recipe box!” I felt incredibly stupid for not thinking of it at first, but I managed to get there). Here’s what wound up working for me!

Step 01: I spent a few weeks gathering recipes I knew she liked and thought she would like, all of different difficulty levels (most are low-to-moderate difficulty and can be thrown into a crock pot, which was also a priority since she has a full-time job). Anytime she came over for dinner, I noted what she liked and put it on the list. I ended with about 75 recipes, noted the ones that were a priority (in case I ran out of room), and then got my supplies.

Step 02: Now the project begins! First, Put a regular recipe card on top of your scrapbook paper and trace around it. 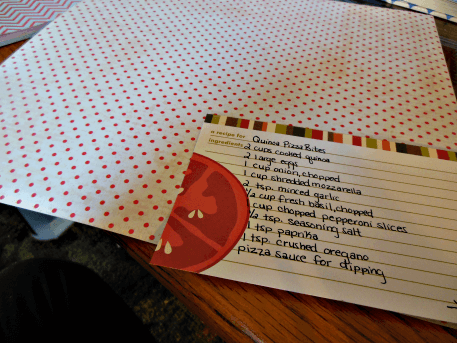 Step 02: Use your paper trimmer to cut out the card-sized paper. 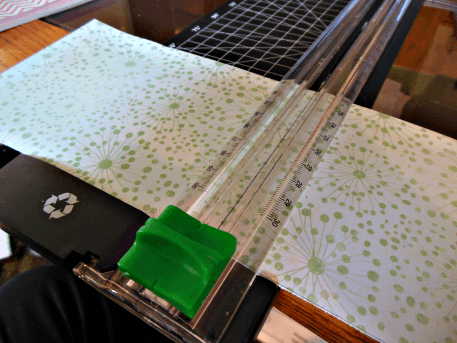 I got about 6 cards out of each piece of scrapbook paper and I still have a ton of paper left over. One book of paper will be more than enough for one recipe box.

Stack those into a nice, neat pile and set them aside. 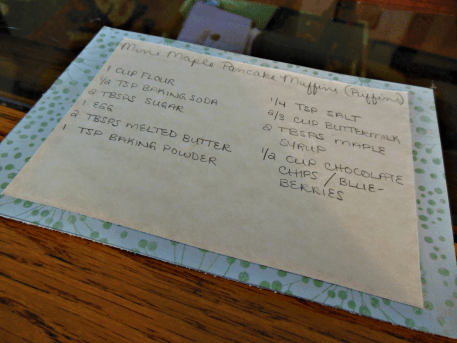 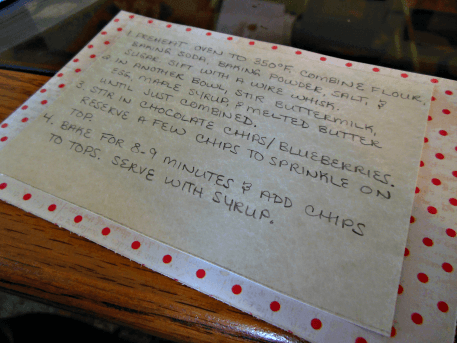 Step 04: If you chose to go over this in pen, do that now. If not, you can just slap some mod podge on the cards and be done with that part. I went over it in pen. If you use a fountain pen or gel pen, do not use brush-on mod podge. Not at first, anyway. No matter how long you wait, mod podge will cause the ink to smear badly. If you want to mod podge your cards, first spray a sealer on them. (I used a mod podge spray sealer, but then ran out and used Krylon Matte Finish. As long as it says it can be used on paper, it will work.) 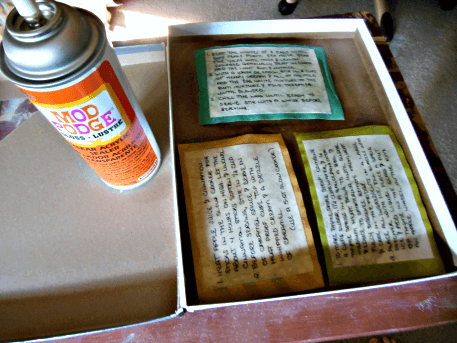 Put on two or three coats. Once the ink has been sealed, you can go ahead and brush some mod podge on there. If you don’t want to, that’s fine. It’s still cute (I chose not to). The benefit of the mod podge is that it makes the texture of the two types of paper look more uniform.  It will also give your cards a cute, homemade look. I do like mod podge on these, but I chose not to do it mostly for time’s sake.

If you don’t want to have to go back over these with ink, using brush-on mod podge will make the pencil stand out more. So don’t worry about it. (I made some for my sister, as well, and I just went over the pencil in mod podge. She says it looks like pen and she has no trouble reading it.)

Step 05: Put them in the order you want them to appear in the box and make some category cards. I made the category cards in the same way as the recipes and then added Post-It tabs. 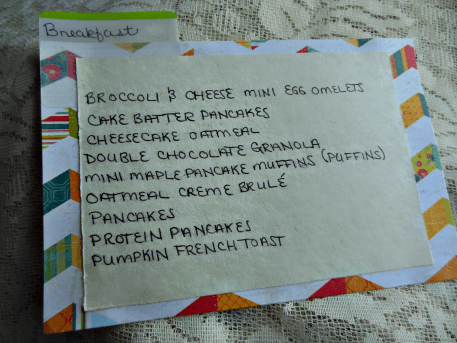 Put your cards in the box.

Step 06: You can actually stop there. However, I bought some black glittery letter stickers and spelled out “Recipes” on the front of the box. Mostly to indicate that it’s the front, but it also turned out very cute. 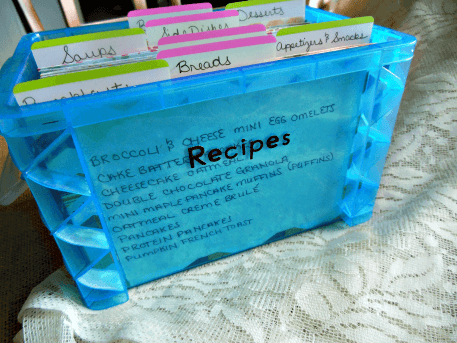 The beauty of the box I chose to use is the clear lid. If she doesn’t want to make a mess on her cards, she can put a recipe under the lid and read it that way. 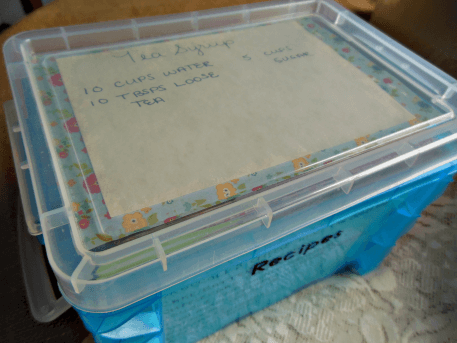 It’s actually much easier than that to read the card. I just didn’t put the lid all the way on.

It’s not a difficult project, it’s just time-consuming. (As all of mine tend to be.) I suggest turning on a favorite TV show or something to make time go faster. 😛

Her birthday isn’t until the 20th, but I won’t see her then, so I gave it to her this past weekend and she loved it!

I hate doing a break-down of cost when it’s a present. And since I don’t know if she reads this blog or not, I’m not going to do that. I had a lot of fun making it, though! And hopefully she gets a lot of use out of it.

(In case you’re curious, the scrapbook paper I used was found at Wal-Mart and it’s called “Beach House.”)

I still have it! I was trying to paste a picture of it onto to here. I’ve used it so many times that I need to reorganize the cards to their right place. The most recipe I’ve probably used out of it was the Parmesan crusted tilapia. Super cheap and good!

That is one of my favorites! And now you know how I made the cards, so if you want to get rid of the recipes you don’t like and add some more, now you can! 😀