Apparently a great way to wash your towels when you notice them smelling a little odd is to wash them in vinegar and baking soda. I have heard this a few times. I have also heard that the residue from detergent and fabric softener is the cause of this (though I would say not allowing them to dry properly after using them doesn’t help, either). So I gave it a try!

I honestly didn’t expect this to succeed, because I have debunked a few Internet “old-wives’ tales” (like leaving a wooden spoon on a boiling pot to keep it from boiling over–I knew it wouldn’t work, but had to try it anyway). My towels smell much nicer, though! Getting that mildew out is so easy…and you can do it with clothes, too!

Step 01:  Run hot water in your washing machine. Add the white vinegar and then start loading your laundry. (Obviously don’t use hot water with clothes.)

Step 02: When the laundry has finished, put some baking soda in there with the clothes and run a hot cycle again.

Step 03: Once the laundry has finished the second run, throw it in the dryer and run it as you normally would.

And that’s it! Your towels should be pretty fresh now.

Do not put the vinegar and baking soda in the washer at once. I know it is tempting to save time and water…but it won’t work. Vinegar and baking soda react to each other (remember those volcanoes you did in elementary school?) and will only wind up creating water. So putting them in at the same time won’t help. 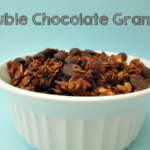