I have seen these all over Pinterest lately. Apparently they’re very popular (and very expensive) at Pottery Barn. (I don’t have a Pottery Barn here, so Pinterest was the first I had heard of them.) They were really cute, though, and quite useful, so I decided to make one. Silly me didn’t read anyone’s instructions first, though, so I made a couple mistakes I probably could have avoided. Either way, it came out nicely! 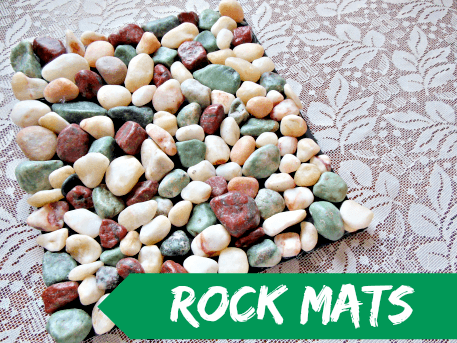 Step 01: First, I laid my rocks down on the foam, to see generally where I wanted to put them.

I’ve seen some that are circles and they’re really pretty. But I wanted a square. Just for now. I may make a circle later.

Step 02: Once I was happy with the placement, I glued down everything on the outside edge, using hot glue. Then I cut off the extra foam.

The reason I glued first was so I could just leave all of the rocks on there. The rocks on the edge keep the ones on the inside from falling out, as long as you’re gentle while you cut. As far as the hot glue goes…I don’t recommend using just hot glue for this project. I used it for the edges because it would dry fast and let me cut. However, once that part is over,  you will need to re-glue them using something stronger. The rocks are too smooth for the hot glue to stick. Mine started popping off almost immediately. Superglue is actually really great for this. But it takes a lot of it. That’s why I used wood glue. I needed a good bit and it was the only other glue I had.  But once it dries, it’s has a very strong hold.

Step 03: Now, remove a couple rocks at a time, glue them, and put them back. Don’t remove too many because, if you’re like me, you will never figure out where you originally had them. The most I moved at a time was about three or four. This process took a little while, but I thought it was the easiest part. (The part I hated was sitting there trying to place the rocks in all the spots. That took about two hours.) In fact, turn on a show or movie while you do this part. It’s quite brainless, so you’ll be bored if you don’t have anything else to entertain you. Let it dry overnight before using it.

This is the result:

It’s very useful! I was worried it wouldn’t work, honestly. But it does. Here are a few things I learned, though:

This project cost me about $4 total ($2.99 for the rocks and $0.99 for the foam). I also have some extra foam that may be useful later. Though I can’t figure out what to do with it just yet. 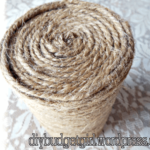 How to Clean Your Make-Up Brushes

I love the colors, turned our really cute!
I also don’t have a Pottery Barn where I live, so I have never seen one of these in person only on pinterest as well. But I never thought of DIY-ing my own… so smart!

I think it turned out really nice! I bet it feels good on the feet when your barefoot. I would love to have my shower floor done like this, with rocks.