I love soup. It’s delicious and cozy. You can take nearly any soup recipe, add things to it, substitute any of the ingredients with something else and it will most likely still turn out amazing. Soup is so versatile and I love versatile. (Anyone else ever realized you forgot an ingredient and absolutely refused to go back to the store? That’s why I love versatile meals.)

Soup is also, in general, easy. Don’t feel like cooking? Soup. (I do that all the time. “Sorry, Zach, but your regularly scheduled meal was just too energy-consuming. You will be having soup instead.” I never hear complaints, though.) Want something healthy? Take any soup recipe you have, add more vegetables, beans, lentils, meat, etc. and then remove heavy creams and sauces. Having more people over? Add more water and some extra herbs and spices. Easy, cheap, clean meal. Don’t eat meat? Substitute any meat with lentils and beans. Still delicious.

And nothing gets me in the mood for soup more than cold weather. Even though fall isn’t here yet, I’m getting the bug. I have a list of soups I want to try (and hopefully make regular rotations of during the next few months). One of those is a variation of my favorite soup from last year: stuffed pepper. Also, one of my new favorite things is to add taco seasoning to something and call it “southwestern style.” It makes people think you came up with some fancy new recipe. 😛

*These are all ingredients found in taco seasoning. You can simply replace them with one or two packets of seasoning, if you prefer.

Step 01: Brown meat, chop peppers, and cook rice and lentils separately according to their packaged directions. Don’t add the rice or lentils until the soup is done, or you’ll risk over-boiling and releasing all the starch (which will leave you with a thick, flavorless stew instead of a soup.)

Step 02: Toss everything into a large stock pot. Boil until peppers are tender.

As you can see, I added some extra stuff–yellow squash and zucchini. Because they were about to go bad. 😛

You’re done! Don’t you love recipes with minimal directions? It gives you more wiggle room. In general, once I try a recipe and know what I’m going for…I never use it again. I just remember most of what I did the first time and then make the rest up as I go along. My meals turn out better for it.

It’s a lot of ingredients, but it’s well worth it. Zach and I got three days’ worth of leftovers out of this. I also recommend freezing it for later and stocking up for the winter.

How to Edit Lighting 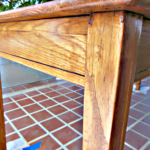 How to Stain Wood Furniture

Perfect for fall. Definitely pinning this one. Thanks for sharing.

Maybe? 😛 It may have gotten lost when I moved everything. I think I remember you commenting, though.