When Zach and I got married, I knew generally how to cook, but I had never really made anything from scratch before. Except cheesecake. Mmmm.

But we owned a ton of cookbooks, mostly given to us by his grandmother, and we are fortunate enough to live in the Age of the Internet. So learning how to cook wasn’t such a huge, horrible task. Since we were on a budget, I decided learning how to cook from scratch would be beneficial. It’s nice to know what is in your food…and it’s way cheaper to buy all of your ingredients in bulk and get a couple dozen meals out of them than it is to just…buy the meal (this can be confirmed by simply going out to eat and taking a look at your bill).

One of the first things I made Zach once we were married was this tuna noodle casserole. And it quickly became one of his favorite meals. I don’t make it very often anymore, since we cut back on carbs nearly a year ago. (Btw, I’ve lost 30 pounds! 😀 My doctor and I are both very excited.) But last week, I got my hands on some delicious gluten free noodles and I decided to give them a try. I don’t need to eat gluten free, but these noodles were delicious! I wish I could remember what brand they were…. 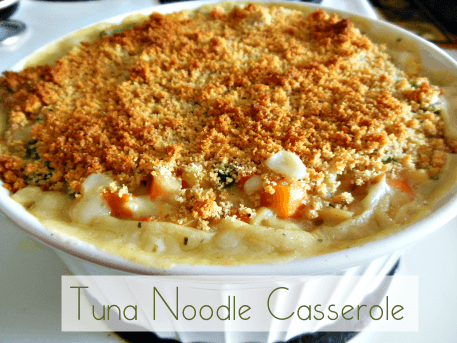 What you will need:

Step 01: First, make your life easier by preparing all of your ingredients. Trust me. Now start by melting 1 TBSP butter and then mixing it with the dry bread crumbs. Set aside. Boil your noodles. Drain and set that aside, as well.

Step 02: Melt the other 3 TBSPS butter in a medium to large saucepan. Add the frozen vegetables until they are tender. (You don’t have to thaw the vegetables, but you can if you want.)

Step 03: Stir in the flour and dry mustard. Coat the vegetables. Then quickly add the milk and the chicken broth at the same time. Cook and stir until thick and bubbly and then add your seasonings.

Step 04: Remove from heat and combine sauce, noodles, and tuna in the saucepan.

Step 05: Transfer everything to a 1 1/2-quart casserole dish. Sprinkle with crumb mixture. Bake, uncovered, at 375 for 20 minutes.

This goes best with mashed potatoes. 😛

Why do I always read recipes online while I’m hungry?! 😛