I need to rant for just a moment.

Lately I’ve been noticing a trend on Twitter. I mentioned a few months ago that I found it useless for traffic. The big reason? Because the attitude seems to be, “I’ll follow you as long as you follow me.” So most bloggers are following hundreds or thousands of people.

I understand if this is how you want to run your Twitter account. Who you follow and why is your business, so if you want to treat social media as an obligatory “follow me/follow you” situation, go for it. My problem is that many bloggers who believe following back is required are also kind of obnoxious about it. 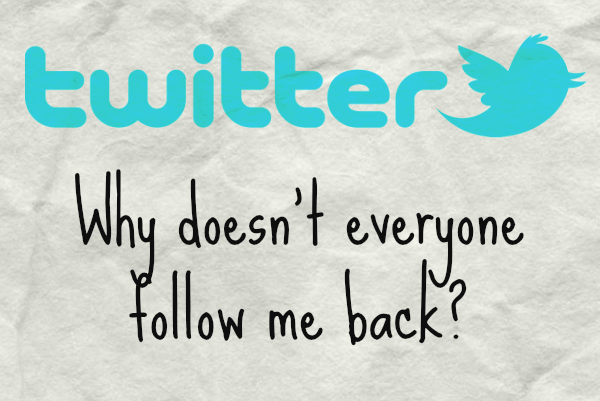 For some people, when they follow someone, they don’t just expect that person to follow back. They demand it. In fact, yesterday I read a post by another blogger lamenting the fact that she needed to unfollow over 2000 people because they weren’t following her back. She described herself as “doing all the work in the relationship.” She seemed legitimately bitter about it…about all these people she’s never met or even spoken to.

First, RELATIONSHIP? What relationship? If you are following over 2000 people, those are not relationships. No, really. Name them. Name ALL of them, without looking, and then maybe I’ll believe they are real relationships. No. Those people were only numbers to you. Second, who wants 2000 followers who are only doing it out of obligation? I sure don’t. If you’re following me and just sitting there, pretending I don’t exist as you scroll through the rest of your feed, then please stop following me.

Look. I’m sure you’re a nice person. I’m sure your blog is very interesting…to the right person. But–and this is especially true if you’re a heavily niched blog–you need to stop following people just for a follow back.

So when someone doesn’t follow me, I don’t take offense. What’s the point? Some stranger out in Who Gives a Crap, USA doesn’t want to bask in the genius of my blog? I’m not exactly going to cry myself to sleep over it.

I follow people I’m interested in and, no, I never expect them to follow me back. Because that is the point of social media–to actually connect with your followers, to actually make friends with other bloggers. So if someone isn’t interested in blogging advice, knitting, or food…so what? I’m not interested in parenting blogs (I don’t have kids, so why would I be?). It’s just life. But I can’t believe the number of people who get upset over that.

The entitlement issues go even further. A few months ago, I unfollowed a girl because she was posting way too often and, frankly, I just wasn’t interested in her content (I can’t remember why I started following in the first place). She sent me a message asking why I wasn’t following her anymore. I had to delete it before I gave in to the temptation to reply, “BECAUSE YOU’RE ANNOYING, OMFG.” Trust me, if someone stops following you, the best decision is to just suck it up and move on. Don’t ask them why, because the answer is 99% sure to upset you.

I know this sounds mean…and really, it kind of is. But who ever said truth was nice? And this happens to all of us. Do you think I haven’t been unfollowed? I definitely have by many people. But I can’t tell you who it was or why. Blogging isn’t about popularity, it’s about real relationships. You want to grow your following on social media? Connect with people. Maintain a presence. It will be slower, but the people who follow you will be doing it because they like you and not just as a way to keep you from unfollowing them in a week.

How to Choose a Web Host

I love your series on blogging. And I totally needed to hear this re following on Twitter! You’re so right. I never get mad, but sometimes I take it personally – and I shouldn’t! I do try to follow people back if they’re tweeting about things I’m interested in. But it bugs me when those people who follow me, I follow them back and then they unfollow me. I know, I know – I need to just get over it 😉

Those people bother me for a whole different reason. They’re setting up their accounts to follow people in order to take advantage of the “obligatory follow back” rule. It’s their way of gaming the system to increase followers without having to do any actual networking. I’ve had people follow me who very clearly have no clue what I tweet/blog about. Drives me insane. (In fact, I currently have another blogger who is INSISTING that I am a fashion blogger. I have no idea how that even started.)

Glad you found this helpful, though! 🙂