This is something I’ve been putting off writing for a while, but it’s time to talk about it.

I am not a doctor or a nutrition specialist of any kind. But there is one thing I can tell you: we need to educate ourselves more when it comes to healthy food.

I can’t tell you the number of comments I get (on and off this website) praising me for posting a healthy recipe.

It’s not just my recipes people talk about, though. I see this on pins constantly and it drives me up the wall.

This isn’t about body policing. I’m not telling you what to eat, I’m not shaming you for liking unhealthy foods or loving your body (you should). But I really hate sitting back and watching perfectly well-meaning people sabotage themselves and each other because they don’t understand what constitutes as healthy food. I hate seeing people who desperately want to eat healthy wind up doing the exact opposite just because they don’t know.

Look, I’m overweight. Even after a 30 pound loss (albeit, a while ago), I am still overweight. I understand the struggle.

But a lot of people don’t. I’m seeing the same people–the people struggling to get their weight under control–making the same mistakes with “healthy” food labels. So let’s talk about what isn’t healthy. 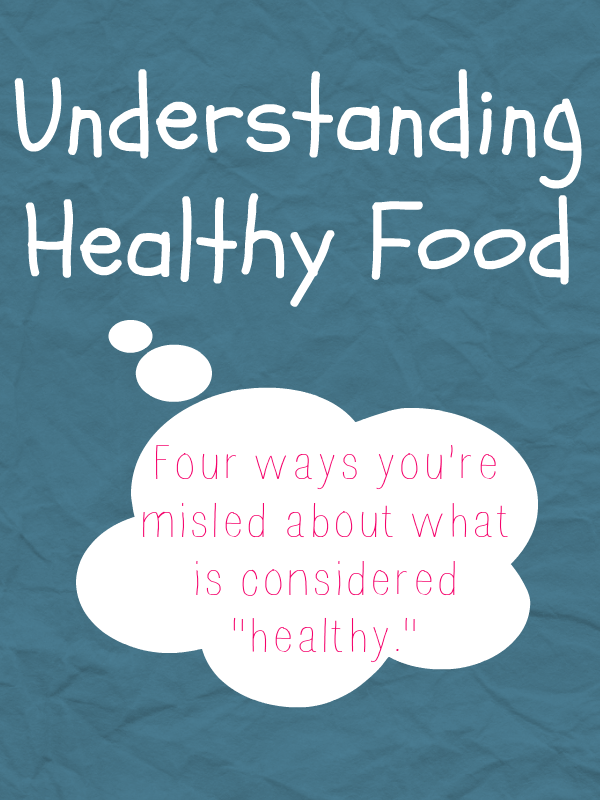 1. Adding fruit does not make it healthy.

I posted my blueberry coconut cornbread a couple weeks ago. It’s basically the same as any other sweetened cornbread, except I added blueberries and used coffee creamer (which is loaded with refined sugar, by the way) to replace some of the milk content. People all over the Internet seem to think that the addition of blueberries makes this cornbread healthy.

No. It absolutely does not.

If adding fruit to food automatically made it healthy, I would eat pie all day every day no questions asked.

But pie isn’t good for you (and I really hope you knew that without me having to tell you). I would develop diabetes within the year, most likely. Which sucks, because I love pie. Probably more than any human really should.

I don’t care if it’s raw, organic sugar. I don’t care if they substituted the butter and flour with healthier alternatives. Foods containing too much sugar are not healthy. Period. Even fruit needs to be eaten in moderation–it’s loaded with lots of good stuff, yes, but it’s also loaded with tons and tons and sugar. (Also why juicing isn’t good for you–you’re getting rid of the pulp, which contains a good portion of the healthy stuff. Really, juice is just sugar water. But that’s a rant for another time.)

Yes, there was a time when sugar was actually thought to be a health food. It’s possible some of my readers grew up during that time.

Times change. Now we know that sugar isn’t that great for you.

That doesn’t mean you have to completely give it up (unless your doctor says so). It just means you need to moderate. You don’t need more than that one piece of cake. Really.

On a similar note, the pumpkin brownies (box of brownie mix + can of pumpkin) that were so popular last year? NOT HEALTHY. (I saw a lot of comments about that, too.) Just because you didn’t personally add the sugar and flour, that doesn’t mean they aren’t there.

3. Low calorie does not equal “healthy.”

I’m so sick of hearing about calories.

Yes, they play a factor. If you’re eating a lot of high calorie foods, they’re probably not coming from healthy sources. And if you’re going to have a snack or a dessert, it’s better to go for the low calorie alternative. But just because something is a “better” option does not mean it’s the “best” option (which is how commercials get you–we’ll get to that in a moment).

Lean Cuisines are low calorie, but have you seen the sodium content? You can’t live on those things, you’ll have a heart attack.

If I wanted to, I could turn that into an entire blog post, but I’ll spare you.

Basically, you can’t judge a food’s health-factor on its calories. Next.

4. If it has its own commercial, it’s not good for you.

Did you know Yoplait is actually really unhealthy (though they cut out the high fructose corn syrup last year)? You wouldn’t think so, though, since the commercials are all fit women who don’t actually need to be dieting. There’s a reason they do that and mostly it’s to screw with your mind. (We call that a “subliminal message.”)

Commercials are written very specifically to make you think they’re saying something they’re not (rather, something they want to say but legally can’t). Diet pills can’t actually say they’re good for you and that they directly cause weight loss (though they can say they cause weight loss when mixed with a healthy diet and exercise plan)–but they can say that many of the people taking their diet pills lost weight. What they’re not telling you is that their pill had nothing to do with it. They’re taking facts that have nothing to do with each other (Woman took our pills. Woman lost 100 pounds! And in small print, “Woman also exercised 1 hour every day and restricted herself to a 1200 calorie per day diet consisting of whole foods, vegetables, and meats”) and letting your brain come to its own (incorrect) conclusions. And voila! You’ve just made that company huge amounts of money.

How do you avoid buying unhealthy “health” food? Read the nutritional facts. I know the ingredients list is filled with things that are difficult to pronounce…but that’s the magic of Google. You can only help yourself by figuring out what you should and shouldn’t be eating, instead of letting corporate packaging do the thinking for you.

That said, if you like Yoplait and don’t care if it’s healthy–keep eating it! I really don’t care what you put into your system, to be honest. All I want is for you to do it knowing the truth, instead of thinking it’s doing your body good.

There’s actually more I can go into, but I’ll leave it at these four today. Did you learn anything? Or is there a nutrition pet peeve of your own  you’d like to share? Leave it in the comments!

Building a Computer vs. Buying: What to do when your parts arrive.

I love your first one! I like to joke around that ice cream has dairy, which has calcium, so it must be good for me. It’s funny how we try to ‘trick’ ourselves.

Hahaha! I actually do the same thing! Especially with alcohol, if I mix it with orange juice. “It’s filled with Vitamin C! That means it’s good for you!” Definitely a joke, but ever since I started running this blog, I have to admit…I wonder how many people think it really is. 😛

Yay for you. This is entirely accurate. My rule of thumb? I look at the nutrients in the food, vitamins, fiber, protein, etc. before I decide to buy it. All natural black licorice is sometimes loaded with good for you iron. Most all-natural cereals, though, have no vitamins or minerals – so what’s the point of $5/box. Eek.

Definitely! Too many people fall into the, “Well, they can’t say it’s healthy if it really isn’t!” trap and it’s simply not true. I hate to see people sabotaging themselves and not really knowing why.

Hmm, I learn something new everyday. Everything I know about my diet is a lie! Haha, wow. I eat yogurt every morning for breakfast, I’m going to miss my keylime pie in the morning. Thanks for sharing & happy Friday!

Yogurt is delicious and makes a great breakfast (I love mixing mine with granola). If you’re happy with where you stand, then I see no reason to change. Yoplait is delicious (my favorite is the boston cream pie). But there are definitely healthier yogurts out there!

HI. I love your post. This past year I’ve overhauled my former eating habits, so I totally get what you are saying. We (as a society) have been led to believe a lot of healthy myths that are not true. What I’ve come to realize through a lot of reading and doc appointments is that eating whole foods is one of the single best efforts to achieve optimal health. It’s just so easy to buy veggie chips instead of baby carrots or drink diet soda instead of water with a lemon. I know because I used to love my Diet Dr. Pepper and Baked Lays. But I will say, since I stopped eating processed foods, I feel less bloated, thinner (though I’m not really that much thinner but I feel so much better) and my skin in clearer. So, I just wanted to say I love your post.

Absolutely true! One of the best dieting tips I ever heard was, “Food can either be your body’s greatest weapon or its slowest poison.” Those foods make you feel bad for a reason! I’m glad you enjoyed my post, Caryn. Thanks for stopping by! 🙂

You are so right on so many counts! I would add if it’s made in a factory and sold in a box, bypass it! Nowadays we all get caught up in convenience. What if we actually slowed down? Great post – thanks for linking up!

That, too! People want both easy and healthy…but the best way to get that is to just eat raw vegetables. Definitely not something like Fiber One bars (and it drives me nuts that people think those are healthy). Thanks for stopping by!