I’ve had posts backed up for…months. Mostly posts that I kept forgetting to write or just didn’t feel like writing. Over the weekend, Zach and I sat down at the kitchen table with our laptops so we could both try to get some work done…and I discovered that I had over twelve posts that I hadn’t written yet. Including this one…from our Easter dinner. Whoops!

I believe I mentioned this, but we decided to combine Easter with TableTop Day, so we had Easter dinner a day early. Naturally, we made a small ham. I meant to do an apple cider ham, but couldn’t find apple cider. So I used Simply Apple, instead. Yum! 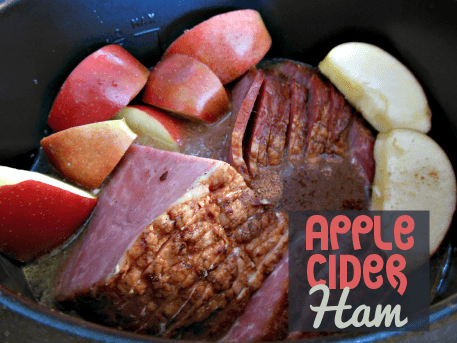 Step 01 PC: In a pressure cooker (yes, I am addicted), heat the oil and butter on “brown.” Place the ham in the cooker and add Simply Apple, salt, apple slices, and allspice. Lock the lid and cook on “high” for 65 minutes.

In my haste to eat dinner, I forgot to take more pictures. 😛 But this was delicious.

Yum! Your recipes are always so great 🙂