Baking Brownies in a Cookie Cutter & Why it Doesn’t Work

Quick Note: I’m currently running a two-week trial with Media.net. I’ve put up a couple of their ads already and we’ll see how this goes. My main priority is, and always has been, putting my best effort into creating content for all of you. So if you notice any new problems or slowness, let me know and I will take your concerns into consideration when my trial period ends. Thanks!

This really cute thing has been showing up on my Pinterest page lately: 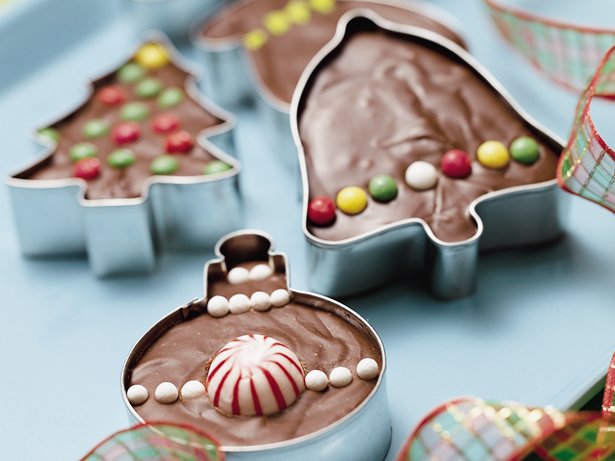 Do you know what that is?

The picture came from Betty Crocker’s website…and Betty Crocker says it’s fudge. Which makes way more sense (and I need to try this for Christmas, how cute!). Of course, the original source couldn’t be found when I clicked the picture on Pinterest, which means I had to go hunting. (By the way, I think we should have a discussion about crediting on Pinterest soon.)

But after seeing the rumor on Pinterest that they were brownies…it had me wondering: is it possible?

Actually, it is possible. But it’s not easy…and it definitely didn’t work for me. Let me explain why. 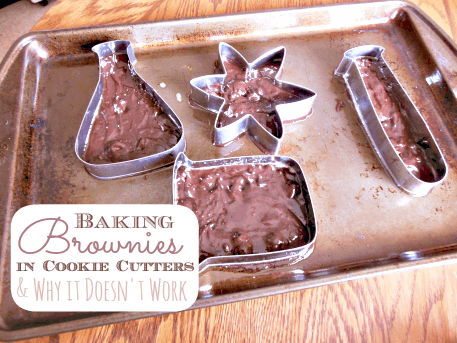 My mom got me these really cool science cookie cutters (affiliate link) for my birthday a couple years ago. They’re awesome, but they’re kind of a pain to use (they’re way too big and, as a result, don’t make a lot of cookies). So I decided they would be perfect for my little experiment. 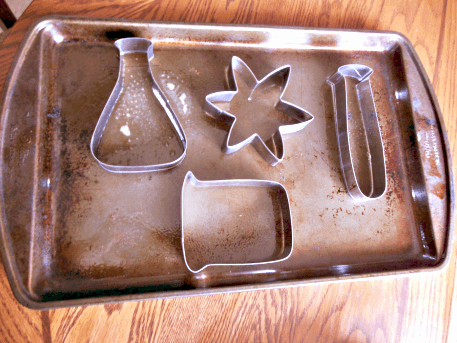 If you look closely at the picture above, you may be able to spot the first hint that the brownies will not be able to be baked inside the cutters. Cookie cutters don’t need to be even on bottom. When cutting a cookie, you can just press down harder on the end that sticks up a little and you still get an evenly cut cookie. The light shining underneath the cookie cutters should show you that they’re uneven. With fudge, the surface hardens the moment cool air touches it long enough. So it would sit just fine in a cookie cutter. Brownie batter, on the other hand, gets softer before it gets harder. 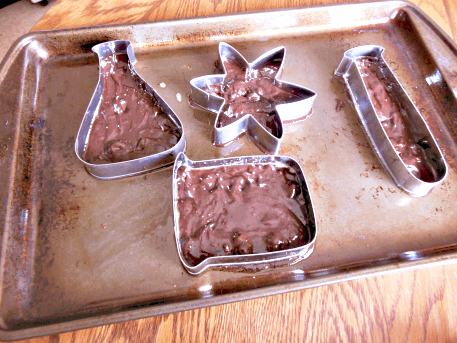 Brownie batter is thick, so while it leaked a little at first, it wasn’t much. So I kept going. (If you look hard enough, you can see little leakages under the beaker and the atom.) However, the heat from the oven causes the ingredients to liquefy a little before they start to actually bake together. Which means after 10 minutes in the oven, I wound up with this: 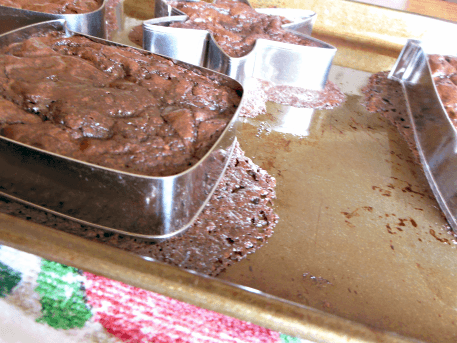 It leaked more. Not too much, but enough to be annoying. All of them did that.

So that’s the first reason baking brownies in a cookie cutter doesn’t work so well. It’s really not a big deal.

But it gets worse. Because the second reason is this: 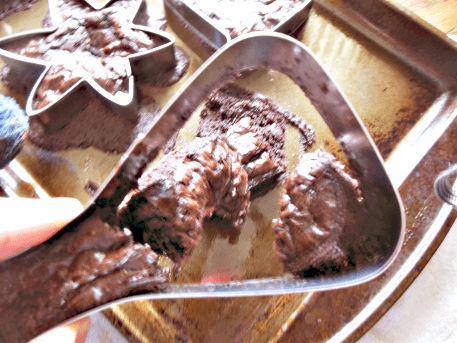 Getting them out. The brownie pictured above was such a pain to get out and made me so mad…so I revenge-ate its face.

I sprayed the cookie cutters a lot before adding the brownie mix. The problem is that some parts of the cookie cutter are bigger than others, so the brownies didn’t bake evenly. At all. They were done, but the narrower parts were more done than the others. And they wound up sticking into the crevices (getting the brownie out of the atom was impossible. I had to pull it out bit-by-bit).

Now certain cookie cutters might work. If the cutter doesn’t have a lot of detail and is relatively small, it might work. A snowman, for instance, is possible (I won’t bet on it, though). A Christmas tree? Definitely not.

From now on, I’ll just stick to baking the brownies in a regular baking dish first and cutting out the shapes when they’re done. 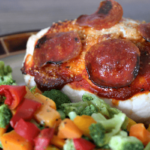 I’ve also seen that same pin everywhere on Pinterest! They certainly look like brownies at first glance, but I think you’re correct. They’re actually fudge. Maybe next time bake a pan of brownies and use the cutters to cut them out? Your cutters are super cute. They would be amazing little cakes decorated for Halloween.

Sorry they didn’t work out! It was a great idea and it is still a really cute idea for fudge. Stopping by from the Pin It Party.

That’s OK! Even after they fell apart, they were still delicious. 😛 Thanks for stopping by! 🙂

I agree that discussions need to be had about giving credit properly on Pinterest! Like you, I have found a LOT of pins that are inaccurate or not linked to the original source! I love that you tried this and proved why it won’t work! Thanks so much for sharing at THE Pin It Party!

It’s so irritating, isn’t it? I’m glad you enjoyed this, though! There are so many things on Pinterest that need debunking. 😛

Hehe 😛 Yeah, maybe we should stick to fudge – although I could see them being hard to get out of the cookie cutters too.

Yeah, I’m not all that sure how to get fudge out, either….

I think it’s time to experiment with that! 😀

When I saw this picture – yes, I saw it also – I wondered the same thing. Would this work? Well, thanks for trying it out so I don’t have to. I can see that the fudge would work. That would be cute but would be way too big for individual fudge pieces, right? Well, have a great creative week .. Linda

Haha! No problem. 🙂 Yeah, I think it would probably be too big for fudge, as well. I have much smaller ones for Christmas, though, so they might work. I’ll have to test that, as well. 😛 Thanks for stopping by!

Guilty – I’ve had that picture pinned for awhile. I’ve never attempted it, though…I think deep down I knew that it looked too good to be true and was destined to be a Pinterest-fail. Doesn’t it seem easier to bake brownies in a rectangular pan and cut desired shapes with cookie cutters? Plus you get to “sample” the excess scraps 🙂

Haha! I also had it pinned for a while and then got it in my head to try it. Most of my beef is with the person who originally changed both the pin’s source and the description of what it was. It’s only natural that everyone would repin (I did!), because it was so interesting! And you’re right–that is way easier and who doesn’t love “sampling.” 😛

I agree, makes me think about how many pins must have gone through a game of Telephone. Another one I can think of is an impossibly cute bunny-shaped bread roll that “only takes a few scissor snips”. It came out that I think it’s actually a cookie. Seeing the pins of people who tried to make it with bread and posted their less-than-perfect results is hilarious.

Thanks so much Chelsey! My daughters wanted to do the brownies for teacher gifts for Christmas. After reading your post, I made brownies in a sheet pan and pressed the cutters in. I kept them in the cutter and wrapped them up. They came out perfectly and will slide right out. Plus we got the bonus scraps as you mentioned! So glad we read your post!!

I’m so glad it was helpful, Chris! Those are sure to be a hit with your daughters’ teachers. Thanks for stopping by! 😀

I’ve seen that pin before too and guessed it was fudge, not brownies Glad you could confirm. I always thought that you were supposed to gift the fudge *inside* the cookie cutter as part of the gift, because once decorated I can’t imagine they would ever pop out cleanly. Plus it’s cute to get a new cookie cutter. Thanks for sharing at Retro Re-pin this week. I went ahead and pinned this to our party board, but in the future we ask you to link up a link to one of you pinterest pins. That way we can show your pin some love (and a boost in reach) by re-pinning rather than making a new pin. (Pinterest shows extra love to a re-pin.) Have a great week!

Gah! Sorry, I completely forgot to link my pin instead of my post. I’ll remember that next time. Thanks for the pin!

Thanks for showing us the evidence. The original photo looks so cute, but I think anyone who works with cookie cutters knows that they are never as easy to use as they seem. I definitely wouldn’t try to bake them, but thanks for showing it.
Thanks for stopping by the Retro Re-Pin Party. I know another host already said this, but I showed up here too.

I made it work! I put aluminum foil wrapped around the bottom and flattened any wrinkles out of the bottom. Some leaked a little where I didn’t wrap it tightly, but I easily scraped that off with a knife. I took pics but not sure how to share.

Lorinda, that’s awesome! Do you run a blog?

Hello! I actually tried this pin earlier today and it actual worked pretty well for me. I put the cutters on the sheet parchment paper underneath and also buttered the cookie cutters. One broke trying to get it out though. I will admit you have to slowly push them out and i found using my fingers worked best. So this pin may be false but you can still kind of make it work