A few quick and cheap changes make such a huge difference in how I feel cooking in my new, organized kitchen!

Over the years I have discovered one thing: I HATE cluttered counters. I could never figure out what my problem was with the kitchens we had…but that’s it. I need to have access to my counter space.

Now, in all honesty, my kitchen isn’t that bad. But going in there irritated me. Keeping it clean was a pain, especially after baking (I’m very messy). There were constantly dishes, rags, gardening pots (I don’t even know why), utensils, and small appliances littering my counter tops.

A couple weeks ago, I finally had it…and I took to Ikea.

There were two things I hoped to accomplish with my kitchen project:

The logical decision was to “think vertically.” Which made sense. I love industrial kitchens. Nicely decorated kitchens are pretty, but I need function. Which is what I went with.

If you don’t have an Ikea around, you can find similar products elsewhere, or the exact products on Amazon (though for a higher price). Here’s what I used! 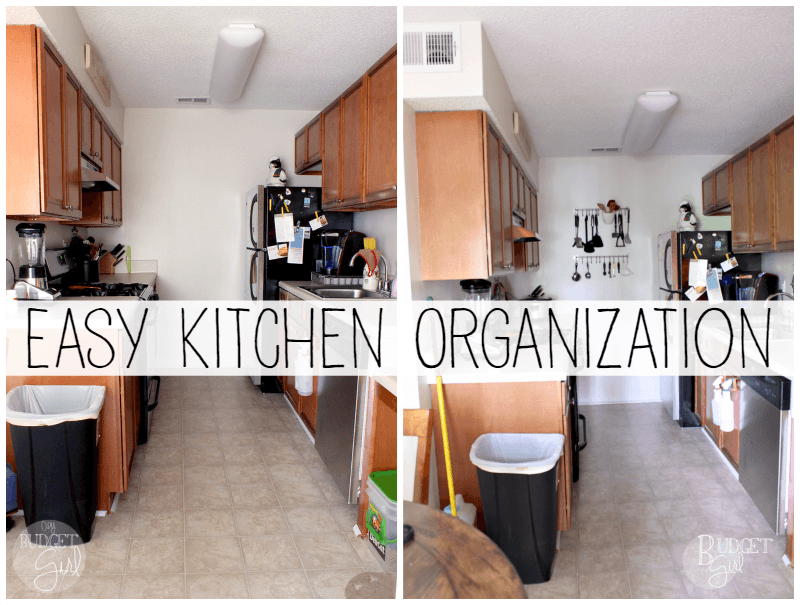 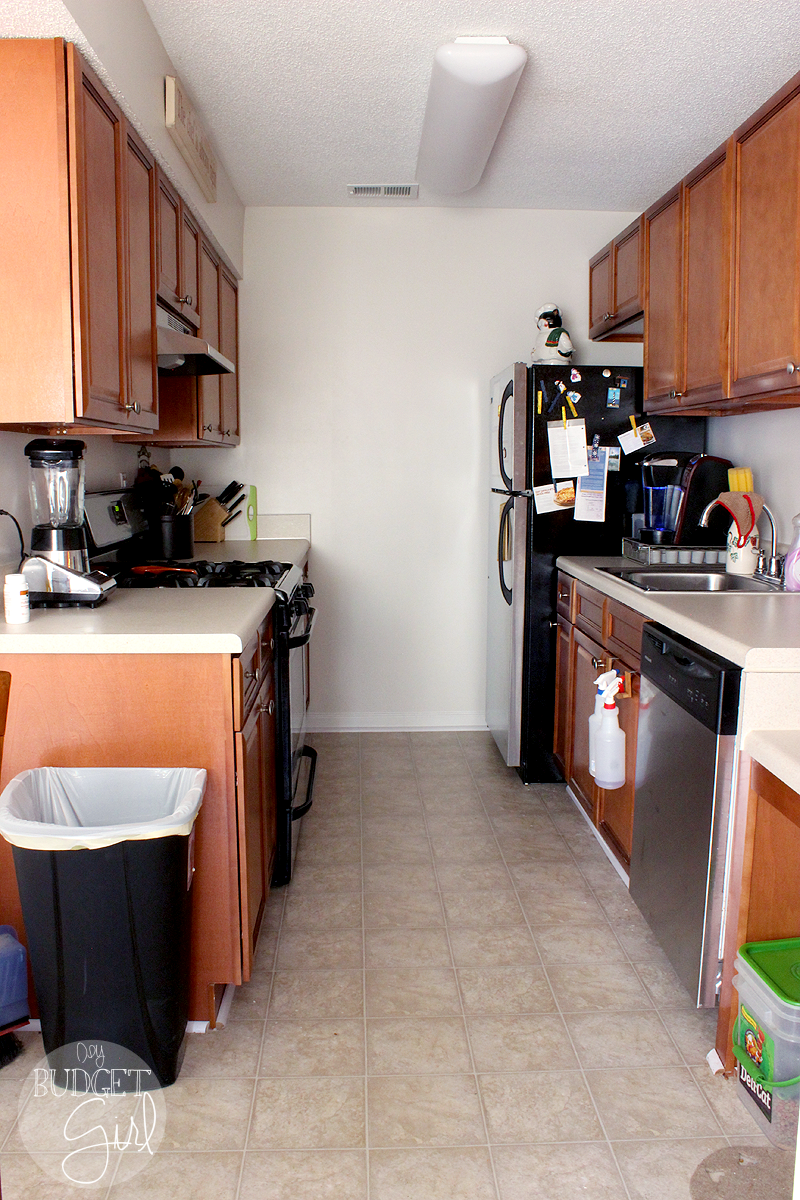 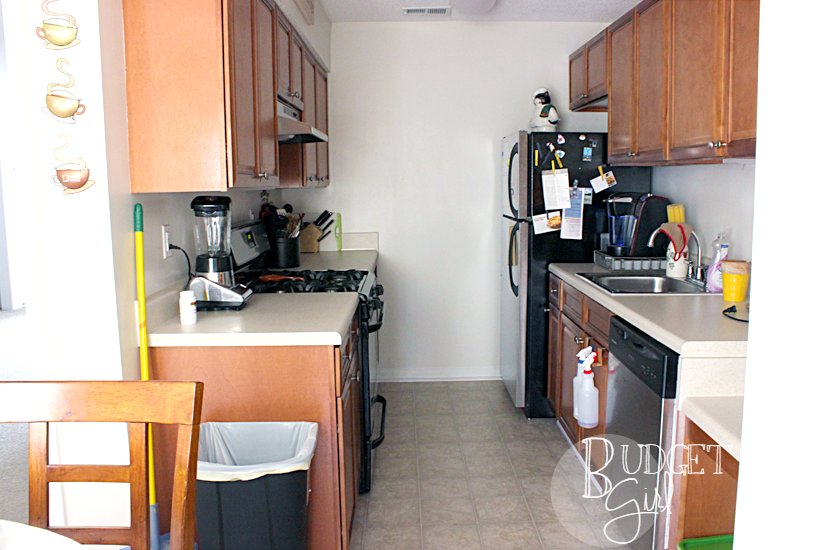 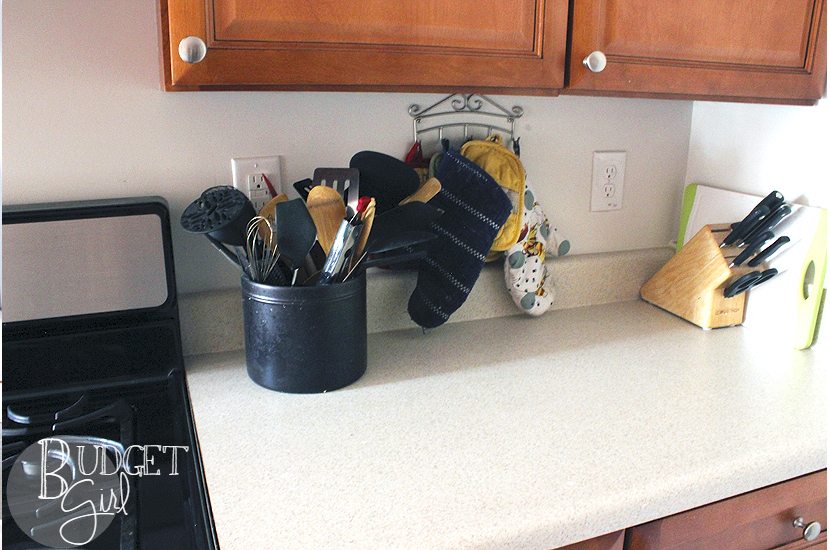 I hated this utensil holder. It constantly had grime on it and I couldn’t get it off. Trust me, I tried. Plus pulling out utensils was a huge pain. They would get caught on each other, so when I pulled out one, two or three others came out with it. 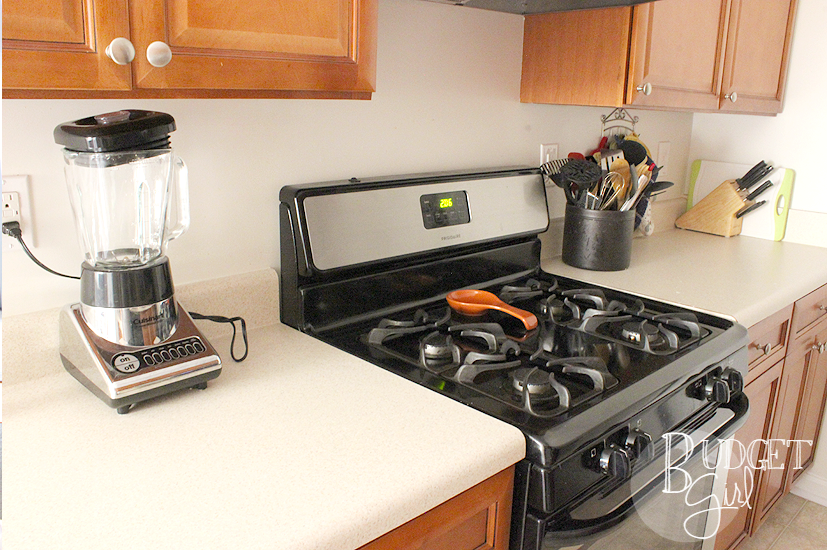 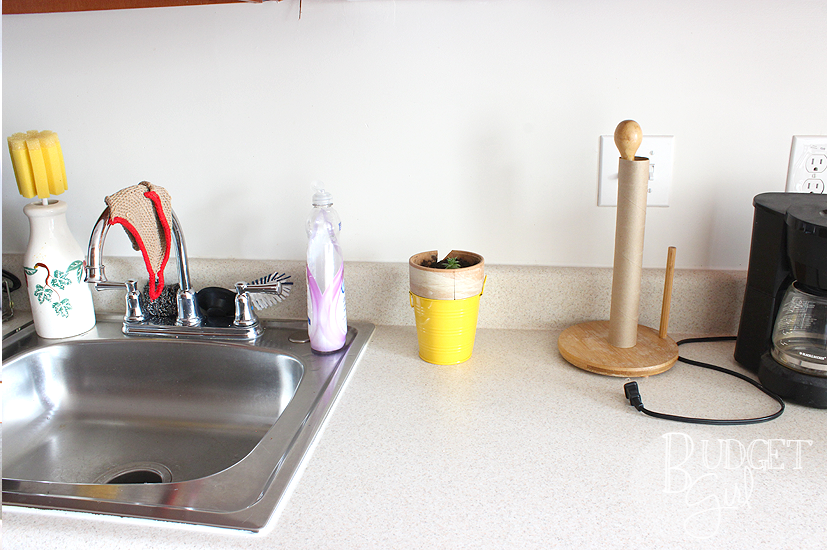 I forgot to buy paper towels, apparently. 😛 I hated everything about this set up. 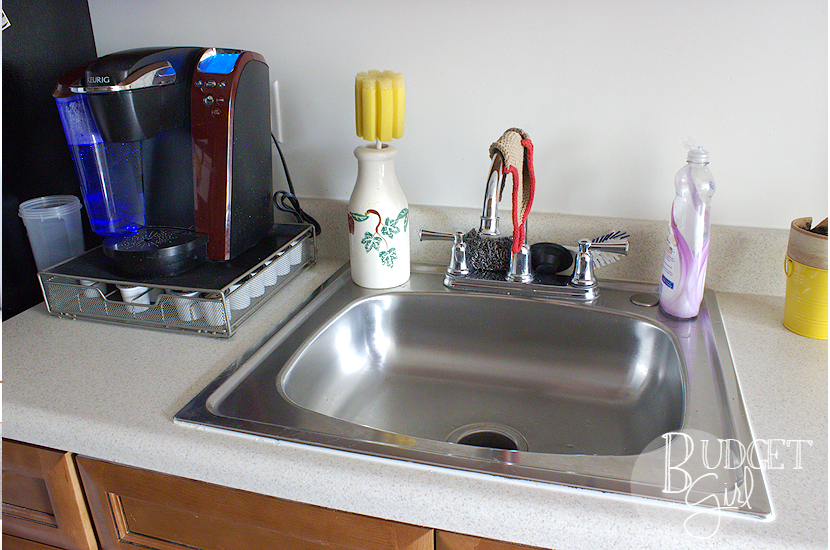 The drain stopper would fall down into the drain every once in a while…upside-down. It’s so difficult to get an upside-down stopped out of the drain. -_- 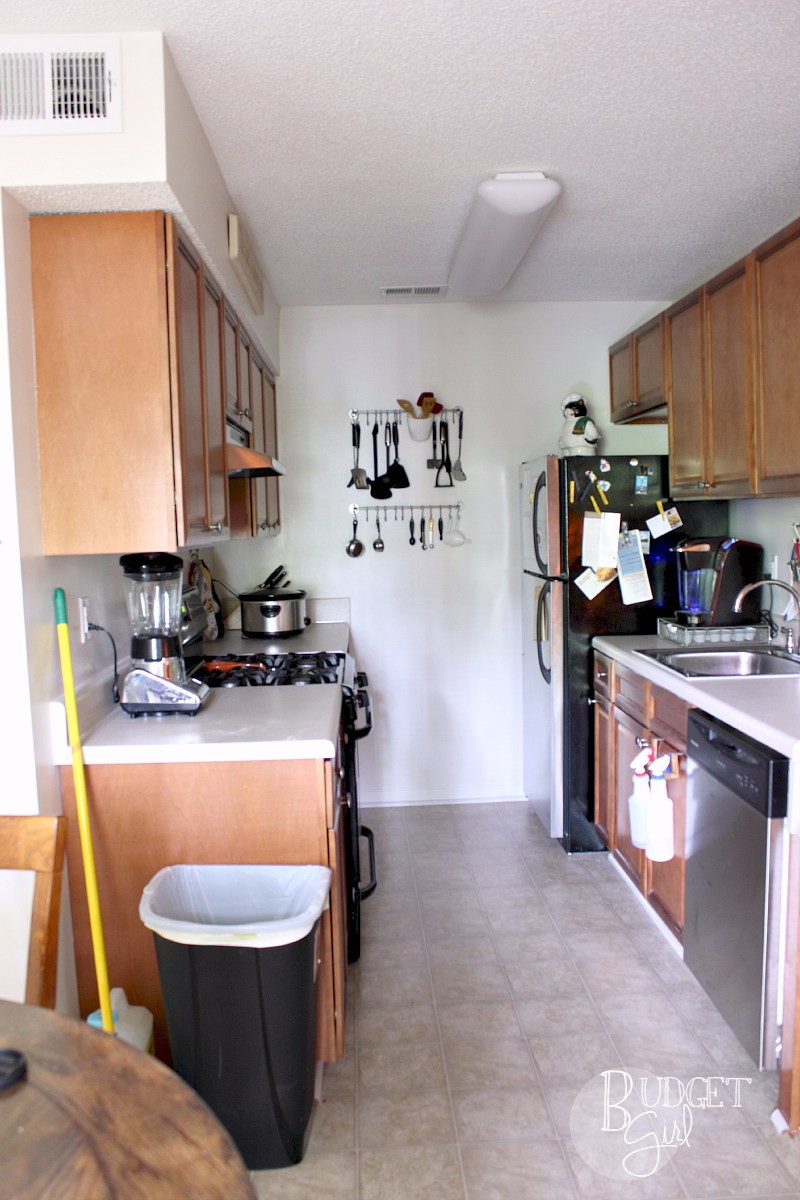 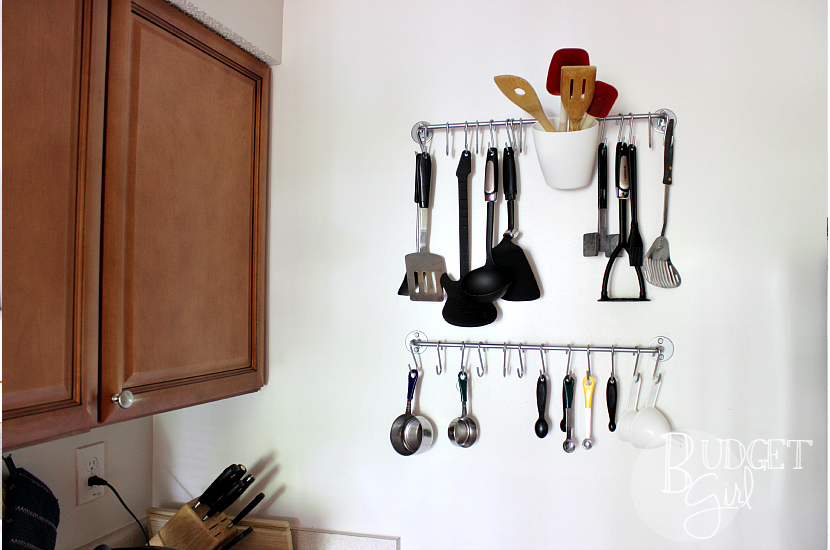 A lot of my measuring cups/spoons are in the dishwasher, but this is basically it. SO much nicer! 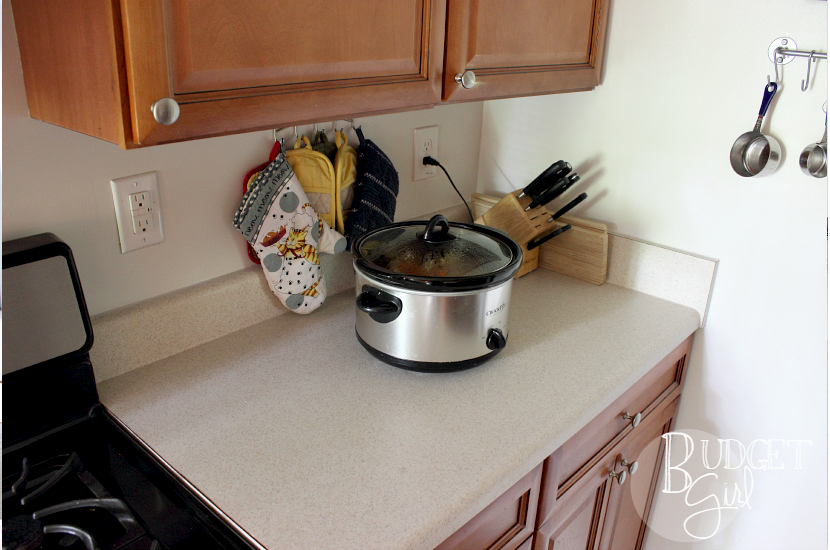 I was making dinner when I took these pictures, otherwise the crock pot isn’t there. But it’s nice to get out the crock pot and still have plenty of space. 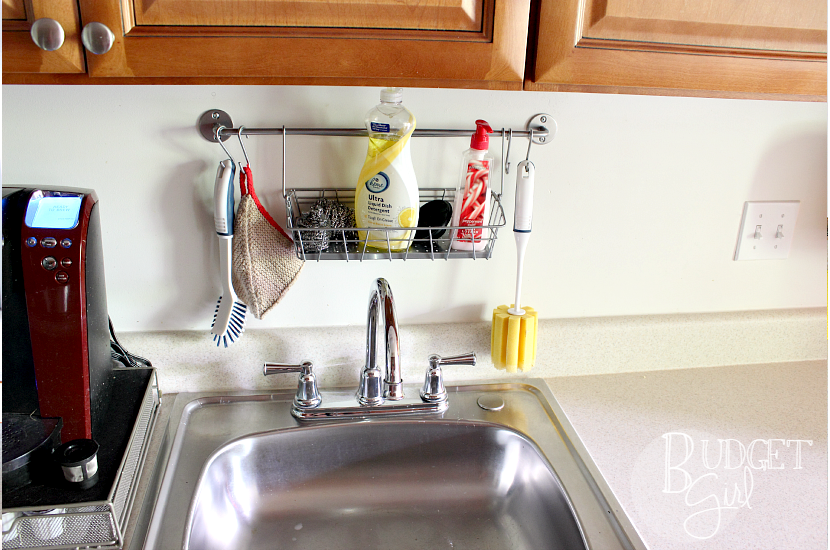 This made a HUGE difference! My sink isn’t scummy anymore now that it’s easy to wipe down and I LOVE it! 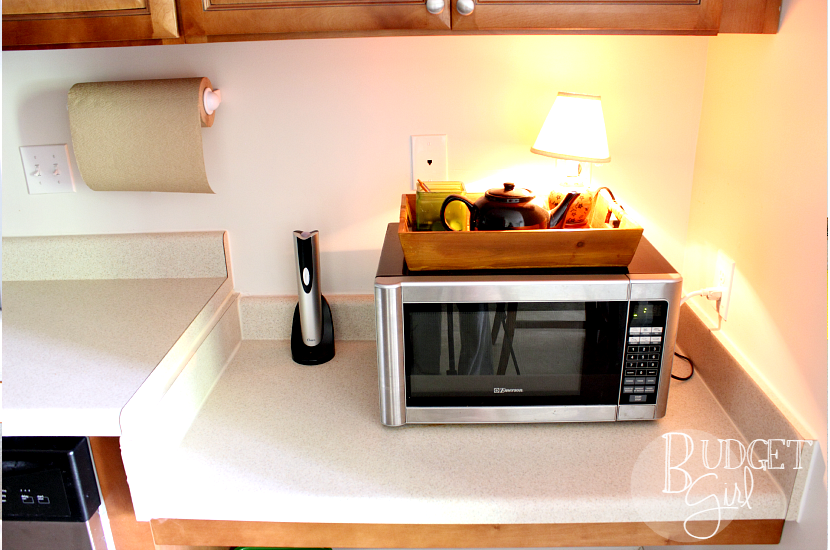 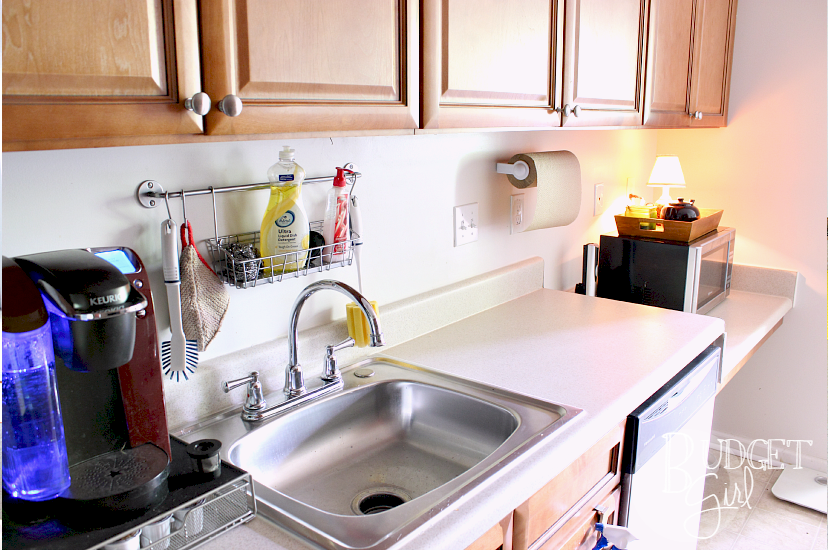 New paper towel holder! I love that it doesn’t draw attention to itself.

The one thing that surprised me was how much I LOVE that towel holder (which I got off Amazon–it’s the only thing I needed that wasn’t sold at Ikea). I was pretty skeptical when I saw the photos, but it works really well.

There isn’t anything special about it. What you see in the photo is what you get (plus a couple screws). The ends have just enough give that you can put paper towels on it (and, yes, jumbo towels work fine). But it holds so well that I have never worried about the towels falling out if I put pressure on them.

Also, it has a bit of resistance. Not so much that you can’t unroll towels, but just enough that if you go for one towel, you won’t wind up pulling out more by mistake. The resistance is also helpful if you need to pull off a towel with only one hand. And if you have young kids who like to play with the paper towel roll, I recommend one of these. It won’t stop them if they manage to get hold of it, but it will certainly slow them down. 😛

And if you need to take the roll to another part of the house, removing it from the holder is easy.

Everything else is as expected! I got the Bygel container because some of my utensils don’t have holes to hang them from. I was really worried they would be too large and fall out of the container (it’s very light and, as you can see, it leans). So far, no problem! I think I’ll move it to the bottom rail, though.

This whole project cost me less than $20. And, actually, I didn’t feel like going to Ikea, so I had it all shipped. It’s only about 15 miles from us, though, so shipping was cheap. (I hate going to Atlanta’s Ikea. It’s always so crowded and it’s a pain getting in and out.)

I think the biggest help, though, has been the area above my sink. Keeping the soap and dish brushes behind the faucet was such a mess. I wound up with soap scum and other nastiness back there and my sink always looked awful. Now it’s so easy to keep clean.

In fact, my whole kitchen is easier to keep clean. It seems as though not having all that crap on my counters makes it much easier to spot the clutter and get it taken care of. When I’m using my crock pot, I still have plenty of useful counter space. When I get out my blender for baking, I don’t have to worry about accidentally splattering all of my utensils with batter (that happened A LOT. Mostly because I’m careless when I bake). If there’s some splatter, I can just wipe down the counter. Easy.

Now if only I could keep my stove clean…. 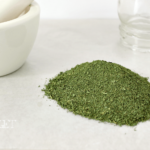 Looks great, Chelsey! I have the same issue with my utensils getting caught on each other in my utensil crock. I have my knives on a magnetic strip but I love your idea of hanging spoons on hooks!

I’ve been wanting a magnetic knife strip, but Zach is afraid the knives will either fall off or not come down easily enough. What’s your experience been like?

Some of the ones you can buy at discount stores like Target are kind of sub-standard, but we got a good one at a restaurant supply store that wasn’t expensive and holds the knives very well. We’ve been using a magnetic strip for 7 or 8 years and have never had a mishap. Now, we do keep our sharpening steel on the strip and it has fallen a couple of times when I bumped it while trying to put a knife away….but we’ve never had a knife fall, and we don’t have any problem taking them down either.

Nice! I definitely want to get one. The knife block just isn’t working for me anymore. -_- Thanks!

What great ideas, I especially like the rail over kitchen sink.. stop the build up of scum and smelly washers. #wineddown

That has definitely been my favorite addition, Natalie!

Thanks for sharing! I need to do some of these things. One thing I did was to have my husband build me a kitchen cart. It’s quite handy for storing the crockpots, the extra coffee, and all our paraphanalia from our five pets. That helps a lot, but the counters still get so messy if I don’t keep up on them.

I really want a cart or an island, but my kitchen just isn’t big enough. -_- They’re so nice, though!