I know, I’m a horrible person for making you think of vodka on a Monday morning.

Zach’s birthday was Saturday, so his sister and her boyfriend came over. Our plan was to relax with some drinks and play a lot of video games. Which we did. Maybe too much.

As a treat, I made us these fruit vodka mixed drinks. They were quite good and far less sugary than Skittle vodka (which is also delicious, but then I hate myself because it’s so much sugar). 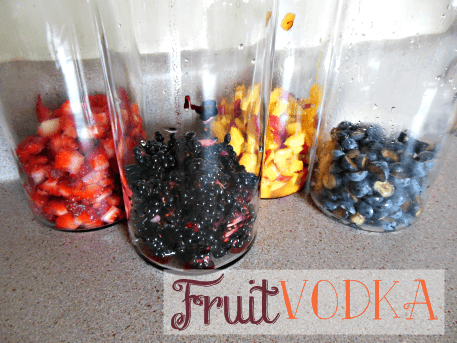 Step 01: Dice your fruit into small pieces. This is partially to get it back out of the bottle, after the vodka has caused it t swell a little, and partially because it will make the process go faster if there is less surface area. Realizing what fruit I listed, I will not do blackberry again. It doesn’t retain any of the fruity flavor because blackberries absorb too much. I debated in kiwi, but I don’t think my SIL likes kiwi. Nectarine was the best and strawberries were second best. The blueberry was merely OK, but that’s because the fruit hadn’t completely ripened when I cut it. Let your fruit ripen if it hasn’t already.

Anyway, after you’ve diced your fruit, put it in your containers.

Step 02: Fill each bottle with vodka. I only made it about halfway up the bottle with 1.75 liters.

Step 03: Let the vodka sit somewhere for about 2 days. Shake it periodically. Once you’re confident that the vodka has extracted enough of the flavor (I decided this by tasting), begin straining the fruit out. I used a regular, metal strainer over a bowl to get the fruit out.

If you have any problems getting the fruit to come out of the bottle, shake as much of the vodka out as you can and then run tap water into the bottle and continue shaking it into the sink or something (not into the vodka). The pressure of the water leaving the bottle should cause the fruit to pop out, as well. Repeat the process until all of the fruit is gone.

Step 04: Use a fine, mesh strainer (I used a reusable coffee filter within a funnel) to strain out the finer stuff (like seeds).

Step 05: Once you’re done straining, add the lemon-lime soda to the bottle.

If you have drinks that are similar in color, I recommend a label you can tape on or a dry erase marker.

This is delicious, but stronger than you would think, so take it easy.

In case you’re wondering, it doesn’t matter what kind of vodka you use. I never experiment with expensive kinds, so I just grabbed an $11 bottle of some generic thing. I think it was called Burton’s? I’d never heard of it before. Also, vodka has gone way up in price. I remember when I was in college and you could get a 1.75 liter bottle of Popov for $8 (yes, Popov–I didn’t have the money for anything decent in college :P). Now it’s twice that. Also, I think remembering “the good old days” when booze was cheaper is a sign that you’re getting old, but I’ll need to double-check that with some teenagers.

Experiment with different fruits and let me know what worked for you! 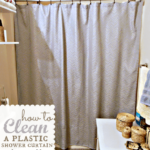 How to Clean a Plastic Shower Curtain

That looks very good. Which flavor did you like the best?

My favorite was the nectarine! My sister-in-law liked the strawberry best, though.

Picture 01 to 07 are missing…. Not sure if my previous post was actually posted so sorry if you get this twice 🙂