Home Blogging Getting Great Photos with a Point and Shoot, Part 3

Getting Great Photos with a Point and Shoot, Part 3

Last day of point and shoot photo tips! Today it’s only one, but it’s a long one. (Note: This post might contain affiliate links. If you’d like to know more about my affiliations, please read my Disclosure Statement.) 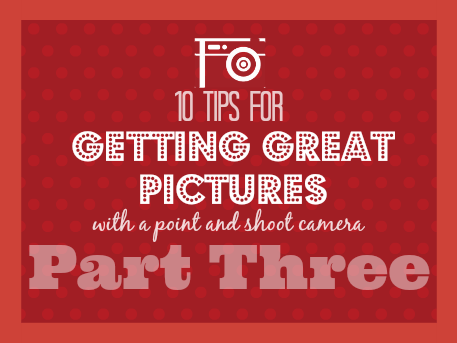 I know a lot of people hate to edit their pictures. Some people think editing is the same as lying. Others think you have to have expensive Photoshop programs to do it. And then others think every photo they take is perfection. (Not to burst your bubble, but perfection is rare, if it exists at all.)

All of those things are wrong.

When I say the word “edit,” I don’t mean the airbrushing magazines do to their models. I mean adding a little zing to your photos. I mean one corner of your photo is a little dark, so let’s do a little brightening. Or Batman is blending in with that black background just a little too well, so let’s sharpen him slightly and make him pop.

It’s easier to catch mistakes on a computer than it is through a lens. Editing is just a way of correction. It’s also a great way to help draw the viewers eye to a certain point by fading (or even removing) something that’s too eye-catching.

Editing to brighten a photo, though, is especially important for a point and shoot camera since they have fewer light and lens settings.

Some FREE editing programs are:

Some very not free programs are LightRoom, Photoshop, and Paint Shop Pro. They are wonderful, but they are all extremely expensive. It is certainly possible to pirate and crack them, but I would rather not compromise my computer like that.

For the sake of this post, none of the Batman pictures in the previous posts were edited. Today, though, let me show you what happens with a little fixing and enhancing.

I went from this: 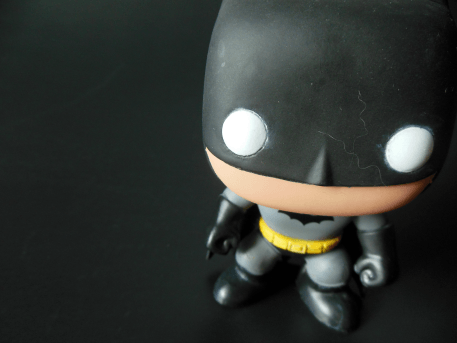 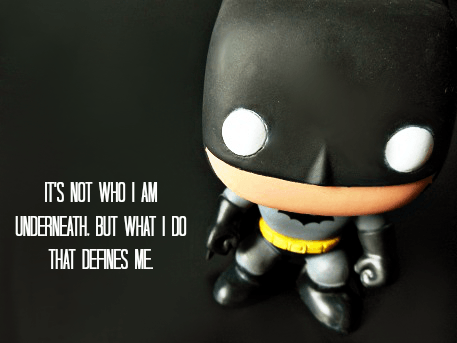 If you take a bunch of pictures and none turn out the way you want, editing is a good thing. Here, I blurred out the piece of fuzz (which you can see if you look closely because I did a sloppy job). I sharpened the picture so Batman would stand out a little more, and I brightened and warmed it using my tutorial on how to edit lighting. Then I put it back in PicMonkey and added the text, using the font “Tall Dark and Handsome.” 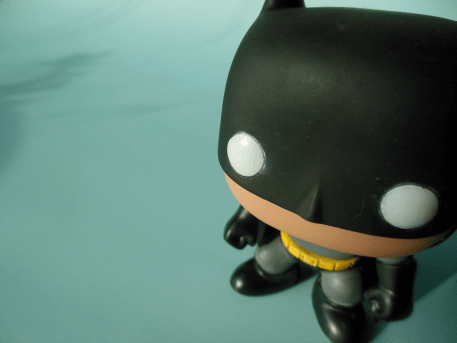 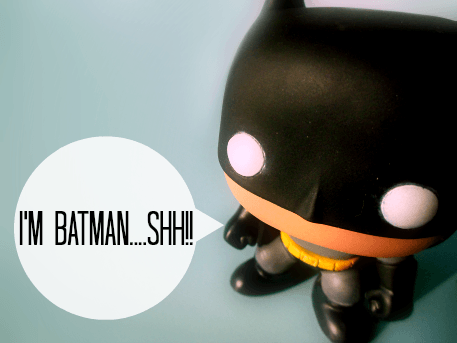 With this one, I used the Smudge tool in Gimp to remove the shadow on the left-hand side. That’s the great thing about a solid color background…a simple smudge tool can fix just about anything. I then took it back to PicMonkey, increased the contrast, used the Focus Blur filter, added a bubble overlay, and topped it with text. 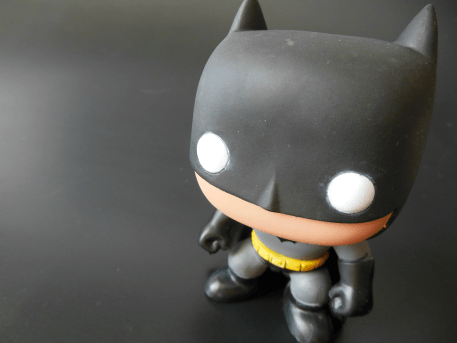 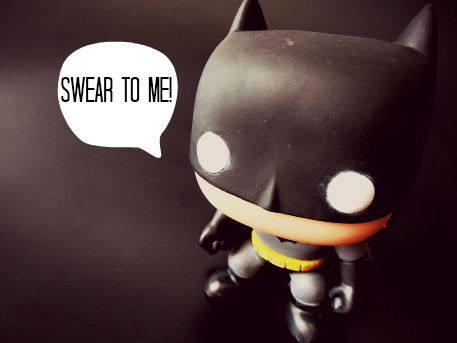 The original was actually pretty good and I could have gotten away without editing it. But I thought it would look cute if I made a few little tweaks. This, like the ones above, was done using both PicMonkey and Gimp. I probably could have just stuck with PicMonkey and gotten something just as nice, though. In PicMonkey, I used “Unsharp Mask” and I increased the Clarity and Sharpness until I was happy (don’t sharpen too much or you’ll wind up with blurry halos around your subject). I also lowered the brightness and increased the contrast. I then went into Gimp and used the tutorial referenced above (which I really didn’t need to do). I took it back to PicMonkey, added a filter called “Dusk,” and then added a bubble overlay with the text. 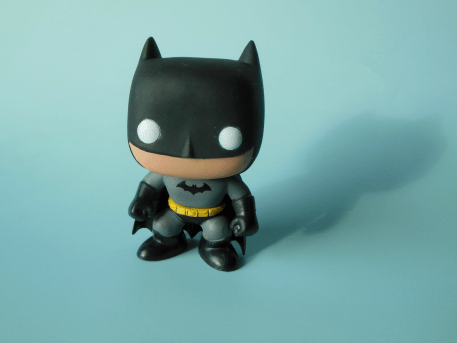 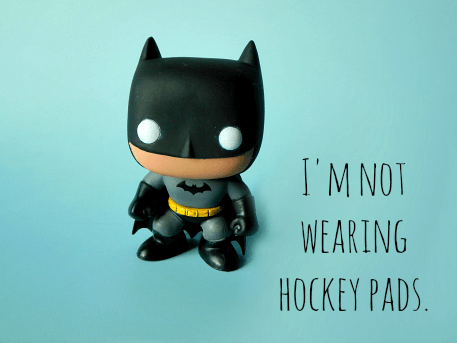 This is the one that was taken with natural light and had a huge shadow behind it. Shadows aren’t terrible, but getting rid of them can make a picture look much better. To fix it, I used the Smudge tool in Gimp, which got rid of the majority of the shadow. Then I moved the picture to PicMonkey where I increased the Clarity and Sharpness. I used a “Boost” filter (set really low) and then added text.

One last editing tip: once you think the edits look good, pull it back a little. Trust me. It’s better to under-edit than over-edit. We tend to get wrapped up in what the picture looked like beforehand. The edits can be so subtle sometimes that we don’t notice how terrible they look until it’s too late. This happens to me a lot, but since I’ve been pulling it back a peg it’s gotten much better.

I am definitely no professional and my pictures are not perfect. But they’re certainly better than they could have been!

There are certainly more things you should know about how to take great photos with your point and shoot, but I find these ones to be the most helpful and hopefully you will as well.

Some of you may be wondering why you should bother trying to take great pictures. Surely sub-par pictures work, too, right? I mean, they still give an accurate representation of what the project looked like, don’t they? Well, they do. But here’s the thing…your readers prefer nice pictures. My traffic was at 130 hits a day at its highest back in August (and that was on a really good day…most days it was more like 70-90). Around September, I started trying REALLY hard to get great pictures. I did hardcore editing, I started adding text to my featured images (which are the images that show up on Pinterest, Facebook, Tumblr, and Google+). By doing that (as well as some other things), my traffic went from 130 to 400 in about 2-3 months. That’s ridiculous to me. The reason? My stuff got pinned and reblogged more often because my pictures were more attractive. No one wants to pin ugly pictures.

I know they say it’s not supposed to be all about the traffic and you should blog for you…but, let’s face it, if we didn’t want anyone to read our posts, we would have made our blogs private. I love blogging and, to an extent, I do blog for myself. But I do it for you guys, as well. Meeting people who share my interests is an extremely rewarding part of blogging. So I want to reach as many people as I can. I imagine it’s the same for a majority of other bloggers, as well.

So remember: practice makes perfect, but it’s not going to do you any good if you’re not learning from your mistakes, experimenting with your camera, and taking advantage of your environment!

And if you ever see a font on my blog that you love but can’t find, let me know and I’ll be happy to give you the name. (Chances are, it’s from Dafont. :P)

NOTE: The rules in this series can also apply to a DSLR. As I said, you can’t just buy an expensive camera and then expect your photos to magically transform.

Why You Shouldn’t Add Links to Blog Comments

This series is so helpful! Thank you for the free editing link!

Love love love this advice, thank you so much. Some tips I knew and have tried with varying degrees of success, some are new and I can’t wait to try.

Julie, I’m so glad you found these posts helpful! And I would love to know if using these methods makes you feel any better about your photography. 🙂

Thanks for stopping by!!

I almost always edit my pictures, although I’m usually only making tiny adjustments to the lighting or sharpness. And thanks for telling me about pictaculous – it’s now bookmarked!

I usually try to do just lighting and sharpness, as well (since major editing takes so long and I’m incredibly lazy), though it’s nice to know that I can do major editing if I really screwed up. 😛 And thanks! Pictaculous makes life so much easier. 😀

I loved this series. I fancy myself a good photographer, but when it comes to food photography for my blog, I feel woefully inadequate. Thanks for the tips. Linking up from The Blogging Bunch Group – just joined.