Home Blogging Getting Great Pictures with a Point and Shoot, Part 2

Today is the second day of my photography mini series. We’ll be discussing tips 4-9, mostly dealing with how to arrange your subject.

Reminder: these tips are for a point and shoot camera. However, many of them apply to SLRs, as well. Enjoy! (Note: This post might contain affiliate links. If you’d like to know more about my affiliations, please read my Disclosure Statement.) 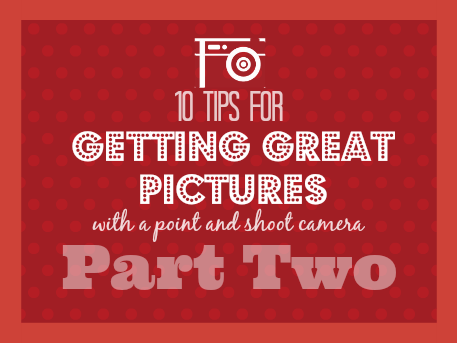 4. Don’t be afraid to get up close and personal.

The weirdest photography experience I’ve had was with me on the other side of the camera. Zach and I were getting our engagement pictures done and it was the first time I’d ever had a REAL professional photograph me. He got really close. I mean uncomfortably, get-out-of-my-bubble close. I’m introverted and I like my space, so this didn’t make me happy…but then I saw the pictures.

They were fantastic. The close-ups were so cool.

As they so often are.

Under certain conditions, getting the whole object is a pain (sometimes impossible) and the effort to do so makes the photo just look…off. A close-up can fix this. (This is especially true with furniture! The best photo I took of a piece of furniture was the close-up in this post)

It’s also nice because if you’re not a very creative person, a well-positioned close-up can add a bit of artsy-ness to your photos without any extra effort on your part.

Some of my best photos have been taken inches away from the subject: 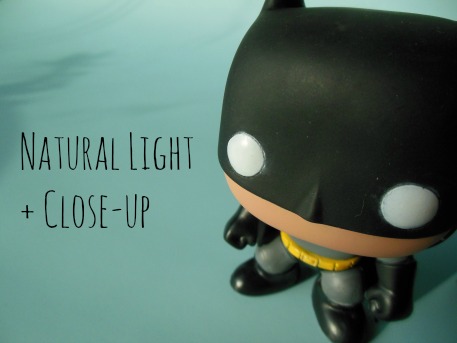 Also, that shadow in the background wasn’t supposed to be there…it came from my plant, because I forgot to move it (but I can edit it out). Which brings me to my next point!

5. Remove everything from your space.

Here’s a food photographer fact-of-life that doesn’t seem obvious until someone says it out loud: the photos are staged. Staging is not the same as faking. Staging just means that the photographer set it up to look more appealing. I’m a sloppy server. When I make lasagna, it gets slapped on to plates in a blob. But when I’m photographing it? You can bet I’m giving it at least an hour to cool and then cutting it into the perfect size and setting it neatly upon a well-chosen plate (not the ones with the chips in them, if I can avoid it). My food doesn’t just naturally and effortlessly come out pretty, I make it that way when I know I’m going to be taking pictures of it. My table top is filled with clutter 24/7, but you’d never know it to look at my photos because I (usually) move everything so they don’t wind up in the pictures. (A good example of this is “Behind the Scenes: What You Don’t See in All Those Pinterest Perfect Pictures.”)

Knowing how and when to stage a scene is incredibly important. You want people to see the object you’re featuring, in all its glory, which is difficult when you have a bunch of crap sitting in the way. Just yesterday I was looking at pictures of a house that was for sale…and I have no idea what the house looked like because I couldn’t see past the owners’ clutter. A house that’s staged is a house that sells, just like a meal that looks nice is more likely to convince people to try the recipe. I know a few of you are probably thinking, “Well that’s lying! And lying is wrong.” If we follow that logic, then putting on make-up is lying, too, because that’s not what you face actually looks like. You either want people to like your blog or you don’t…and nice, clear photos will achieve that faster than dark, blurry, yellow-tinted ones.

The same is true with these Batman pictures. I had things out that I was in the middle of using and I didn’t feel like putting them back…so I moved them off to the side (though obviously not far enough). 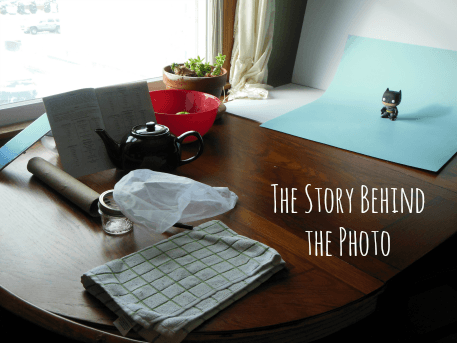 More people do this than you realize! And for good reason. The best way to get your photo’s subject to stand out is to get rid of anything that would draw attention away from it. We live in an apartment, as well, so I don’t have a designated photo area. The best I can do is hide the mess. 😛 (Also, this picture should give you a good idea of why I didn’t feel like closing my curtains for a better light filter. The table is so big that I have to move it in order to do that, so it’s something I avoid when I feel like I can get away with it.)

6. If possible, use a background.

I’ve been doing this more and more often, and I find that it’s easier to do with non-food items…but it has definitely made my photos better! You can get all kinds of stuff, too. You know all of those blogs that seem to have a million different weathered kitchen tables? They actually don’t! You can get wallpapers that look like weathered wood or brick or basically anything you like (which blew my mind). They’re still a little pricey for me, though, so I just use poster board. The blue one you keep seeing in this post was $0.79 at Kroger. I have a bunch of other colors, as well, all just as cheap. As you can see above, I just clip the poster board to a piece of foam board and let it curve naturally to create a crease-free background.

If you can, stock up on different colors (and patterns, if you want) so you can choose which color is the most appropriate. If I had to pick a couple, though, light blue and white work with just about everything.

Batman also looks pretty good on black poster board. (Like that’s a surprise.) 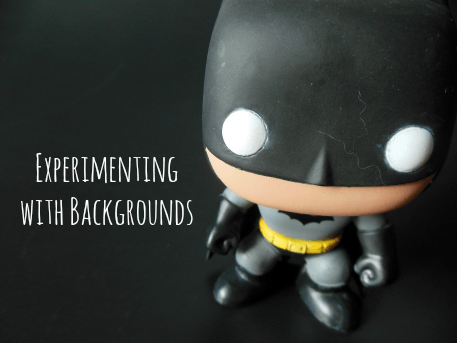 Now I know what you’re asking: “Why is there fuzz on Batman’s face?”

7. Pay attention to what you’re doing and check your pictures!

So earlier I showed you a picture of Batman where the shadow of my plant was visible. If I had been paying attention before I took the picture, I would have noticed that.

On countless occasions, I’ve had to redo my pictures because the cat crept up behind me and stuck his tail in the frame…and I was too busy being oblivious to notice. 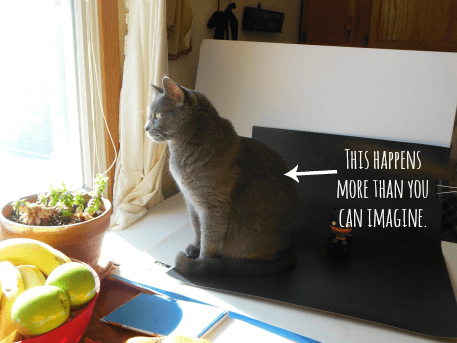 This is especially important with food pictures, because once you eat it, it’s gone and you can’t do a re-shoot (not unless you want to cook that meal all over again!). Photographers cannot afford to be oblivious. If you want to get into photography, but you’re not very good at nit-picking small, seemingly silly details, you’ll want to take some time to teach yourself how to be good at it. It is hugely important, even if you’re just a hobby photographer.

The natural light close-up with the blue background? That photo was my second take. Here was my first: 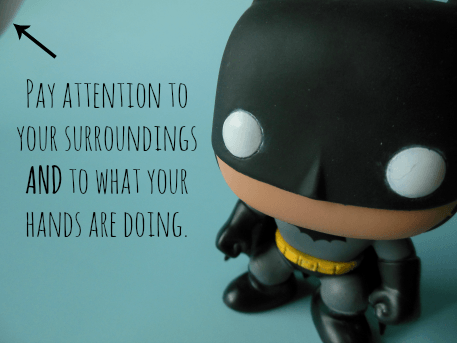 That blurry thing the arrow is pointing to is my finger.

I didn’t notice that until I got into editing. Fortunately, Batman is not edible so he was available for a re-shoot. (Though, in reality, I could have edited that out since the background is a solid color. If it had been a textured background, though, re-shooting would have been an absolute requirement.)

So I set everything back up and wound up doing this: 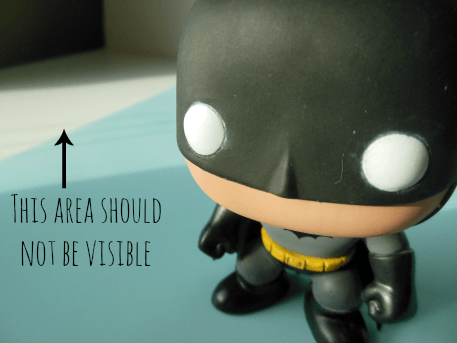 That’s actually a dramatization of what happened. Thing is, I almost did that…and I would have had to do ANOTHER re-shoot if I had. But I was paying attention this time, so I took my finger off the button and I re-positioned Batman. Sometimes mistakes just happen, though. So once you take a picture, take a look at it (and at your set-up, because sometimes it’s hard to see everything on those tiny screens). If something seems off, fix it. If I had looked at Batman after the picture with the black background was taken, I could have simply removed the fuzz and taken another picture.

Plus, when you take a bunch of pictures the first time around, you won’t have to drag everything back out when you realize you messed up. So….

If I had written this list in order of importance, this would have been in the second or third slot on Monday’s post. For the sake of not re-posting the same pictures over and over again, I just wrote it in a way that made numerical sense.

I can’t tell you the number of times I was in a hurry (admittedly, it was mostly because I was hungry) and I only took maybe 5 or 6 pictures (yeah, take a few dozen). One of the problems is that the screen on my camera is too small to tell when it’s just slightly too blurry. In the camera, the pictures looked pristine. When I got them into editing, though, they were all blurry. Every single one of them. And it was a few days after I took the pictures that I tried editing them, so the food was long gone by then. I could have prevented this better if I had taken more pictures.

Also, take a picture of the same scene, but at different angles and from different distances. You never know what works until you experiment with it. (I only took about 30 pictures for this post…it’s easier to get away with fewer pictures when it’s a scene you can easily dismantle and recreate.)

The biggest reason I ever need to redo photos is because my body can’t seem to stay still. I had to redo the photos for my nightstand organization post four times because they kept turning out blurry. A tripod would have helped that.

I don’t have a huge tripod, but I would like one! For right now, I have a little three-inch thing that attaches to my camera. It’s useful sometimes (even just holding it can help me steady my camera better), but it’s not great. A real tripod will make your photos turn out much more crisp.

The final part of this series is available here.

Getting Great Photos with a Point and Shoot, Part 3

Great advice 🙂 And you have such a fun way or writing about it that definitely makes people relate (to the mistakes 😛 ).