Home Cleaning & Organization How to Build Floating Shelves for Under $20

How to Build Floating Shelves for Under $20

Shelves are expensive! Here’s a tutorial on how to build floating shelves for under $20 in only three steps!

It’s been a while since I actually finished a project, hasn’t it?

Back in January, I went on an “organizing” kick and I thought it would be really cool to get some cubbie cubes and turn them into nightstands. Something like these bookshelves from Ana White (our bed sits high, so it would work).

And then, for many reasons, that project got scrapped. Which left me with a few planks of wood I had no idea what to do with.

I have, however, had a problem with decorative space, though. Most of the space we use in our apartment is used for storage and organization. I have quite a few knick knacks that had no place in our apartment. Most of them I sat on top of the bookshelves, which would have looked much nicer if those shelves weren’t also filled with books. 😛 Adding little sculptures and whatnot made it look very cluttered.

So while Zach was at a conference in Chicago last month, I decided to reorganize my living room (which also included organizing my books by size. It was a long process, but so worth it). I also cleaned out the work room, which held all the wood I had been planning to use on nightstands. It was cheap wood, I got three planks that cost me $1.90 each (at Home Depot). Still, I didn’t want to throw it out.

And then I remembered the huge blank wall in my hallway and it hit me: shelves. I could turn the planks of wood into floating shelves. Which would also solve the problem of what to do with my knick knacks.

My usual MO is to wait until Zach gets home because he is way better at hanging things than I am. But he was in Chicago and I wanted this done quickly, while I was still in the mood to fuss with it. Plus, wouldn’t he be so thrilled if I could get these shelves hung myself? Yeah, he totally would. 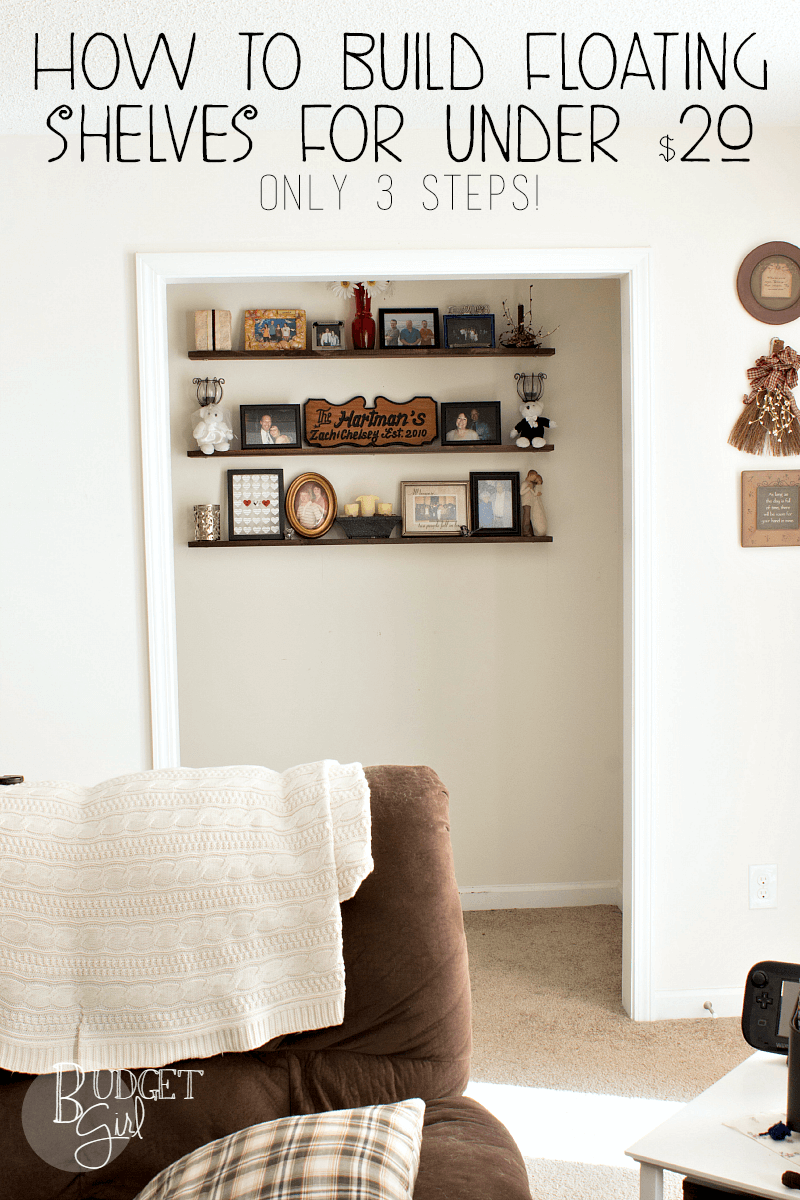 How to Build Floating Shelves for Under $20

Step 01: All I did was stain the wood according to the directions on the can. I only used one coat, but if I did this again I would go with two.

I wanted the full length of the wood, so no cutting or anything was involved. Since these aren’t holding anything heavy and they won’t see much wear, I didn’t bother sealing the stain.

I didn’t sand them because I liked the rough look. If you want yours to be nice and smooth, you’ll want to sand a bit.

Step 02: Once the stain was completely dry, I measured 2.5 inches in from each edge. I marked where I wanted the screw to go and I screwed the corner brace into the bottom of the wood.

I also put a corner brace in the middle of each plank of wood to reinforce them (except for one, because I had 8 braces and not 9…and I wasn’t buying another 4-pack just for one brace. That shelf only has very light things on it).

If you want, you can also put another screw through the back of the wood, but I didn’t see any reason to. 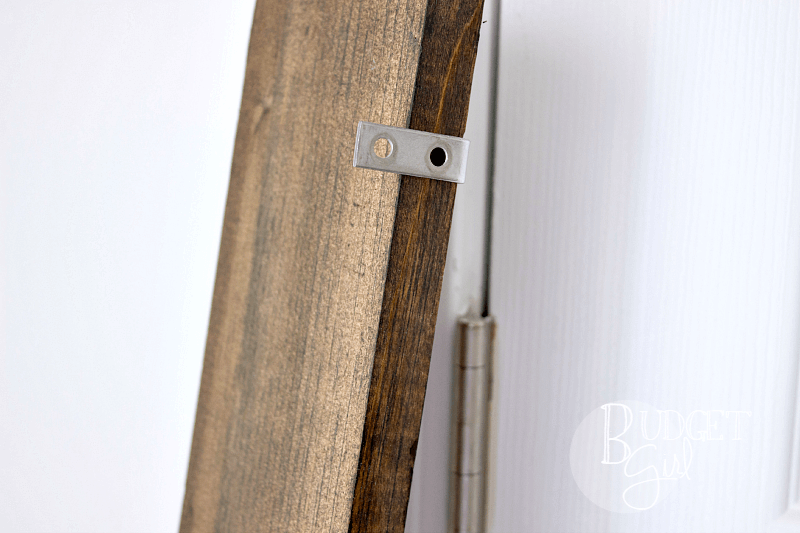 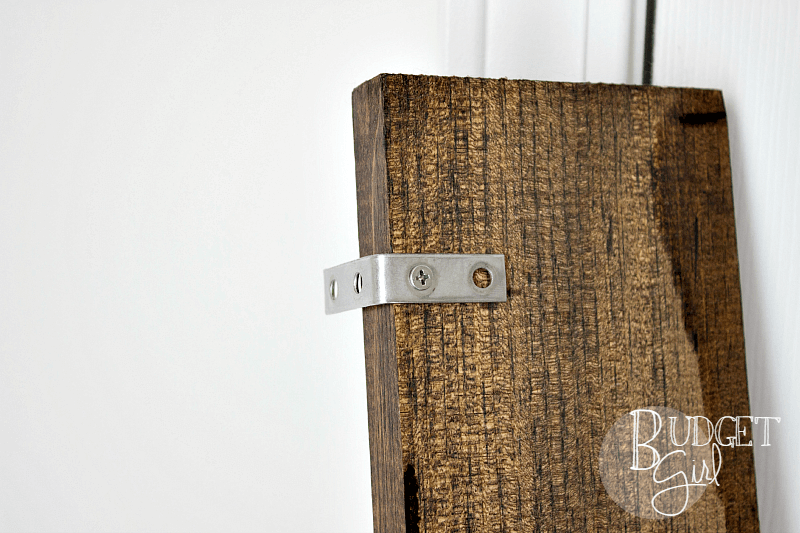 (I spilled a little stain on the bottom of this, which is where the weird coloring comes from. That is also why the part you’re looking at is the bottom. 😛 )

Step 03: Once the shelves had their braces, I marked where I wanted them on the wall (there is 1 foot of space between each shelf) and I screwed the braces where I had marked. 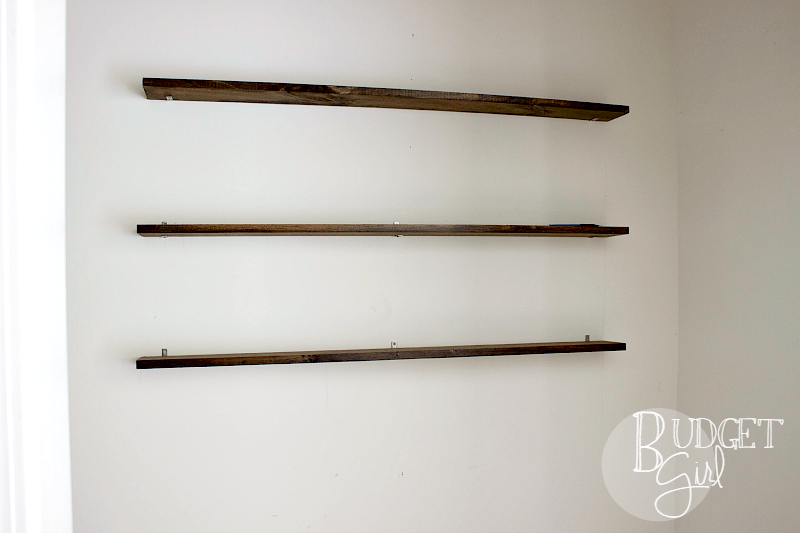 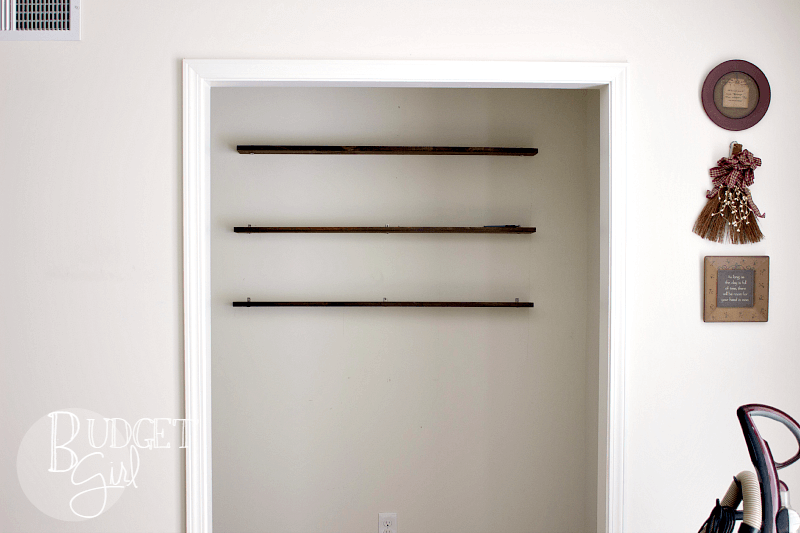 That part was actually really hard to do with just me. I honestly should have waited until Zach got home, because holding the wood and marking the wall (since the wood was so long) and screwing it in was a challenge.

You can also see that I set the brackets up so they were above the shelves. You can do it either way, but I did it this way so I could set stuff up in front of them. And then they’re invisible!

From there, all I needed to do was decorate! 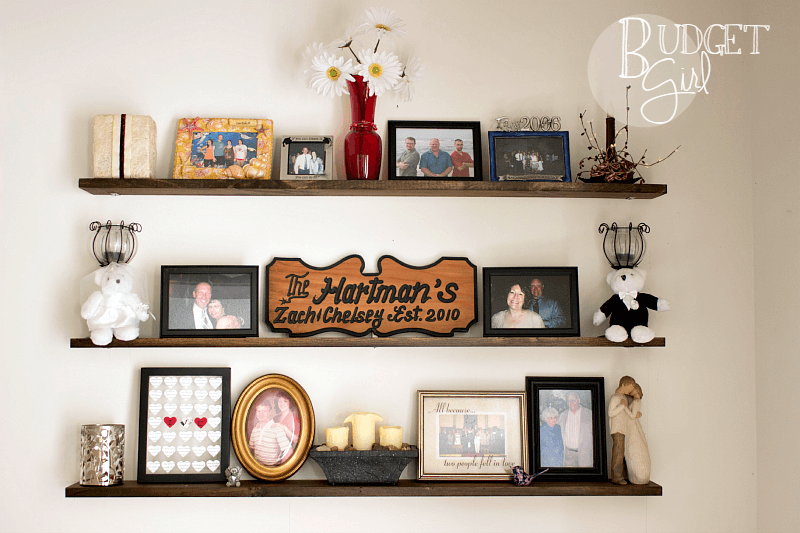 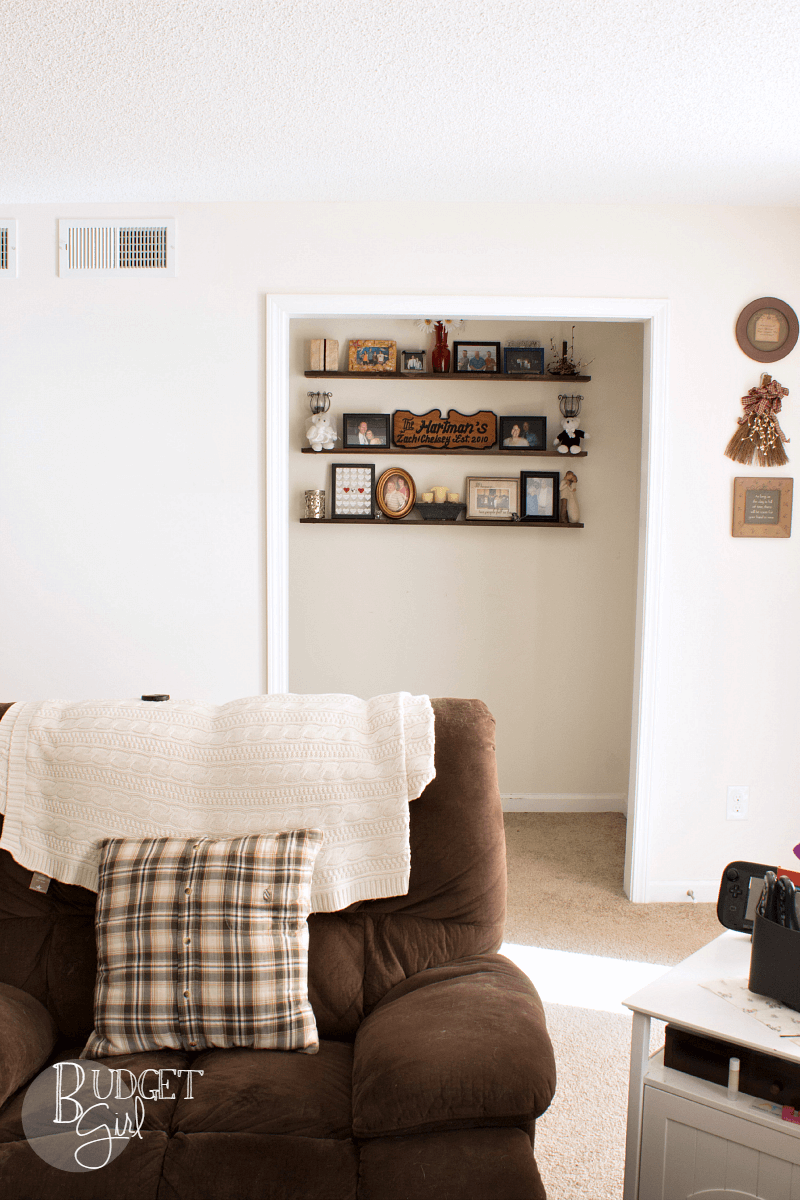 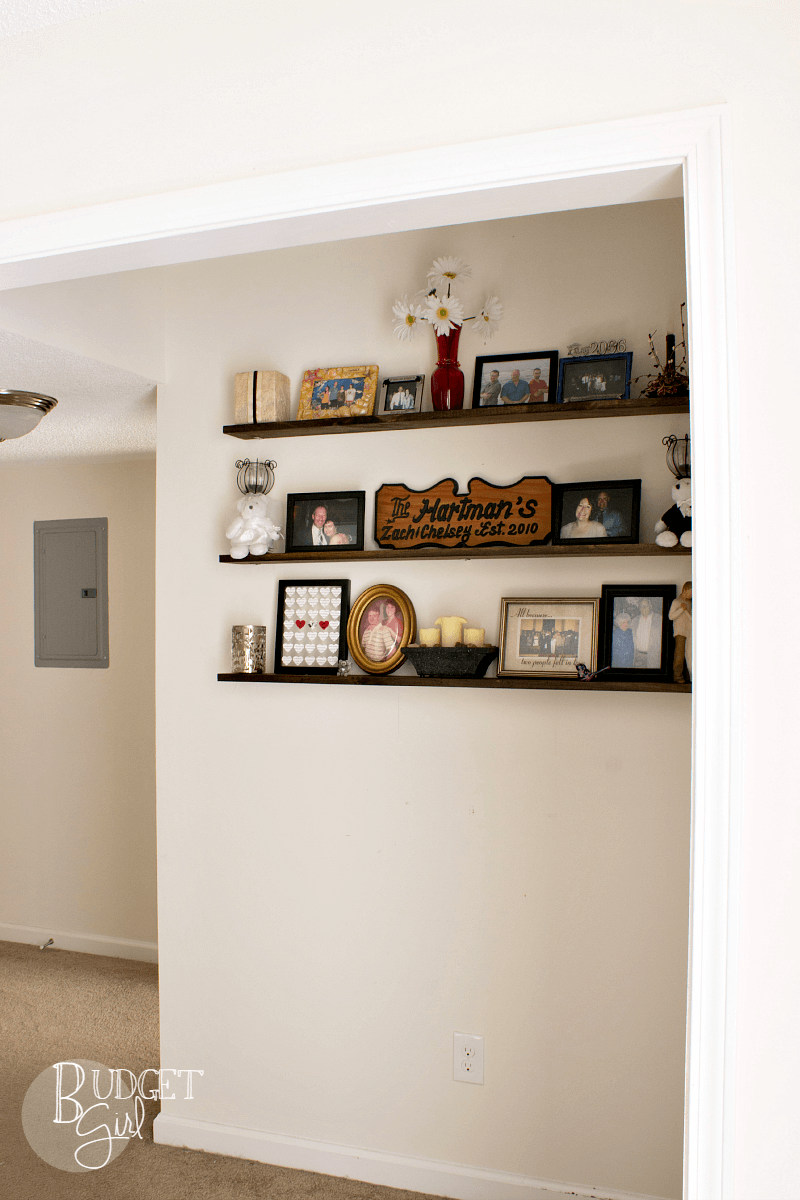 (I think I’ll want to put something over that breaker box at some point, but I’m not sure what….)

This project cost me less than $20 and now I have some pretty shelves to display everything on! Including my wedding song art, which had been sitting in my bedroom for a year because I couldn’t find a place to put it! I’m very happy with this, though I’ll probably find a better arrangement for everything.

My only complaint is that I overcompensated for my shortness (I didn’t want them to be too low!) and put them up a little two high. I would like to see them about 2-3 inches lower. Ah well. They go really well with the overall feel of my living room, though! Which is finally coming together (after living here for more than a year, I should hope so), which means I can actually show you pictures of the rest of the room (mostly)! 😛 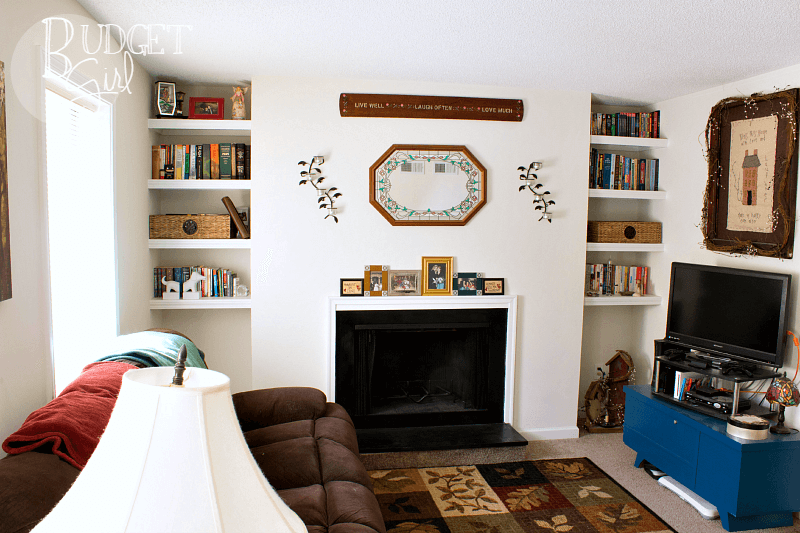 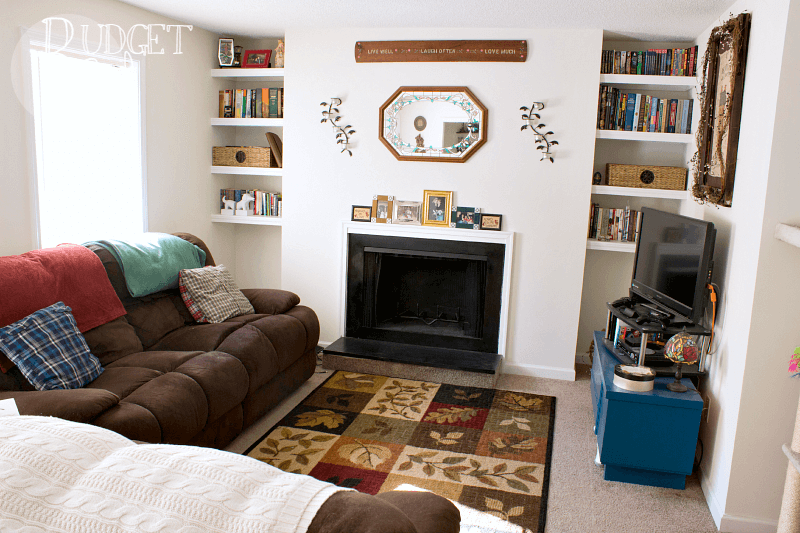 A couple other (small) changes have been made since this photo, but they’ll wait for another time. The living room is so cozy and I’m very happy with it. 😀 I just want to bring home some more of my old books (which are in my parents’ attic, 800 miles away) and fill that top left shelf with them for a more symmetrical look.

But my flannel shirt pillows are perfect and my cedar chest is making a great TV stand for now. It also introduces a fun, unexpected pop of color.

I’m not a huge fan of the fireplace, but we’re renting, so there’s not much I can do there.

And, yes, when Zach came home he was thrilled with the shelves…if only because he didn’t have to help me. 😛

How have you solved your own home decor problems? 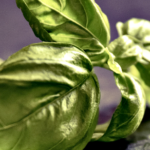 I just love the simplicity of these and how great they look after they’re set up. I’ve been wanting to put up shelves like this for a while now. Thanks for sharing!

Thanks, Denise! I’m pretty happy with how they turned out. 🙂

These look great and thanks for such clear instructions with great pics. Thanks for sharing with us at #anythinggoes

What a clever idea!! They look really nice, too!