This is a two-part recipe. I finally found a spaghetti squash at my hometown Kroger. I’ve been hearing from friends that they’re delicious, but my stores either 1) don’t sell them, or 2) are constantly sold out (which tells me they must be delicious). But I finally got my hands on one last week and have been waiting for Zach to get home so we could try it. Last night, I finally made it…and it was awesome.

Embarrassingly, I also recently discovered I could make my own pasta sauce (embarrassing because I can’t believe it never occurred to me before…but I guess that’s just how it works sometimes). I ran out while my sister was here and didn’t feel like going to the store (because screw putting on pants), so I dug out some tomato paste and made my own. Which is what I decided to do this time…except much more carefully. I’m going to share that recipe with you, as well as how I got the squash to spaghetti, since my squash (unlike some) didn’t come with instructions. So if you’re tempted to buy one but aren’t sure how to do it, it’s easy. 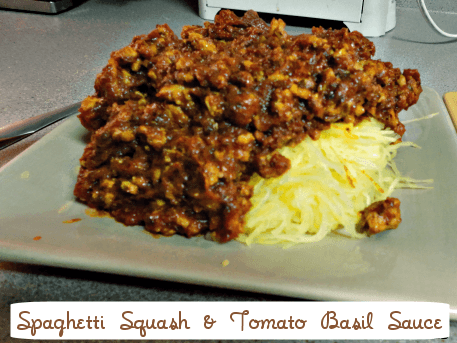 Step 01: Let’s start with the sauce. Mix all of the ingredients in a small saucepan. Let it simmer on low heat for 35-45 minutes, stirring occasionally. (Note: This recipe makes about 1 cup of sauce. Increase proportions as needed.)

Step 02: While that’s simmering, brown the chicken. This step is, obviously, optional. When the chicken is done, add it to the marinara.

Step 03: The sauce is done, so keep it warm while you work on the squash. Preheat your oven to 375°F…if it’s your method of cooking it. (It doesn’t matter how you cook this thing, as long as it’s hot enough to turn into spaghetti when you’re done–you can also boil or microwave it. I prefer the oven.) Start by heating it in the microwave for about 1 minute and then cutting it open. (Although, you do not have to cut it open before cooking it. If you find it too difficult to cut it while it’s uncooked, cook it and then cut it. Though you probably want to boil it if you do that.)

Step 04: Take either a spoon or a melon baller (the latter is easier) and scrape the pulp and seeds out of the squash.

Step 06: Bake for 30 minutes. When it’s done, take a fork and run it through the inside flesh of the squash. It should just turn into spaghetti.

Step 07: Top with sauce and enjoy!

Also added way too much chicken to it. It’s a good thing I like chicken. Not bad for my first try, though.

In case you’re wondering, spaghetti squash is a really good substitute for regular spaghetti. Actually, I think I like it more than regular spaghetti. It also keeps well in the refrigerator, which is great because this plate was way too much (and those are our small plates). I think you could easily get four servings out of one squash, even if it doesn’t look like much when you’re making it.

In case you’re wondering, other methods of making a spaghetti squash:

Boiling:~20 minutes
Microwaving: 6-8 minutes (let it sit for a few minutes before removing it)

If you choose to leave the squash whole, it will take longer.

Cleaning Out Your Bag

I have to try this! It’s especially great if you’re on a low-carb diet and can’t eat pasta (although I’m taking a break for Christmas, hehe).

That it is! They’re also so much more filling than pasta, too!