This is the husband, reporting for duty.  And that duty is the cooking of an awesome dinner.  Steak au poivre!  And it is certainly awesome, indeed.  Try not to be too jealous of the skills I totally ripped off a Youtube video of Marco Pierre White.  He gets into a bit more detail and fancy stuff, so I tweaked the recipe for the budget-conscious and for ease of preparation.  It takes like 10-15 minutes to cook, and it tastes like amazing. 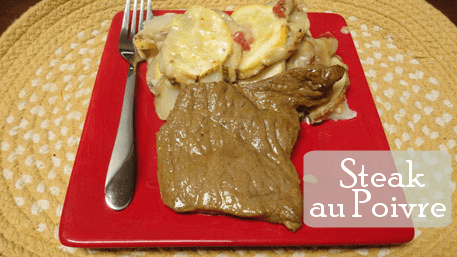 It’s a simple ingredient list.  Preparation is similarly not too challenging!  Get your steak on a cutting board!

There are two of us in the apartment, so generally we like to prepare more than one serving.  Rather than trying (and failing) to share, I cut this bad boy into two pieces.

Lovely lovely lovely!  At this point you will want to start heating your frying pan with some oil to get it good and hot.  We use the setting #7 on our electric stove, but just get it to where it will sizzle like crazy when the steak goes in.  Next, we’re going to prepare something to coat the meat.  In traditional steak au poivre, I’m pretty sure this will be salt and pepper that will eventually form a sort of crust.  Marco says to use stock cubes, aka bouillon!  So that’s what I do.  Get about 1-2 tbsp olive oil and two cubes (one per steak).

Next, you will want to mash them up using a spoon or an otherwise appropriate appendage until it is blended somewhat…

At the end, the paste should look something like this!

Overall, the purpose of this is many-fold.  One, when it is mixed in the oil like this, it can stick to the steak better, and it creates awesome flavor.  Salt and pepper, especially the salt part, will dissolve away rapidly during subsequent steps.  Also, this paste is easy to make and has me feeling kinda fancy.  “I made a bouillon paste to coat my steak au poivre.  Oui oui!”

The next step is to coat the steaks in this paste.  Be sure to get both sides.  Yes, it is kind of messy.

Now you are ready to get some color on those bad boys.  Hopefully, your pan is quite hot.  Basically, a drop of water would make a fair amount of noise in the oil when it’s ready.  Place the steaks in the pan.

Now, the only goal here is to seal the meat.  The jury is out on whether this does anything or even if it dries the meat out as you cook it.  I don’t give one hoot about that.  I just listen to Marco!  The reduction that we’ll be making later will ensure that the meat will not seem dry in the least, anyway.  These steaks took about 30 seconds on each side to get a little brown.  Once you have that, set them aside on a plate.  They will finish cooking later.

Now we can use the hot pan to make our reduction.  This will be flavored by the cooked paste and oil that’s already in the pan along with a generous helping of Worcestershire sauce.  Add about this much to the pan…. (If I had to guess, I’d say it’s about 1/4 cup.)

And keep it on that medium-high heat to get it simmering.  The idea is to reduce some of the volume here so you will get a greater flavor out of it.  I give it around 2-3 minutes before I get impatient and proceed, but you can adjust however you like to get the flavor you want.  Now it’s time to add the whipping cream!

Mix it well and quickly so you don’t risk cooking the cream itself.

When you have mixed it sufficiently, you will end up with a lighter, creamier sauce.  You can add more whipping cream to get exactly the color and flavor you want.  Less cream, and it will be more intense.  More cream, and the Worcestershire sauce will be cut out immensely.  This color I have found gives a good balance for my taste.

Once you get the mixture simmering, you can add the meat back into the pan to finish cooking.  This process can vary depending on the thickness of the meat and how done you want it.  I like my steak to be done, but the cuts of these ones were quite thin, as you can tell.  So they were finished off in a few minutes.  The first time I tried cooking this dish, it took upwards of ten minutes to get it right with steaks that were around 3/4 inches thick.

And that’s it!  You are now ready to eat.  We usually serve this with a salad or mixed vegetables, but Chelsey had the rather awesome idea of making a vegetable tian to go along with the steak.  The tian itself is good, especially with the Thanksgiving modification of more cheese on top.  The leftover sauce from the steak also makes a fantastic topping for starchy vegetables.  Therefore, a baked potato works very well, also!

Eat it.  Enjoy it.  It’s French or something!  It’s also cheap and easy.  Even I could get it done!

Cleaning Out Your Bag