A soft and tender pie crust, made in a food processor. The perfect pie crust for any filling.

We all have different opinions of what the perfect pie crust is. Some like it flaky and tender, some like rich and creamy, some like it hard and burnt. Some don’t even like pie crust.

I love all pie crusts. It’s my favorite part of the pie. Though I have my preferences, I’m really not too picky about it.

So today, I’m not only going to show you my favorite pie crust recipe, I’ll explain how to get different crusts with all of these characteristics so you can create your perfect pie crust.

First, you have to understand the differences in ingredients. Some people use butter to make crusts and some use vegetable shortening. The difference is in their melting points.

Vegetable shortening has a higher melting point than butter. Shortening starts to melt between 117°F and 119°F, while butter melts between 90°F and 95°F. This is why shortening is fine to keep in the cupboard above your stove (as long as you put it on the top shelf), but butter starts to turn into mush (soften) if you leave it on the counter for extended periods of time.

Because shortening can withstand higher temperatures, it melts more slowly in your oven. This creates air pockets in the dough, resulting in a flaky crust.

Butter can be used to create a flaky crust, but not as easily. It has to be extremely cold to begin with if you want it to melt more slowly, so you basically have to freeze it (and blend it into the dough still frozen, so good luck with that) to get the same result. Otherwise, its lower melting point allows it to blend into the dough more easily, resulting in a richer, creamier crust. My husband would describe this crust as “cake-y.”

My perfect pie crust uses both shortening and butter. 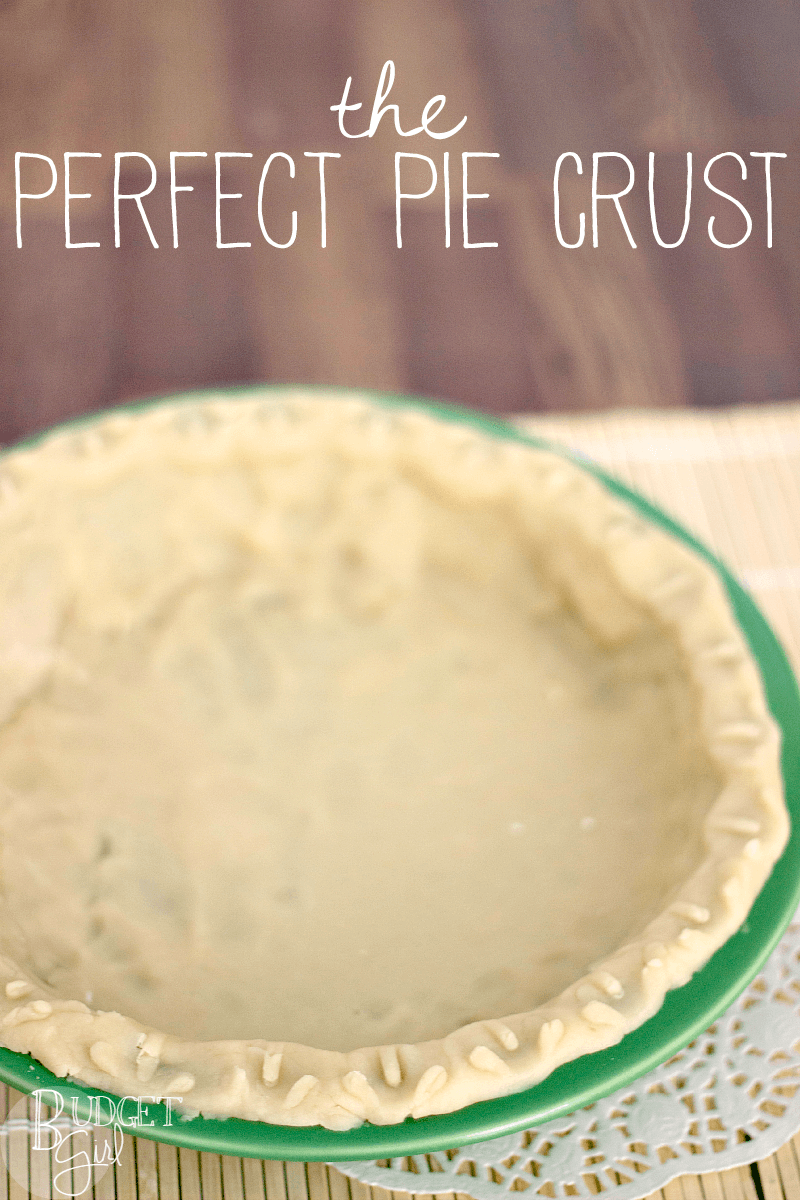 Step 01: Combine the flour, sugar, and salt in a food processor. Add the butter and shortening and process until crumbs start to form.

Step 02: Add 3 tbsps of the ice water and pulse until dough starts to form. Add the fourth tbsp if needed (add it one teaspoon at a time. For your reference, there are three teaspoons in a tablespoon).

Step 03: Remove from the food processor and flatten with a rolling pin.

Step 04: Put the dough in a pie pan, trimming and decorating the edges as desired. Store in the refrigerator for one hour to chill. Or put it in the freezer for 20 minutes while you preheat your oven.

Add the filling after it comes out of the freezer, not before putting it in there.

You can actually chill the dough before rolling it out, which will make it a bit easier to work with. But I usually just do it once it’s in the pan.

Chilling is important, though, because it gives the dough time to relax which can prevent it from shrinking too much when it bakes. A little shrinking is inevitable, though, so be sure to give your crust plenty of overhang. 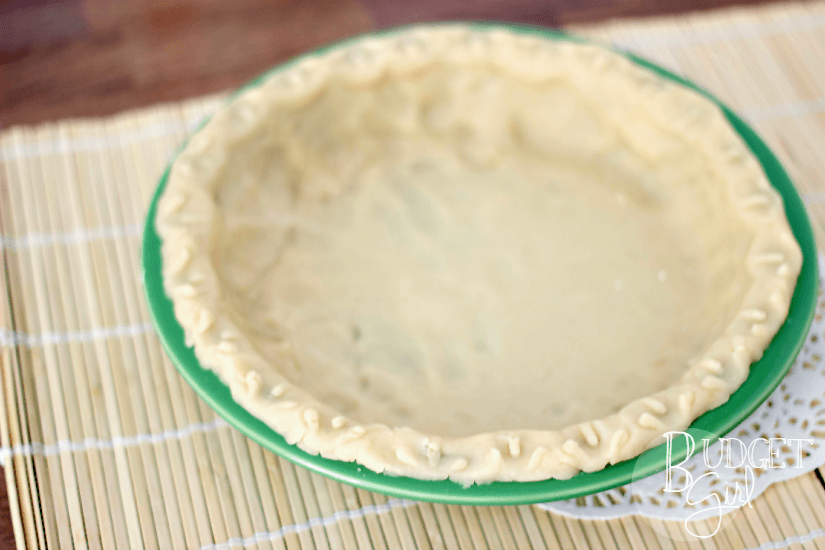 Some people are wizards at decorating their pie crusts. I am not one of those people. I press a fork around the edges and that’s generally as artistic as my pies get. 😛 Maybe one day I’ll take the time to do something special with it.

I also take my trimmed off edges and add them to the base of the crust instead of throwing them away. Because yum (and also because I have a tendency to over-flatten one side, which then thins and tears…the extra dough fills in the holes :P).

For this particular crust, I actually put the ball of dough in my pan and pressed it flat, rather than rolling it and transferring to the pan. Mostly I did this because I didn’t feel like cleaning my counters. 😛 If you’re not worried about how it looks, this is fine. If you want to roll it out flat, though, here are some tips.

A little info about rolling pins:

There are many kinds of rolling pins you can use. I’ve used metal, marble, and plain wood pins. So far? I’m not a huge fan of metal. The marble (I use this one) is nice and easy to clean, but VERY heavy and dough sticks to it easily. I also have a love/hate relationship with the handles. Sometimes they work great, other times they get in the way. For that reason, I really like French rolling pins. Plus I find that wooden rolling pins are easier to use than marble, mostly because they’re lighter.

The drawback to a wooden rolling pin is that you need to care for it differently. In general, my marble pin is fine to wipe clean and put away. Wood needs to be thoroughly cleaned (since it’s porous, bacteria has more places to hide) and then quickly dried–water should never be left to sit on it. It also needs to be conditioned with mineral oil every so often to keep it from drying out and splitting.

So the type of rolling pin you use depends on your needs and levels of laziness. Mine are pretty high, so I normally just use the marble pin. 😛 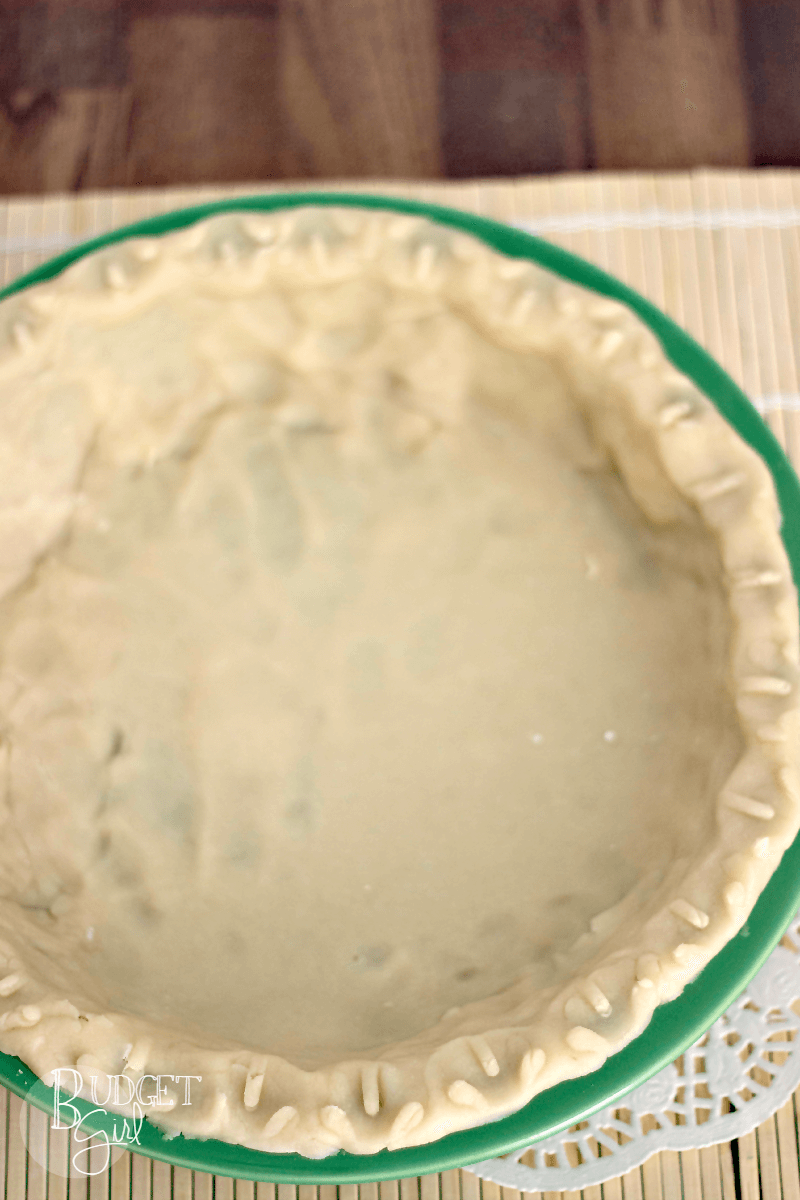 You can make this pie crust one day ahead of time. Cover it and store it in the fridge. It does not need to be baked on its own (unless you like your crust burnt, in which case, by all means). When you’re ready to bake your pie, just add the filling and bake according to the directions for the filling.

So far I’ve used this crust to make I marbled pumpkin pie, blackberry pie, and apple pie (coming soon!). I haven’t been disappointed.

How do you prefer your pie crust?

Combine the flour, sugar, and salt in a food processor. Add the butter and shortening and process until crumbs start to form.

Add 3 tbsps of the ice water and pulse until dough starts to form. Add the fourth tbsp if needed (add it one teaspoon at a time. For your reference, there are three teaspoons in a tablespoon).

Remove from the food processor and flatten with a rolling pin.

Put the dough in a pie pan, trimming and decorating the edges as desired. Store in the refrigerator for one hour to chill. Or put it in the freezer for 20 minutes while you preheat your oven. 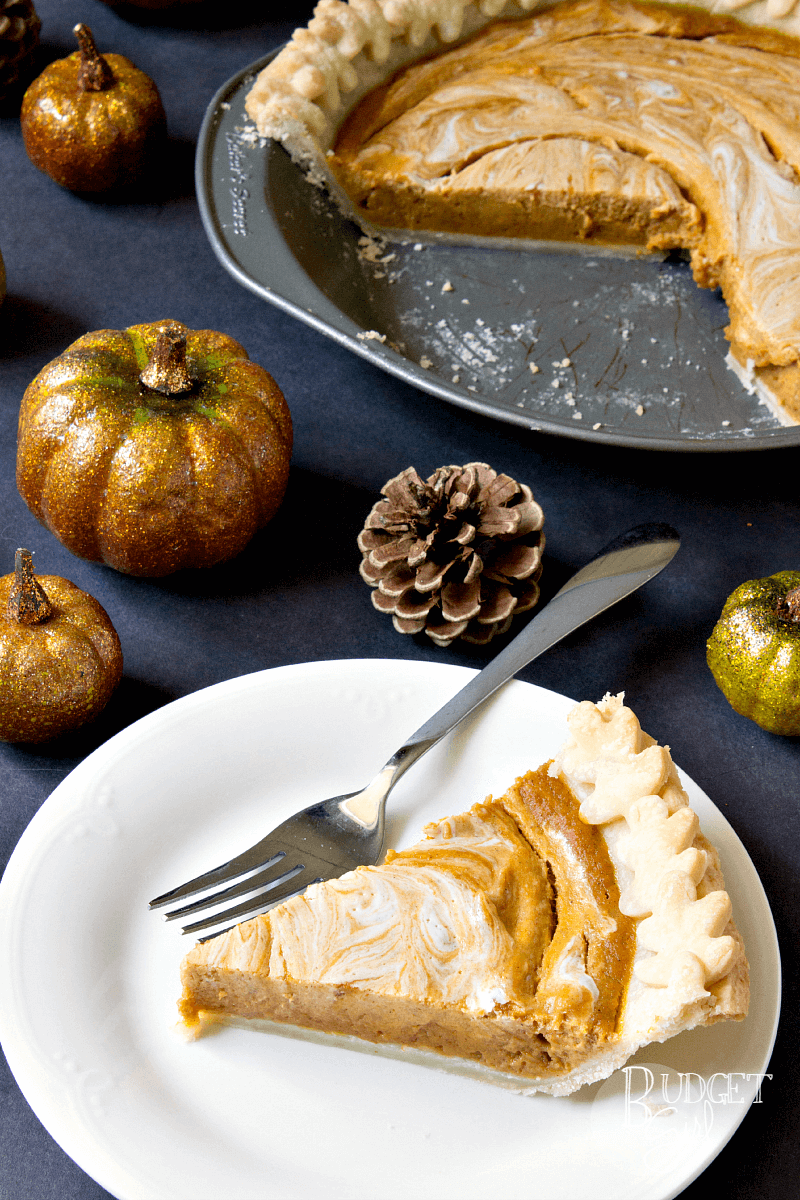 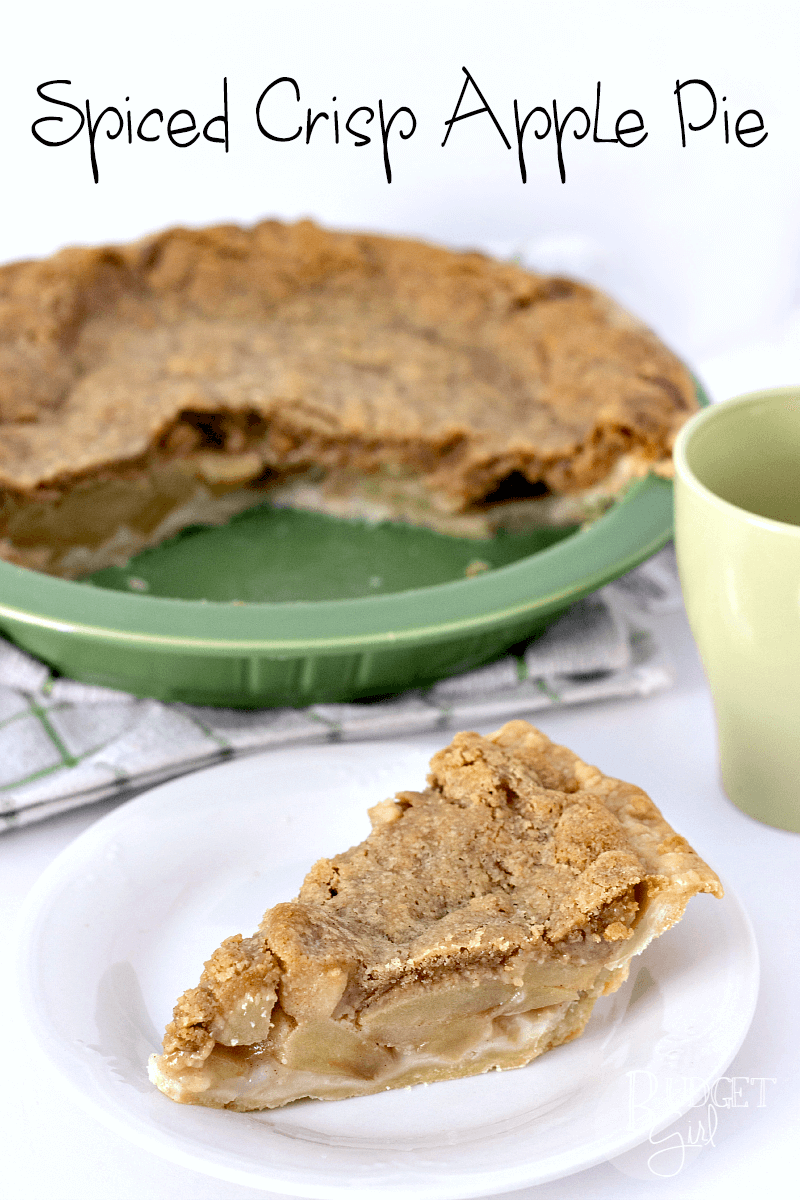 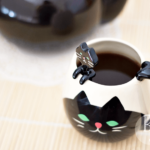 How to Make Coffee Without a Coffee Pot

Wow! This looks really great, and how much better than just buying a frozen pie crust! I am pinning this and featuring you tomorrow at my Thursday Link Party! Come on over and grab a ‘featured on button’ and link back up! Thanks again, Allyson @Domestic Superhero

Love that you use both butter and shortening to get the best of both worlds in one pie crust. I also love that you use the food processor to combine everything. It’s actually the only way I’ve made a successful pie crust without hating the whole process.

Yes! My food processor makes life SO much easier! Without it, I’d just buy pre-made crusts and be done with it. 😛

I didn’t know about the different melting points and how that effects the pie crust. I guess that is why it’s recommended to put the pastry in the fridge first. You’ve encouraged me to give crusts another go.

My first pie crust wasn’t so great. I don’t know who came up with the phrase, “Easy as pie,” because pie is NOT easy. Good luck! 🙂

Homemade pie crust has long been a nemesis of mine! These tips – especially about the different melting temperatures – are bound to make my next pie crust perfect! Stopping by from Turn it Up Tuedsay

Hope it helps, Kelly! Pie crust can be such a pain. Good luck!

I’ve been trying my hand at pie crust for a couple of years now. I love baking and pie crust has always been one of those things that scared me. I’m definitely going to give this a try. I have been in search for the perfect recipe for a while now. Thanks for sharing! 🙂

I’m with you. A good pie crust can MAKE the pie. Thanks for your recipe. Thanks for sharing at the #AnythingGoes Link Party.