Today is my third wedding anniversary! Our plans are simple, but we’re very excited. That’s also where Zach and I went for our honeymoon. We stayed in the Wet N’ Wild cabin through Cabins of the Smokey Mountains and it was wonderful. Though the prices have skyrocketed since our visit. I’d love to go back to it, though. The view was breathtaking and the cabin was so relaxing. It had its own indoor pool (score!), a sauna that we couldn’t figure out how to use, a jacuzzi in the living room (which meant we spent the first night there in the jacuzzi with terrible champagne–not that I’ve ever had champagne that wasn’t terrible–watching Ghostbusters and Ghostbusters 2 because Zach had never seen them…not even joking), and a hot tub attached to the basement. It also had a pool table in the living room. I want to build a replica of that cabin and live in it. 😛

Anyway! I got totally off track there. While we were on our honeymoon, we discovered this winery called Mountain Valley Vineyard. There, we found the best red wine I’ve ever had (keep in mind, I prefer very sweet red wines…but they also had nice white ones! I didn’t try the dry wines, though). We bought about twelve bottles of it (it was a vacation, guys!). I’ve never been able to find another wine that I like quite as much. So when I went back with my mom, we stopped at the winery and I grabbed three bottles, saving two for our anniversary!

The bride and groom wine costumes (?) came from my aunt. They were on two bottles of champagne that were on the bridal table.

We’re also going to get our favorite Chicago-style pizza from Varsity Club (down the street from our apartment) and watch Mystery Science Theater 3000. Yep. Those are our only plans. 😀

So three years after the wedding, what advice could I give? Simply, pick decorations that you can continue to use once the wedding is over. My ceremony lasted less than ten minutes (I told the preacher to get right to it, because I didn’t want any of that fluffy stuff. The ceremony began at 5:30 and ended at 5:40. Sweet and simple), so I chose not to decorate the church at all. We used minimal decorations for the reception (we concentrated most of our funds on booze and food). The majority of the decorations we had are being reused as home decor…or we pass them around to other people getting married (like the heart-shaped candy dishes…I have one and the rest are in a box, waiting for someone else to use them…they were originally used at my aunt’s second wedding, a year before my own). Some examples:

This is my favorite. It was our cake topper!

On the side of the dress is a quote:

“Now join your hands, and with your hands your hearts.” — Shakespeare

That quote is from Henry VI and it is actually not about love. What it is referring to is cooperation in government, in a scene where King Henry VI hands government control over to Warwick and George because he believes it is what is best for the people (originally it was just Warwick, but Warwick said George was more deserving, so Henry VI gave it to both of them, calling them the Protectors of England). It’s still a nice quote out of context and I love Shakespeare (I got my BA in English, so, uh, yeah). My mom saw it online and said, “You have to have this.” Now it sits on a shelf in my living room, along with a family picture from Christmas, a picture from our wedding, and a picture from my parents’ wedding.

Oh, if you’re wondering, I got the cake topper from Gina Freehill’s Language of Love collection. And she is an incredibly nice lady. When we went to order it, they were out of stock. So my mother called to ask when they would have them again and actually got to speak to the creator (Gina Freehill). I have no clue what they talked about exactly, but they were on the phone for a while and there was a lot of laughing on my mother’s part (new BFF?). A month later, she sent me this cake topper with her autograph on the bottom. Very nice!

2. “All Because Two People Fell in Love” Picture

This sat on our bridal table. Before I continue, basically all decorations were gifts from my aunt. 😛

It now hangs over the TV in the living room.

The small pictures were not used for our wedding, but it came in a set, apparently.

So this wasn’t a decoration at the wedding, but it’s one of my favorite things. This was also given by my aunt…she made it and gave it to me for my bridal shower. It’s adorable. I use it to hold candles and stuff.

4. Wedding Pictures in Our Bedroom

Not used for our wedding, but I got these frames at Bed Bath and Beyond. My favorite is the frame that holds the invitation. 😀 I also love the top picture of my in-laws because of the face they’re making:

They didn’t even look at each other before this picture. 😛

It also has one of my favorite pictures of my parents:

5. The Candlesticks and Bride and Groom Bears

These also sat on our bridal table. The candlesticks had these pretty, clear beads in them. I should fill them up again, because that was really pretty….

I have no idea where that candelabra thing went…. It was probably my aunt’s. 😛

I actually am trying to figure out what I want to do with this. For now, I have it hanging on a picture of Zach that sits on my dresser.

Yes, that is Jack Skellington and, yes, there is a reason. Originally we were going to have our wedding on Halloween. For many reasons (none of them involving pregnancy), we moved the wedding up to May. Sometimes I wish we had gone with the original Halloween plan, but c’est la vie.

The “throw garter” went to our friend, Jake. Though I don’t know what men are supposed to do with things like that…. O_O

7. The Bride and Groom Champagne Covers

These were pictured above. I keep them to have on wine for our anniversaries because they’re adorable. 😀

Many of you have seen this because I explained here how to make it. It has a wedding picture and the petals from my bouquet in it. I’ve also seen other variations that have a cork from the wedding champagne…very nice. I wish I had kept my cork.

Currently, the ornament is hanging on a cabinet in my living room.

I had pink carnations and yellow roses because I let my mom pick them out and that’s what she wanted. (My wedding happened a week after I finished college…I had more important things to do than plan it, so I let my mom just do whatever she wanted as long as people stayed out of my hair. I don’t recommend getting married that soon after graduating from anything.)

My cat ate most of the flowers I had left. But I saved a rose and put it in the ornament.

The decorations from my wedding are still the most interesting pieces I have. So, yes, get creative when decorating your own so you can reuse stuff. Definitely worth it. 😀

And happy anniversary to us!

And these were my shoes:

I’ll be figuring out what I want to do with those here soon. I’m thinking about dying them both and cutting the dress to about knee-length…if I can find someone to do it.) 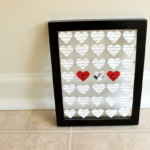 This is such a cute post, and you really made want to rent that cabin myself 🙂

Haha! I would recommend it–it was absolutely incredible! 😀