Yesterday I posted my almond butter to prepare you for what I was posting today. Fruit dip! I know that there are people in the paleo world who will consider this paleo…and people who won’t. Since almonds are legit nut, I consider it paleo. If you don’t…then don’t eat it if you’re on a paleo diet. That’s the only good advice I can give you.

This is a very healthy fruit dip and very delicious. Wow. I wasn’t expecting a lot of it, but when I tasted it I was pleasantly surprised. This is better than any cream cheese dip I’ve ever had. (Though if you want to stray from paleo, add some cream cheese and see what happens. Yum.) 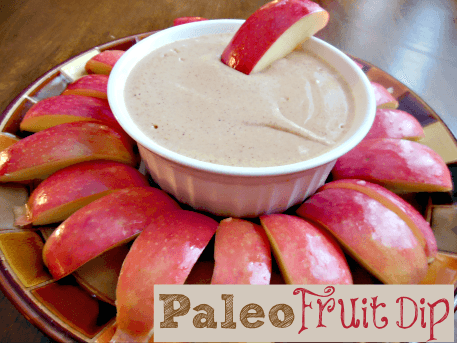 Step 01: Put all ingredients in a food processor or blender. Start out with the lowest amount of butter, milk, and sweetener (you can always add more, but you can’t take things away).

Step 02: Blend until all ingredients are combined and smooth. If your dip is too runny, add more butter. If it’s too thick, add more milk.

Where I got into trouble was not remembering that I use homemade almond milk and not store bought. The difference is that homemade almond milk is much thinner (because it doesn’t contain thickeners like xanthan gum). It’s more along the consistency of skim milk. So while the original recipe said to use 1 cup of almond milk, I really should have halved it and upped the amount of almond butter I was using. So, in the beginning, my dip was more of a…beverage. I only made 1 cup of almond butter, though. However! I had some chunky peanut butter in the cupboard, so I tossed about half a cup of that in and it was delicious. (I realize peanuts are not paleo, though, so I suggest finding another substitute if you’re strictly following the diet.)

If you’re using store bought almond milk, you could probably go with the full 1 cup of almond milk. However, I would start with 1/2 cup and see where that gets you and then gradually add the second 1/2 cup if you think you need it.

We cut up apples for the game, but this is really good on bananas.

Mmm, sounds delicious and just decadent enough for a dessert!

I found it both good for dessert and breakfast! 😛

It is both of those things! 😀

How long can you store this for?

In the fridge, I would say a week or two. If you freeze it, probably about 6 months.